The head is rather imposing and quite long, but never out of balance with the body. Not heavy or coarse.

The skull is rather narrow and lightly domed, with some prominence of occiput. The stop is slightly marked.

Long, preferably with an arched nasal bone. The lips cover the lower jaw and are well pigmented.

The Chien Francais Blanc et Noir has a complete set of evenly spaced, white teeth meeting in a scissors bite.

Dark, with an intelligent and trusting expression, and fully pigmented eyerims.

Set at eye level, and slightly curled, reaching to the nose.

Quite long and strong. Some dewlap is acceptable.

The shoulders are long, lean and oblique.

The legs are strong, and the elbows are close to the body.

The chest is deeper than broad. and is let down to the level of the elbow. The back is rather long, but firm. The loin is muscular and well coupled. The belly is slightly tucked up.

The hips are long and slanting.

The thighs are long and muscular. There is slight angulation at the hocks, and the rear pasterns are short.

Rather elongated, but lean and resistant.

Quite thick at the root, rather long, and carried elegantly.

White and black, with black or bluish speckling. Tan speckling is allowed on the legs. There are often tan markings on the head and under the tail and a tan ‘roebuck’ marking on the thigh. 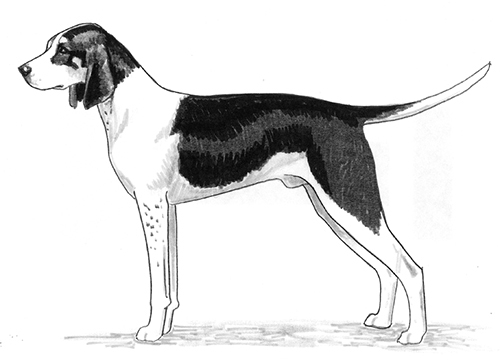