Formerly named the Picard, the Chien d’Artois is an ancient French hunting breed that is widely used on deer, hare and wild boar. They generally hunt in a small pack of six to eight hounds. Following the Second World War, it was feared that the breed was one that had been lost, but in the early 1970’s the breed was reconstructed in its homeland.

The Chien d’Artois was recognized by the United Kennel Club in 2006.

Vigorous and hard, with a well developed nose, and a strong pack instinct.

Strong, broad, and not too long, the skull is rounded on top, but there is no prominence of occiput. The stop is accentuated.

Slightly shorter than the skull, with a straight nasal bone. The upper lip covers the lower lip and forms a square profile.

The Chien d’Artois has a complete set of evenly spaced, white teeth meeting in a scissors bite.

The eyes are set rather well apart. They are round in shape and dark brown in color. The expression is soft and melancholy.

Set at eye level, broad at the base, and rounded at the tips. Nearly flat and quite long, reaching to the nose.

The shoulders are oblique and muscular.

Strong and vertical. The length of the foreleg is one half the height at the withers.

In proportion, the body is just slightly longer than tall. The chest is let down to the elbow, and the ribs are rounded. The back is broad and straight, and the loin is slightly arched. The croup inclines slightly. The flanks are full.

The hind legs are straight and parallel when viewed from behind. There is moderate angulation at the hock, and the rear pasterns are short and vertical.

Oval in shape, with tight toes and black pads.

Strong and quite long, the tail is carried in sickle fashion. There is a brush on the underside of the tail.

Dark fawn hound tricolor, similar to hare or badger, with a mantle or large patches. The head is usually fawn, sometimes with a black overlay.

Disqualification: Any color other than described.

Height for males and females is between 21and 23 inches at the withers. Weight is from 62 to 66 pounds.

(An Eliminating Fault is a Fault serious enough that it eliminates the dog from obtaining any awards in a conformation event.)
Height over or under the accepted measurements.

(A dog with a Disqualification must not be considered for placement in a conformation event, and must be reported to UKC.)
Unilateral or bilateral cryptorchid.
Viciousness or extreme shyness.
Albinism.
Overshot or undershot bite.
Yellow (hawk) eyes.
Any color other than described. 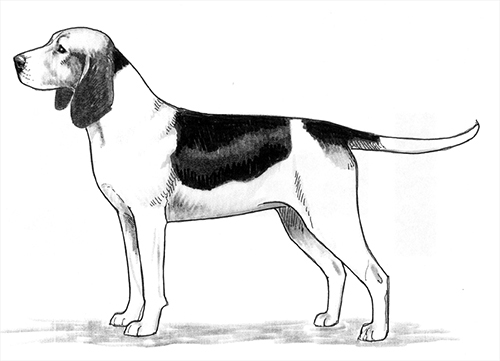