The Chart Polski is an ancient, short haired sighthound. Its presence in Poland has been attested to in literature since the 13th Century. The breed probably originated from the Asiatic sighthounds that were of Saluki type. The breed was historically used for hunting hare, fox, roe-deer, bustard and wolf.

The Chart Polski was recognized by the United Kennel Club January 1, 1996.

The Polish Greyhound is a dog of great size and commanding appearance, definitely stronger, more muscular and heavier boned than the other short-haired sighthounds. His strong frame, well-defined musculature and powerful jaws show him to be a hunting dog capable of working in the difficult conditions of the Polish country and climate. Though large and strong, he must never be overdone to the point of heaviness or lethargy.

The Chart Polski is self assured, confident, reserved and brave. He is a fast, skillful and untiring hunter and has a lively and penetrating gaze.

The head is long, lean and strong, with the muzzle as long as, or slightly longer than, the skull, and their top lines slightly divergent in profile. The skull and muzzle blend cleanly together at the sides of the head and there is a slight stop.

The upper part of the skull is flat. There is a slight frontal furrow, and the frontal bones and eyebrows are lightly marked.

The muzzle is very strong in front of the eyes. It tapers slightly towards the tip, but in no way appears to be pointed; instead it is rather blunt for a sighthound. The position of the nose is somewhat below the upper line of the muzzle. The lips are well defined, but clean and never pendulous. They do not cover the lower jaw.

The Chart Polski has a complete set of evenly spaced, white teeth meeting in a scissors or even bite.

Faults: Overshot, undershot or missing more than the first premolars.

The nose is large and dark, projecting above the lips.

The eyes are rather large, almond in shape, and set obliquely. In color, they range from dark brown to amber, depending on the color of the coat. Dark eyes are desirable. The characteristic expression is very important; it must be lively and penetrating.

Medium size, quite narrow and set at eye level. When pulled forward, the tip easily reaches to the inner corner of the eye. The ear cartilage is soft and gives the impression that the ears are fleshy. Ear carriage may be erect, tipped, rose or folded back.

Fault: Drop ears that hang flat against the sides of the head.

The neck is long, muscular and powerful. It is oval in profile, and rises gently from the withers. The head carriage is rather high, but at rest the Polish Greyhound carries the head slightly lower than the Greyhound.

The forequarters are well angulated.

Short coupled, with the distance from the point of shoulder to the point of the buttocks just slightly greater than the distance from the top of the withers to the ground. When the dog is free standing, the withers and the highest point of the croup should be at equal heights. The chest is spacious and well let down, preferably to the point of the elbow. The ribs are well sprung, arched but not barrel shaped. The ribs are long and slope backward. The topline is level to the loin, where it is slightly arched. In the female, an almost straight topline through the loin is not a fault. The loin is wide and muscular and the croup gently slanting, long, muscular and wide. The hipbones must be wide apart.

The hind legs are long and muscular, and the hindquarter is quite well angulated. Seen from behind, the legs should be parallel, but not set as wide apart as in the Greyhound.

The feathered tail is long and strong at the base. It should have a sickle shape at the tip, or even a complete ring. When at rest, the tail may hang fairly straight down. In motion, the tail is carried up, but the base should not be higher than the level of the loin.

Faults: Tail completely curled over the back, or carried sideways.

The coat is springy to the touch, rather harsh, but not wire-haired. Shortest on the belly and legs, the coat may be of variable lengths on the rest of the body. On the buttocks and tail, the hair is longest, but still harsh, and forms a modest breeching and brush. The skin is close fitting and elastic.

Ideal height for males is from 27.5 inches to 31.5 inches at the withers. For females, it is 26.5 inches to 29.5 inches. Sizes larger than this are acceptable as long as general balance and proportion are maintained. A slightly smaller dog is permitted if otherwise of outstanding quality.

Flowing and energetic. The front and rear quarters should be angulated to produce a long stride at both the walk and the trot. Single tracking of the hind legs at slow speeds is not a fault. 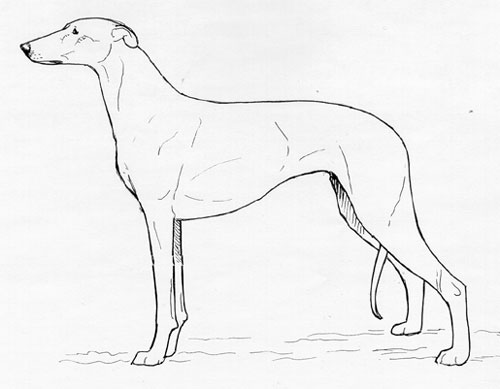