The Cesky Fousek (Bohemian Wire-Haired Pointing Griffon) was at one time the most widely kept pointing dog in the area of the modern day Czech and Slovakian Republics. During the First World War, the breed was nearly eradicated, but through carefully planned breedings it was brought back and today it is the second most popular of all hunting breeds in it’s original home territory.

The Cesky Fousek was recognized by the United Kennel Club January 1, 1996.

A medium sized, wire-haired pointer of noble appearance, the Cesky Fousek is a multi-purpose dog for field, water and woodland.

Despite strong hunting instincts, the breed is easily trained and devoted to its master.

The head is lean, long and somewhat narrow.

Moderately domed and slightly rounded, the skull is somewhat broader in males than in females. The head is angular, and the eye sockets are deep. The occiput is barely visible. The stop is moderate.

The muzzle is somewhat longer than the skull, and the nasal bridge is moderately arched. The muzzle narrows moderately in width from eyes to nose.

The Cesky Fousek has a complete set of evenly spaced, white teeth meeting in a scissors bite.

Broad, with open nostrils, the nose is always dark brown in color.

Deep set, almond shaped eyes are dark amber to dark chestnut in color and give a kind expression. The eyelids are close fitting.

Set on high and broad at the base, narrowing considerably towards the tips. The ends of the ears are moderately rounded, and the ears lie close to the cheeks.

Medium length, well muscled and moderately arched, the neck is set high on the withers and free of throatiness.

The shoulder blade is well muscled and very sloping, forming a blunt angle of 110 degrees with the upper arm.

The legs are straight, with dry, pronounced muscles. The pasterns are relatively short and slope only slightly.

The chest is deep to the elbow, and the forechest is well developed. From the side, the sternum should clearly protrude. The rib cage is oval. The back is short and firm, and slopes toward the croup. The loin is short, relatively broad and moderately arched. The croup is moderately sloping. The belly is tucked up but not to the point of giving the dog a lean appearance.

The pelvis must be sufficiently long, and forms an angle of 110 degrees with the femur.

The upper thigh is broad, and there is good angulation at the stifle. The hock is lean and not too high, and the rear pastern is short and almost vertical.

Compact and spoon shaped, with well arched toes and thick, coarse pads. There is noticeable webbing between the toes.

Set on as a continuation of the topline, and carried horizontally or only slightly above. The tail is generally docked to 3/5 of its natural length.

The undercoat is short, soft and dense. The topcoat is harsh, coarse and close fitting, one to one and a half inches long. There is additional longer guard hair that is harsh and straight, particularly noticeable on the forechest, shoulders, flanks and topline. On the front of the legs, the coat is shorter; on the backs of the legs, it forms feathering. There is no brush on the tail. On the head, the hair is longer and softer on the lips and the chin, forming a typical beard. The hair over the eyes forms eyebrows that point upwards. The forehead, skull and cheeks are covered with short hair. The ear leathers are covered with short, smooth, softer hair.

Faults: Insufficiently defined beard or eyebrows. Coat too soft, too short or too long.

Acceptable colors are: dark roan, with or without brown patches; brown with ticked markings on the forechest and lower legs; brown without any markings.

Movement at the walk and trot should be completely regular, with the back carried firmly, and the footprints virtually covering each other at the trot. 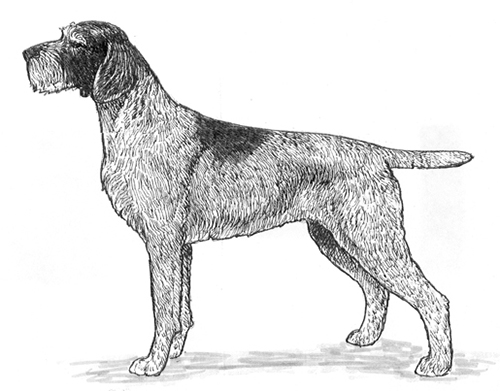