For thousands of years, large, heavily-built dogs with cropped ears and tails have been used by the nomadic tribes of Central Asia to protect livestock from predators and other property from thieves. The breed developed as a result of rather harsh, natural selection. The climate in the countries where the Central Asian Shepherd Dog developed ranges from hot and dry, to bitterly cold and windy. Only the hardiest of pups survived and only those with strong guarding instincts were allowed to stay with the flocks. Working Central Asian Shepherd Dogs are still found today in Afghanistan, Iran, Kazakhstan, Kirgyzstan, Tadjikistan, Turkmenistan, and Uzbekistan. The breed is still very rare in the United States.

The Central Asian Shepherd Dog is a dog of great size with massive bone structure and powerful muscles. The body is slightly longer than tall. The head is massive. Ears are normally cropped close to the head but are naturally small, drop, and set low on the head. The tail is high set and thick at the base, and when undocked, hangs down to the hock with a sickle shape. Two coat lengths are accepted, but all are double-coated and thick. Gender differences are well expressed in this breed. Males are more massive and powerful; females are smaller and lighter in build. Dogs should be presented in hard, muscular condition. The Central Asian Shepherd Dog should be evaluated as a working livestock guardian dog, and exaggerations or faults should be penalized in proportion to how much they interfere with the dogs ability to work. Honorable scars resulting from field work are not to be penalized.

For centuries, the Central Asian Shepherd Dog worked alone or together with several other dogs, without much intervention from the herdsmen, relying on its own intelligence and instincts to do its job. While these dogs are very devoted to their family members, they expect to be treated with respect. They are inclined to be suspicious of strange people or dogs. Central Asians are steady, even-tempered dogs who adjust well to change in their environment. When threatened, they react quickly and with complete seriousness. Central Asians are slow to mature and require extensive socialization and patient training techniques. This breed is hardy and able to adapt to a wide range of climates.

Serious Faults: Irritable, nervous or fearful dogs are to be severely penalized.

The head is proportionate to the body. Viewed in profile, the stop is slight and the forehead is flat. The planes of the topskull and the bridge of the muzzle are parallel.

The skull is broad and massive with well-developed zygomatic arches. Cheeks are well developed but not prominent. The occiput is smoothed out by well-developed muscle tissue.

Viewed in profile, the muzzle is deep and blunt, slightly shorter than the length of skull, and well filled up under the eyes. Viewed from above, the muzzle is wide at its base and tapers very little toward the nose. The upper lip is thick and hangs over the strong, wide lower jaw.

The jaw provides ample space for a full complement of large, evenly spaced, white teeth meeting in a scissors bite. The line of the incisors is straight and perpendicular to the outside lines of the jaw. Broken teeth should not be penalized provided they do not prevent accurate assessment of the bite. A level bite is acceptable but not preferred.

Nose is large, broad, and black. Some fading of nose pigment is acceptable in white and light fawn colored dogs.

Eyes are dark, oval and of small to medium size. They are set straight, deep and wide apart. The eyelids are fully pigmented.

Ears may be cropped or uncropped. Uncropped, the ears are small, pendent, triangular, and set at or below eye level.

The neck is powerful and short, and is carried at an angle of 35 to 40 degrees to the line of the back. The length of the neck, from occiput to withers, should be about equal to the length of the head, from occiput to the tip of the nose. The neck tapers little and is almost round in cross-section. The skin of the neck is thick with well-developed and elastic subcutaneous tissue folds around the neck.

The shoulder blade is long, well muscled, and moderately laid back, forming, with the upper arm, an angle of about 100 degrees. Viewed from the front, the forelegs are straight, and set parallel and well apart. Leg bones are massive and round in cross-section. Legs are set well under the body. The length of the front leg (measured from point of elbow to the ground) should equal slightly more than one-half of the dogs height (measured at the withers). The pasterns are short, massive, and, when viewed from the side, slightly sloping.

The Central Asian Shepherd Dog is slightly longer than tall. The ribs are well sprung and let down to, or slightly below, the elbows. The chest is broad and deep. The line of the back declines very slightly downward from broad, muscular, prominent withers to a strong, broad back with a straight upper line. The loin is short, broad, muscular and slightly arched. The croup is broad, long, muscular, and slightly sloped. Tuck-up is moderate. The skin is thick and elastic.

The rear legs are well boned and moderately angulated at stifle and hock joints. The hocks are strong, broad, and well let down. Viewed from the rear, the rear pasterns are parallel to each other. From the side, they are perpendicular to the ground. When standing normally, the rear legs are spaced moderately apart and positioned so that a line dropped from the point of buttocks to the ground would fall just behind the point of hock.

Faults: Hocks turned inward or outward; legs set too closely together or too far apart.
Serious Faults: Over-angulated stifles or hocks; rear legs extended too far behind the dog.

The front feet are large and oval with well arched, firm, and compact toes. Dewclaws may be removed.

The tail is set on high and may be docked close to the body or natural. An undocked tail is thick at the base, and tapering to the tip. When the dog is in repose, the tail just reaches to the hock, with the bottom third of the tail forming a hook. When the dog is in action or excited, the tail is carried as a sickle-shaped hook or ring above the level of the back.

The Central Asian Shepherd Dog has a double coat consisting of longer, coarse outer guard hairs and dense undercoat made up of soft, fine hair. Coat on the muzzle, forehead, and the front of the legs is short and smooth. Two types of coat lengths are accepted without preference:

The hair of the outer coat is 2 - 3 inches in length, with well-developed furnishings on the ears, neck, back of the hind legs and on the tail.

The hair of the outer coat is 1 - 2 inches in length, with no furnishings.

At the trot, the Central Asian moves freely with strides of moderate length, usually unhurried. The back remains level, and the front and rear legs on each side move in a parallel fashion. The front and rear pasterns flex freely. The back and loin are elastic and springy. As speed increases, however, the width between the legs decreases and the tendency to single track increases until the dog breaks into a heavy, lumbering gallop.

(A dog with a Disqualification must not be considered for placement in a conformation event, and must be reported to UKC.)
Unilateral or bilateral cryptorchid.
Extreme viciousness or shyness.
Missing teeth other than a single premolar.
Overshot bite or undershot bite.
Wry mouth.
Soft, curly or wavy coat.
Albinism.

Note: Central Asian Shepherd Dogs are not to be penalized for mild dog aggression, as it is a normal characteristic of this breed. Handlers, however, may be penalized for failure to properly control their dogs. 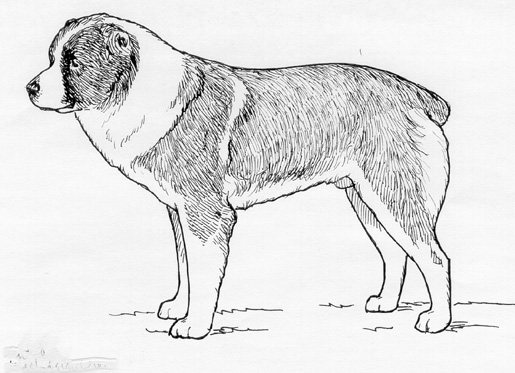