The Caucasian Ovcharka, also sometimes known as the Caucasian Mountain Dog, is a guardian breed from the Caucasus Mountain area. The breed's origin is shrouded in antiquity. Some claim the breed is a domestication of the wolves of this region, others that the breed developed from Mastiff-Spitz crosses. Some experts contend that the breed naturally developed from a group of sheepdogs that migrated to the Caucasus from Tibet. More recent archaeological findings point to breed origins in Mesopotamia.

What is known for certain is that herdsmen in the mountains of Georgia, Armenia, Azerbaijan, Daghestan, and surrounding countries, and the steppe regions of the northern Caucasus, have for centuries depended on the Caucasian Ovcharka to guard flocks and villages. Legends are written of the breed's faithfulness, protectiveness, and ferocity when called upon to defend. Type varies geographically throughout the mountain range, and also varies according to the purpose for which the dogs were used. Generally, dogs of the trans-Caucasus regions are more massive, while those found in the steppe regions have a somewhat rangier build, are leggier, and are often short-coated. Modern breeding conforms to a single standard.

The former Soviet government developed state kennels and used the breed for guarding factories and government facilities throughout the former U.S.S.R. In the United States, Caucasian Ovcharka have earned a reputation as trustworthy service dogs.

The United Kennel Club recognized the Caucasian Mountain Dog in 1995.

The Caucasian Ovcharka is a powerful, athletic dog, strongly muscled, and heavily boned in proportion to height. The head is large, wedge-shaped, and tapers slightly to a blunt muzzle with high-set hanging ears, which may be cropped, and deep-set, oval-shaped eyes. The thick tail hangs down to the hock but may be carried above the back as a sickle-shaped hook or ring when the dog is excited or moving. Three coat lengths are accepted, all double-coated and thick. Coat colors include shades of agouti gray, fawn, and reddish, with white markings and often a dark facial mask. Solid white dogs with dark pigmentation occur occasionally in the breed. Gender differences are well expressed in this breed. Males are more massive and more powerful; females are smaller and lighter in build. Honorable scars resulting from field work are not to be penalized.

Caucasians are spirited, intelligent, strong-willed guardian dogs. While gentle and demonstrative with family members, the Caucasian’s active defense reaction and strong territorial instincts make this breed very suspicious of strange people or dogs. They are steady and even tempered but will protect their flock, family, and property from danger - real or perceived - with lightning-quick speed. Caucasian Ovcharka have keen senses, so they are very alert and good trackers. Any change in their surroundings can result in warning barks and growls, particularly at night. The breed is slow to mature and headstrong. Socialization and patient training techniques can be used to temper the Caucasian Ovcharka’s characteristic suspicion and aggressiveness toward strange people and dogs, resulting in a mature dog with good judgment. This breed is hardy and able to adapt to a wide range of climates.

The head is large, with a broad skull and strongly developed cheek bones. Viewed from the top, the gradually tapering skull and muzzle form a one-piece, blunt wedge shape. The stop is slightly defined and not abrupt. The width of the head is emphasized by dense coat that stands away from the sides of the jaws. The male head is more massive than the female head, which is more refined.

The skull is flat, broad, and divided by a slight median furrow. The width of the skull is equal to its length. The skull tapers just slightly toward the muzzle.

The jaw provides ample space for a full complement of large, evenly spaced, white teeth meeting in a scissors bite. The line of the incisors is straight and perpendicular to the outside lines of the jaw. Canines are large and long.

The nose is large, broad, and black, although a brown nose is acceptable in white and light fawn colored dogs.

The eyes are brown, of medium size, and oval-shaped. They are set slightly obliquely and deeply under the brow. The tight, dry eyelids are rimmed with black pigment.

Cropped or uncropped. Uncropped, the ears are high set, triangular-shaped, and hang tight to the head. The outer margin of the ear should not be located below the level of the eyes. The ears may be cropped in what is known as a “shepherd’s crop.” The ear flap is removed horizontally and bluntly, close to the head.

The neck is powerful and short, and is carried at an angle of 30 to 40 degrees to the line of the back. Throatiness should be discouraged.

Faults: Neck too long or too weak; dewlap.

The shoulder is moderately laid back, forming, with the upper arm, an angle of about 100 degrees.

Viewed from the front, the forelegs are straight, well-boned, and set parallel and well apart. The length of the front leg (measured from point of elbow to the ground) should be slightly more than one-half of the dog’s height (measured at the withers). The pasterns are short, strong, and, when viewed from the side, slightly sloping. Circumference of the pasterns ranges from 5½ to 6¾ inches in mature males and from 5 to 6 inches in mature females.

Serious Faults: Straight shoulders; crooked or fine forelegs; out at elbows; down at pasterns.

The proportion of the length of body vs. the height at the withers is 100:108. The ribs are well sprung and let down to, or slightly below, the elbows. The chest is broad and deep. The line of the back inclines very slightly downward from broad, muscular, prominent withers to a strong, broad back with a straight upper line. The loin is short, broad, and slightly arched. The croup is broad, long, muscular, and nearly flat. Tuck-up is moderate. The skin is thick and elastic.

The rear legs are well-boned and moderately angulated at stifle and hock joints. The hocks are strong, broad, and well let down. Viewed from the rear, the rear pasterns are parallel to each other. From the side, they are perpendicular to the ground. When standing normally, the rear legs are spaced moderately apart and positioned so that a line dropped from the point of buttocks to the ground would fall through the center of the point of hock and the rear pastern.

Faults: Hocks turned inward or outward; legs set too closely together or too far apart.
Serious Faults: Overangulated stifles or hocks; rear legs extended too far behind the dog.

Big, oval, compact and tight. Rear dewclaws, if any, are removed. Front dewclaws may not be removed. Toenails may be light or dark.

The Caucasian Ovcharka has a double coat consisting of longer, coarse outer guard hairs and dense undercoat made up of soft, fine hair. Coat on the muzzle, forehead, and the front of the legs is short and smooth. Longer coat on the cheeks and the backskull stands away from the body and contributes to the bear-like appearance of this breed. Three types of coat lengths are accepted without preference:
Long coat. The hair of the outer coat is very long, forming a “mane.” Extensive feathering on the hind legs gives the appearance of long, silky “pants.” The long hairs feathering the tail on all sides makes it look thick and fluffy.

The outer coat is still fairly long, but the mane, pants and tail feathering are less than with the long-coated type.

The outer coat is shorter and the mane, pants and tail feathering are absent. This is the least common type of coat.

The undercoat is light colored. The head often has a distinctive dark mask.

Disqualifications: Solid black (defined as black to the skin with no shading, such as in the Newfoundland). Black and Tan (defined as black and tan like the Rottweiler). Solid chocolate (defined as any shade of solid brown without lighter undercoat or sable overlay, like a Grizzly bear).

Minimum height at maturity, measured at the withers, is 25½ inches for males and 24½ inches for females. Dogs over 27¼ inches and bitches over 25½ inches are preferred. Weight should be in proportion to the height, giving a balanced, imposing appearance.

At the trot, the Caucasian moves freely with strides of moderate length, usually unhurried. The back remains level, and the front and rear legs on each side move in a parallel fashion. The front and rear pasterns flex freely. The back and loin are elastic and springy. As speed increases, however, the width between the legs decreases and the tendency to single track increases until the dog breaks into a heavy, lumbering gallop.

Faults: Elevated croup when moving; excessive up and down motion of the topline; pacing

(A dog with a Disqualification must not be considered for placement in a conformation event, and must be reported to UKC.)
Unilateral or bilateral cryptorchid.
Extreme viciousness or shyness.
Missing teeth other than a single premolar; overshot bite or undershot bite; wry mouth.
Solid black (defined as black to the skin with no shading, such as in the Newfoundland).
Black and Tan (defined as black and tan like the Rottweiler).
Solid chocolate (defined as any shade of solid brown without lighter undercoat or sable overlay, like a Grizzly bear).
Albinism.

Note: Caucasian Ovcharka are not to be penalized for mild dog aggression as it is a normal characteristic of this breed. Handlers, however, may be penalized for failure to properly control their dogs. 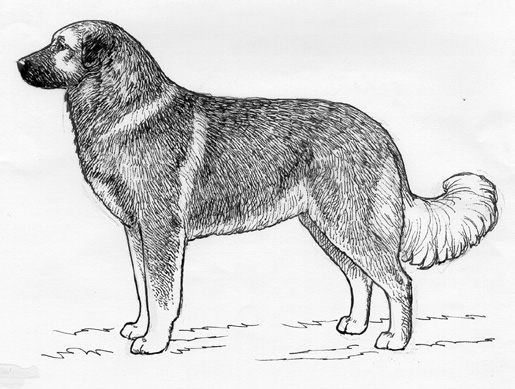