Any departure from the following should be considered a fault, and the seriousness with which the fault should be regarded should be in exact proportion to its degree and its effect upon the health and welfare of the dog and upon the dog’s ability to perform its traditional work, and/or survive in the free-ranging state.

When the first primitive humans crossed the Bering land bridge into North America from Asia, they were accompanied by a primitive form of dogs that resulted from the domestication of southwest Asian wolves in the region of Iraq a few thousand years earlier.

These small, nondescript dogs moved quickly with their human companions down through the western part of North America. Skeletal remains and mummified bodies of these dogs have been found along with the artifacts of the Basket Maker culture of the primitive Southwest Indians. From here, these primitive dogs moved into South and Central America and the eastern United States. Archeological investigations have documented ceremonial burials of these dogs, indicating their presence as companions of the Native Americans of the southeastern forested woodlands of that region, long before the arrival of Europeans on this continent.

Recently, studies of the free-ranging dogs of certain regions of a number of states from the Southeast through the desert Southwest have disclosed the continuing existence of small primitive dogs, whose appearance, as well as behavior and general ecology, suggest a close ancestry with, and possible descent from those first primitive dogs.

Called the “Carolina Dog,” these animals most closely resemble the Dingo of Australia, which may indeed be among their closest living relatives. The striking resemblance between these dogs and the Dingo, half a world apart, is likely due to the way in which both animals have filled a free-living, or “pariah” niche on the fringe of human civilization and culture.

The Carolina Dog was recognized by the United Kennel Club on January 1, 1995.

The Carolina Dog is a dog of medium build, possessing the general appearance of a small jackal or wolf in combination with many features of a small Sighthound. The distinctive features of the breed are those that confer survival advantages under free-living conditions in the tall grassland savannah and bottomland swamp forest habitats of the South, southeastern, and Southwestern United States. The dog typically has a medium-length straight back, with a distinctive waist which sets off a deep brisket from a highly tucked-up loin. The tail is distinctive in both its fish-hook-like configuration and its variable carriage, depending on mood.

The medium to large, usually upright ears and long, graceful neck are also distinctive and suggest the appearance of a small, versatile and resourceful predator, well adapted to surviving on its own in a natural habitat. In ideal conditions, a Carolina Dog should appear thin and tight. It is not inappropriate, for example, for the ribs to show slightly as in a well-conditioned racing sighthound. Individuals that are greatly overweight should be severely penalized. The dog is to be shown in a natural condition, with little or no evidence of grooming or scissoring. Whiskers are not to be removed.

A generally shy and suspicious nature is characteristic, but excessive fear and any resistance to examination is not desirable. No individual should be expected to be friendly and outgoing, or to enjoy physical contact with strangers.

Viewed from above, the head forms a wide triangle, with the tapering of the muzzle accentuated by the highly-developed jaw muscles. The skull tapers to a strong, pointed muzzle. The stop is slight, but distinct. Younger dogs often show fine wrinkling on the forehead, giving a frown effect.

The skull is strong and impressive. It is broad between the ears and moderately rounded, and has ample muscle. There is usually a distinct furrow extending down between the eyes. The forehead is slightly rounded. There is a prominent occiput.

The length of the muzzle is approximately equal to the length of the cranial portion of the skull. The jaws are powerful, clean and deep. The tight-fitting lips are black.

A full complement of white, well-developed, even teeth meet in a scissors or level bite.

The tongue may be fully pink, blue-black spotted, or fully black.

The almond-shaped eyes are usually brown in color, but can range in color to yelp, and occasionally blue. They are set obliquely. Eye rims are black and unbroken. Overall expression is one of softness and intelligence, but highly cautious.

The nose is black and has large, well opened nostrils.

The ears are mobile and expressive. They are slightly rounded at the tip, and fine in texture. The ideal ear is shaped like an equilateral triangle, although the base may be slightly shorter than the ascending edges. They are usually carried erect when the dog is alert, but can be folded and carried back along the neck. The ears are set well on top of the head, slightly pointing forward. Ear placement is more important than size, but it is essential that they be forward-pointed and set on top of the head.

A characteristic position is for one ear to be firmly pricked, and the other to rotate sensitively to pick up sounds.

Semi-prick ears and drop ears are permitted, but are to be penalized according to the degree of deviation from a full, upright configuration.

The neck is notable in its strength and development. It is strongly crested, fitting well into the shoulders, thus accentuating the crest to give the head a lofty carriage. The neck is graceful and swanlike, yet muscular and well arched, providing the animal with a means of making rapid and effective downward stabbing movements with the head when hunting in tall grass.

The long shoulders are laid back.

The forelegs are straight. The forearms have good length, moderate bone and strong musculature. The moderately straight, flexible pasterns are of good length.

The chest is narrow to medium in width and is deep, with plenty of lung and heart room. The brisket reaches to the elbows in mature specimens. There is a definite waist with a well-defined tuck-up.

The back is strong and straight. It may be moderately long, but must have no suggestion of slackness. There is a slight rise over the loin.

The thighs are thick, strong and well muscled, almost as in a well-conditioned racing sighthound. Rear dewclaws may be present.

While standing, the forefeet may be slightly turned out, but equally so. The moderately small feet are compact, never splayed. The toes are well arched. The pads are hard. The nails are strong.

Like the ears, the tail is a most expressive and characteristic feature of this breed. It is set on as a continuation of the spine. It usually has a moderate brush, but is most heavily haired on the underside, which is usually light colored or at least paler than the upper surface, which may show some dark sabling.

When the dog is alert, the tail is held in a characteristic "fish hook" carriage, usually at about a 45-degree angle from the horizontal. When the dog is gaiting at a trot, the tail is usually carried in a downward "pump handle" configuration. At other times, especially when the dog is being approached by a stranger, the tail may be held low or tucked between the rear legs, but it must never be slack or loose in its hang.

Serious Faults: Any tail which twists, makes a full curl, or is held unduly forward over the back.

The characteristics are affected by the seasons. The winter coat is distinctly heavier than the summer coat. In the cooler months, there should be a wealth of undercoat. Animals showing excessive shedding at appropriate times of the year are not to be penalized.

On the head, the ears, and front legs, the hair is usually short and smooth. Coarse, longer guard hairs (longer than the undercoat) extend over the neck, withers and back. When aroused, this hair stands erect. The coat behind the shoulder blades is often lighter in color in ginger-colored dogs.

The skin is pliant, but not flabby or loose.

The most common color is various shades of red ginger with pale buff markings over the shoulders, and pale white along the muzzle.

The preferred and acceptable colors usually include lighter shadings on the underside, chest and throat, sometimes being nearly white on the throat. Some white on the toes is common and not to be penalized. Dark sabling over the back, loins and tail is permissible. Dogs less than two years of age have darker muzzles, but this is not required.

The following color patterns are permitted, and are equally desirable: black and tan, also piebald spotted and black blanket back, and all black, often with minor markings.

The average height measured at the withers, generally ranges from 17¾ to 19 5/8 inches (45 to 50 cm), but can vary according to build. Type and symmetry are more important than size.

Weight is dependent on the overall size and build of the individual, and varies from approximately 30 to 44 pounds (15 to 20 kg).

Females are generally lighter in build than dogs, but the sexes overlap broadly in both size and weight. At no time should the breed appear heavy bodied.

Gait is low, free moving, effortless and smooth. There is a suggestion of flexibility in the back, as would be expected for a small sighthound capable of a double suspension gallop.

Serious Faults: High, choppy, or hackneyed gaits. Toeing in. Toeing out. Moving too close behind.

(A dog with a Disqualification must not be considered for placement in a conformation event, and must be reported to UKC.)
Unilateral or bilateral cryptorchid.
Viciousness or extreme shyness.
Solid white coat color.
Albinism. 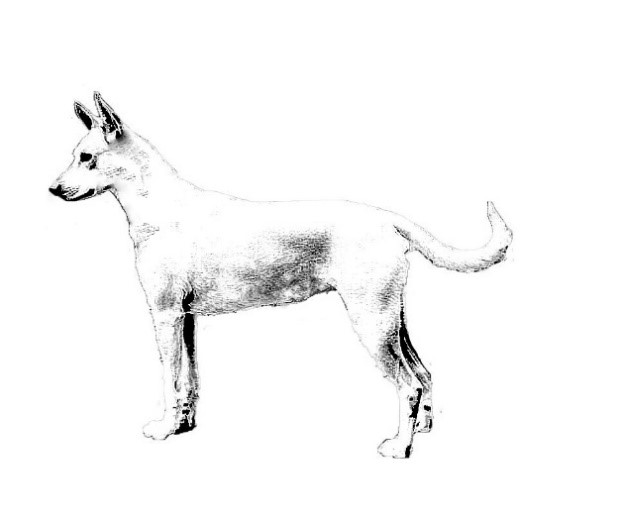