The Cardigan is one of two Welsh Corgi breeds, the other being the Pembroke. Several theories exist regarding the origin of these very old breeds, one being that they were brought to Wales by the Celts. Another theory is that they are descended from the Swedish Vallhunds, which were crossed with the local Welsh herding dogs. The Cardigan is a herding dog, originally used to drive cattle to pasture.

The Cardigan Welsh Corgi was recognized by the United Kennel Club in 1959.

The general impression of a Cardigan Welsh Corgi is that of an intelligent, handsome, powerful, sturdily-built, small dog that is long in proportion to his height. He has a fox-like brush that is carried in line with his body.

Cardigans are even tempered, loyal, affectionate and adaptable. They are alert and watchful, yet friendly.

The head is foxy in shape and appearance, with ears that are rather large in proportion to the size of the dog.

Wide and flat between the ears, tapering in width towards the eyes. It is slightly rounded above the eyes. There is a moderate stop.

A full complement of strong, regular, white teeth meet in a scissors bite, with the inner side of the upper incisors fitting closely over the outer side of the lower incisors.

The medium size eyes are wide set and have distinct corners and dark rims. Eye color is clear and dark, in harmony with the coat color. Blue eyes (which includes partially blue eyes and one dark and one blue eye), are permissible only in blue merles.

The nose is black. In blue merles, a butterfly nose is tolerated, with a black nose being preferred.

Disqualification: Nose color other than black, except for a butterfly nose on a blue merle dog.

The large, prominent ears are slightly rounded at the tip, wide at the base and have good strong leather. They are carried erect, sloping slightly forward when alert. When the ears are erect, the tips are slightly wide of a straight line drawn from the tip of the nose through the center of the eye. The ears are set well back so that they can be laid flat against the neck.

The long, well-laid-back scapula (shoulder blade) meets the humerus (upper arm) at an approximate right angle, the humerus and scapula being nearly the same length. The elbows are held close to the body.

The front legs are short, but keep the body clear of the ground. They are heavy in bone. The forearms are slightly bowed so that they mold around the chest. The feet turn out slightly.

The moderately broad chest has a prominent breastbone and a deep brisket that is well let down between the forelegs. The well-sprung ribs extend well back. The topline is level. The loin is strong and short. The croup is slightly sloped downward to where it meets the base of the tail. There is a moderate tuck-up, with a well-defined waist.

Strong and well angulated, with muscular thighs and second thighs.

Short, with strong bone all the way down to the feet. When standing, the rear pasterns are parallel to one another viewed from the rear, and perpendicular to the ground when viewed from the side.

Round and tight, rather large. Well padded.

The long, fox-like tail is low set and reached to the ground, or nearly so. It is carried low when the dog is standing, and may be lifted a little above the body when the dog is moving. Never carried curled over the back.

Serious Fault: High tail set. Tail curled over the back.

Short or medium in length, with hard texture of outer coat and good undercoat. The coat should be weather proof. A straight coat is preferred. The correct coat forms a slight ruff around the neck, pants on the back of the hind legs, and brush on the tail.

The Cardigan Welsh Corgi is shown in natural condition. No trimming is permitted except to tidy the feet and, if desired, to remove the whiskers.

Acceptable coat colors include: all shades of red, sable and brindle; black, with or without tan or brindle points; and blue merle (black and gray marbled), with or without tan or brindle points. No one color is preferred over any of the others. White markings may found on the legs, chest, neck (either in or as part of a collar), muzzle, underparts, as a blaze on the face, and on the tip of the tail, but white should not predominate.

Overall balance is more important than absolute sizes. When standing naturally, dogs and bitches range from 10½ to 12½ inches, measured at the withers. The ideal length to height ratio is 1.8:1 when measuring from the breastbone to the buttocks and the withers to the ground. The ideal weight range for dogs in working condition is from 30 to 38 pounds; for bitches is from 25 to 34 pounds.

Free, smooth, effortless movement is of utmost importance. When viewed from the side, at a trot, the forelegs reach well forward without too much lift. The hind legs reach well under the body, moving in line with the forelegs, in one continuous motion. They drive powerfully behind, well beyond the set of the tail. The hocks turn neither in nor out.

When viewed from the front, the legs do not move in exact parallel planes; they incline slightly inward to compensate for the characteristic shortness of the legs and chest width. The feet travel parallel to the line of motion with no tendency to swing out, cross over or interfere.
Serious Faults: Short, choppy movement. Rolling or high stepping gait. Close, or overly wide coming or going. 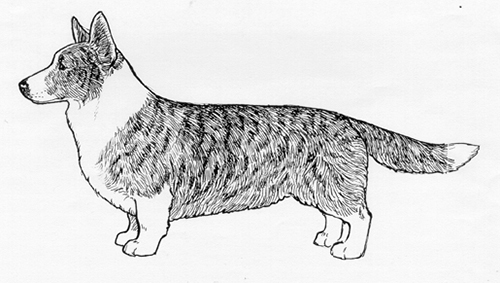