Named for a small village in the mountains of Portugal, the Cao De Castro Laboreiro is an ancient breed of the Iberian Peninsula. The breed is common only in a limited range at variable altitudes in the northern part of the country.

The Cao De Castro Laboreiro was recognized by the United Kennel Club in 2006.

A strongly built, mastiff type dog, rectangular in proportion, with a pleasant appearance and, quite often, a striking coat. He has a noble carriage and is very hardy.

The Cao De Castro Laboreiro is a loyal and obedient herd guardian. He is still used to defend against wolves that frequent his homeland. He is sometimes hostile, but not aggressive, though he has a severe expression.

Slightly long, rectangular in shape, light rather than coarse, and free of wrinkles.

Rather broad, flat on top and arched at the sides, with slight frontal furrow and no prominence of occiput. The amount of stop is slight.

Long, strong, and tapering in width from eyes to nose, but never pointed. Length of the foreface is slightly less than the length of the skull. The lips are clean and close-fitting, never pendulous. Mucous membranes, hard palate and edges of lips are all strongly pigmented in black.

The Cao De Castro Laboreiro has a complete set of evenly-spaced, white teeth meeting in a scissors bite.

Medium size, almond-shaped, and obliquely set. Varying shades of brown, from hazel to nearly black. The expression is severe and hard.

Medium size, triangular in shape, with rounded tips. Set fairly high, the ears hang naturally close and flat to the head. When the dog is attentive, the ears turn forward.

Long and straight, with well-developed bone and muscle. Pasterns are short and slightly sloping.

The chest is fairly deep and oval in shape. The back is straight. The loin is short, strong and well muscled. The croup is gently sloping. There is a distinct tuck-up.

Extremely muscular, the upper thighs have distinct muscle masses that are evident when viewed from behind.

There is moderate angulation of the stifle and hock. The rear pasterns slope a little forward when viewed from the side.

Rather round, with large, arched toes and thick pads. Single or double dewclaws are acceptable.

Set fairly high, thick at the base, reaching to the hock joint. Saber shaped and well furnished on the underside. When the dog is excited, the tail is carried above the topline but never curled over the back.

Short, thick, coarse and weather resistant, the coat is shorter and finer on the head and ears and on the front of the legs. It is thicker and longer on the underside of the tail and the thighs. There is no undercoat.

Wolf colors in all shades from very light through medium to very dark, sometimes all occurring on the same dog. Most preferred is a coat of mixed shades of grey interspersed with brown or reddish hairs on parts or all of the body.

Faults: White markings or any color other than breed typical.

Faults: Deviations over or under the average heights.

The Cao De Castro Laboreiro has an easy, rhythmical gait, moving with the legs parallel to the median plane of the body. The dog normally moves at a walk or an amble. 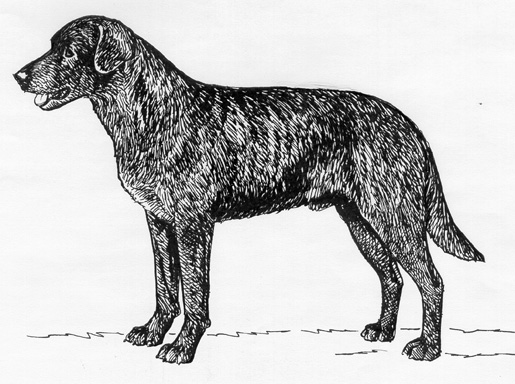