The Canadian Eskimo Dog is an aboriginal breed of dog that has a long and unique history of being interdependent with the Inuit people of the Arctic. As a primitive dog, it is primarily carnivorous, with a natural diet that consisted of seal, walrus, fish and caribou. For centuries, they were used as a draught, pack and hunting animal.

The Canadian Eskimo Dog was recognized by the United Kennel Club January 1, 1996.

The Canadian Eskimo Dog is a powerfully built, spitz type dog of medium size with a thick neck and chest and medium length legs. He has a majestic and powerful build that gives the impression that he was built for hard work rather than for speed. During the winter the breed is thickly clothed with a dense, double coat that allows them to easily withstand the rigors of the high Arctic. Females have a shorter coat and are significantly smaller than the males.

The temperament of the breed should reflect the hard working animal that it is. In general disposition, the mature Canadian Eskimo Dog is usually gentle and affectionate, exhibiting quiet friendliness or harmless curiosity, or being somewhat distant. They are very pack oriented, and if raised as a group the pack structure will be well controlled by dominant individuals. Compared to modern domestic breeds, the Canadian Eskimo Dog seems to be over stimulated by things such as food, work, fighting or play, and for this reason they should be the companions of adults, not a child’s pet.

The head is wolf-like, but more elevated in the forehead than the wolf. Immature females will have a much narrower skull than the males.

The muzzle is tapered and of medium length. The jaws are heavy and powerful. The lips are black or brown with pink.

The Canadian Eskimo Dog has a complete set of evenly spaced, white teeth meeting in a scissors bite.

Color of the nose ranges from black to light brown. Butterfly noses are occasionally seen.

The eyes are small, widely spaced and obliquely placed, giving the dog a rather wild appearance. They are generally dark colored, but hazel or yellow eyes do appear.

The erect ears are short, thick and slightly rounded at the tips. They are covered with dense, short hair.

Disqualification: Ears that are not erect. This is not to be confused with ears that are battle torn.

The shoulders are broad, obliquely set, and moderately muscled.

The forelegs are straight, but they may give the impression of being bowed due to the well developed triceps muscle above and behind the elbow and the pronounced muscle of the forearm itself.

The body of the Canadian Eskimo Dog gives the impression of great strength and endurance, from a deep, wide and well muscled chest to a well developed loin. There is very little tuck-up at the flank. The spinal column, when felt through the heavy coat, is well pronounced. Above all, the body should be muscular, not fat. Females will have a smaller body than the males.

The hips may appear as pronounced and bony as the spine. The hip bones are about the same height as the withers.

The legs are very muscular, with the width of the thigh being carried well down towards the hock. The stifles are well bent. From the rear, the legs will appear straight, with the hocks turning neither in nor out.

The feet are large and nearly round, with well arched toes and thick pads that have thick fur between them. During harsh winter conditions, the fur will grow long enough to completely cover the bottom of the pads.

The tail is large and bushy, and usually carried up or curled over the back. Mature females may on occasion carry their tails down.

Disqualification: No evidence of a curled or upright tail in male dogs. (Recognizing that a tail may occasionally be held down due to subordination or stress.)

The coat is thick and dense, with a harsh, stiff outer coat that varies in length from 3 to 6 inches. Males grow a mane over the neck and shoulders which makes them appear taller than they actually are. Females usually have a shorter coat overall. The undercoat is very dense. The coat is subject to an annual molt, usually in August or September.

Disqualification: Any clipping, scissoring or altering of coat.

The following colors and patterns are all equally acceptable:
Solid white.
White with red, buff, cinnamon, grey or black markings around the ears or eyes and/or in small patches on the body.
Parti-color, with white and either red, buff, cinnamon, grey or black in even 50-50 distribution.
Red, buff or cinnamon with white on the chest and/or legs and underbelly.
Sable, black or dark grey with white markings on legs, chest, underbelly or collar.
Silver grey or grayish white.
Buff or brown undercoat with black guard hairs.
Dogs with mostly colored heads commonly have a mask-like shading of white around the eyes and/or muzzle, with or without white spots over the eyes. Occasionally tri-color markings appear on an otherwise two colored dog.

The working gait is a powerful and brisk trot, with the rear legs moving in a line with the front legs, but showing some abduction, particularly in mature males that have done many miles in harness. The abduction is due to a wide stance caused by well developed thighs. It is an efficient gait for heavy pulling day after day. Females are faster and freer in movement than males. Movement should never appear choppy or paddling.

(A dog with a Disqualification must not be considered for placement in a conformation event, and must be reported to UKC.)
Unilateral or bilateral cryptorchid.
Viciousness or extreme shyness.
Excessively undershot or overshot jaw.
Blue eyes.
Ears that are not erect. This is not to be confused with ears that are battle torn.
Dewclaws on rear legs.
No evidence of a curled or upright tail in male dogs. (Recognizing that a tail may occasionally be held down due to subordination or stress.)
Any clipping, scissoring or altering of coat.
Albinism. 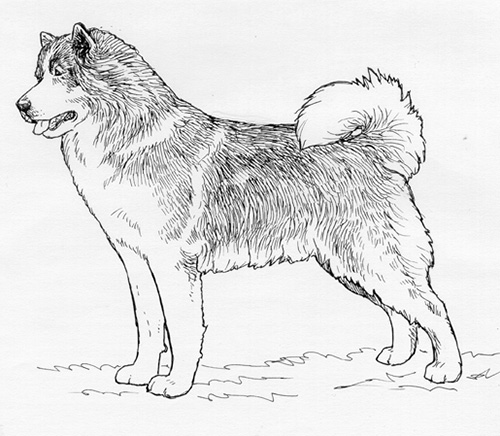