The Canaan Dog is an ancient breed resembling the wild dog type which has survived in Israel through at least 4000 years of history. Canaan Dogs are pariah dogs which live on the fringes of civilization and are frequently used by the Bedouin as flock and camp guardians. In 1934, Dr. Rudolf and Prof. Rudolphina Menzel immigrated to Israel, then known as Palestine. They undertook the study of pariah dogs and the Canaan Dog in particular, becoming the driving force behind its preservation. Prof. Menzel bred and trained Canaan Dogs, primarily for military work. In 1965, Prof. Menzel exported four Canaan Dogs to the United States where they became the foundation stock for American and Canadian Canaan Dogs.

The Canaan Dog was recognized by the United Kennel Club in 1992.

The Canaan Dog is a medium-sized, well-balanced, strong and square dog, with a wedge-shaped head; erect, low-set ears; and straight, harsh, dense coat of short-to-medium length. The correct relationship of height to length of body is 1:1. The tail is bushy, set on high, and is carried curled over the back when the dog is alert or excited. This breed is presented in a completely natural condition with no trimming. Moderation and balance must always be considered when evaluating this breed.

The essential characteristics of the Canaan Dog are those which have enabled them to survive for centuries in the desert. The Canaan Dog gives the impression of elegance but is sufficiently substantial to stand up to jackals, hyenas, and wolves. They are intelligent and adaptable to wide extremes of lifestyle and climate. The character of the Canaan Dog is based on their instinct for survival and sense of territoriality. They are extremely vigilant and alert; quick to react; distrustful of strangers, both human and animal; and strongly defensive but not naturally aggressive. Their first reaction, when confronted with an intruder is not to attack but to stay out of reach and bark continuously. Canaans of both sexes may be aggressive with other dogs, particularly in their own territory. Canaan Dogs are extraordinarily devoted and amenable to training but consider themselves the equal of those with whom they live. Canaans raised with children are very gentle with and extremely protective of them. This breed matures slowly both physically and mentally and individual dogs may not reach their prime until as late as four years of age.

The head is a well-proportioned, wedge shape that is moderately broad between the ears and tapers evenly toward the muzzle. Head length is approximately twice the width of the skull. Males should look powerfully masculine without coarseness and bitches should look feminine without over-refinement. From the front, the sides of the wedge taper evenly from the ears to a full muzzle, without prominent cheeks or a pinched muzzle. When viewed from the side, the skull and muzzle are parallel to one another and joined by a shallow but definite stop.

The skull is moderately broad between the ears and tapers toward the muzzle. At its broadest point, the width of the skull should be approximately equal to its length. The low set of the ears makes the skull appear broader than it is. A disproportionately narrow skull is to be penalized. Viewed from the side, the topline of the skull is slightly flattened.

The Canaan Dog has a complete set of good-size, evenly spaced, white teeth meeting in a scissors or level bite.

The nose is solid black. In some light-colored dogs, the pigment of the nose may fade somewhat during the winter months. This is not desirable but should not be severely penalized. In profile, the nose is on the same line as the top of the muzzle and extends somewhat beyond the lower jaw.

The eyes are of medium size, almond-shaped, and set slightly obliquely. Dark brown eyes are strongly preferred. Lighter eyes are less desirable and the lighter the eye, the more serious the fault. Hazel or yellow eyes are serious faults. Dark eye rims are essential.

The ears are relatively short and broad, prick, and set low. The ears are slightly rounded at the tips and point slightly outward although they can be drawn nearly upright when the dog is alert. The ears are mobile and react sensitively to sounds. Ears should be fully erect by the time a dog is one year of age.

The neck is very muscular and long enough to give a balanced, elegant appearance.

The shoulders are moderately laid back and muscular. The scapula and the upper arm form an angle of about 110 degrees. When standing, a line dropped from the highest point of the withers would pass just behind the forelegs. The muscles of the upper leg are firm and well developed. The forelegs are straight, with strong, moderately short, very slightly sloping pasterns, and moderate bone. The shoulder blade and the upper arm are roughly equal in length. The upper arm lies close to the ribs but is still very mobile, with the elbow moving close to the body.

The Canaan Dog is a square dog. His height, measured from the withers to the ground, should equal his length of body, measured from point of shoulder to point of buttocks. The topline inclines very slightly downward from well-developed withers to a level back. A sloping topline must be faulted. The back is well-muscled, with a short, strong loin. The ribs are well sprung out from the spine. The chest is deep and moderately broad. When viewed from the side, the lowest point of the chest is immediately behind the foreleg. The forechest should extend in a shallow oval shape in front of the forelegs. The belly is well tucked up. The croup is short and relatively level.

The hindquarters are powerful with very muscular and moderately broad thighs. The rear legs are moderately angulated. The hocks are well let down and perpendicular to the ground when viewed from any angle. Viewed from the rear, the hocks should be parallel to each other.

The feet are of medium size, strong, round and cat like, with hard pads. Nails are strong and hard. Dewclaws may be removed.

The tail is a thick brush set on high. When the dog is alert or excited, the tail is carried in a loose curl over the back.

The Canaan Dog has a double coat. The outer coat consists of straight, dense, harsh-textured short-to-medium length hair. The undercoat is close-fitting, dense, profuse, and downy in texture. The neck is well-furnished with hair, which forms a protective ruff blending into the apron. The buttocks are lightly feathered and the tail is well furred. Correct coat is essential to survival in the desert so an incorrect coat, including the absence of undercoat, is a serious fault.

Desirable height ranges from 20 to 24 inches, measured at the withers. Desirable weight ranges from 40 to 55 pounds. Dogs are distinctively masculine in appearance compared to bitches and may be considerably larger.

The natural gait of the Canaan Dog is an effortless, ground-eating trot. It is a short, quick, agile gait which enables the Canaan to change direction instantly, leap effortlessly, or just trot for hours without tiring. Correct movement is essential in this breed.

The Canaan Dog has survived for thousands of years in the desert. Any deviation from the standard which compromises that ability should be penalized in proportion to the degree of the deviation.

(A dog with a Disqualification must not be considered for placement in a conformation event, and must be reported to UKC.)
Unilateral or bilateral cryptorchid.
Viciousness or extreme shyness.
Wariness has great survival value so Canaans often back off slightly when approached by a stranger. This aspect of Canaan temperament should not be penalized. However, dogs displaying extreme shyness, panic, or fear-biting should be disqualified. There is no place for this in domestic stock.
Albinism. 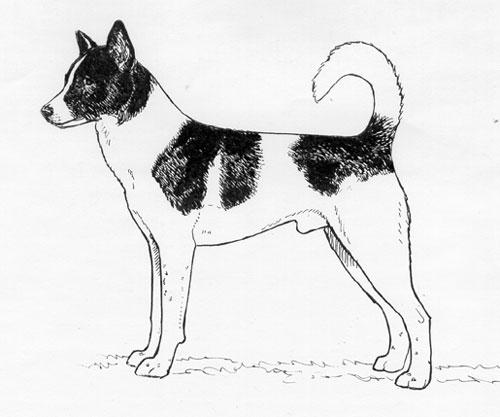 For more information on this breed, please visit the Israel Canaan Dog Club of America, Inc.