The Cairn Terrier was developed in Scotland to hunt otter, fox and other vermin along the shoreline. The Scottish, West Highland White and Cairn terriers were developed from the same stock, first called Scotch terriers and later Skye terriers. The three were often found in the same litter, distinguished only by color.

The Cairn first competed for challenge certificates in England in 1912.

The Cairn Terrier was recognized by the United Kennel Club in 1959.

A small working terrier, agile and alert, with a shaggy, weather resistant coat and a natural appearance.

Active and game, with a fearless, gay but not aggressive disposition.

The head is shorter and wider than on any of the other terriers, and well furnished with hair, giving the dog a somewhat foxy expression.

Is broad in proportion to its length and there is a decided stop.

Powerful, with strong jaws, but they are not long or heavy.

A full complement of strong, large, white teeth meet in a scissors bite.

Small and pointed, well carried and erect. Not too closely set nor heavily furnished.

Well set on, not short.

Medium length of leg with good, but not too heavy bone. Forelegs never out at the elbows. Legs perfectly straight, but feet may turn slightly out. Covered with harsh hair.

The back is level, of medium length, and ribs are well sprung and deep. Strong, supple loin.

Very strong and muscular thighs. Good, but not excessive bend of stifle. Hocks well let down, inclining neither in nor out when viewed from the rear.

Short, in balance with the head, well furnished with hair, but not feathery. Neither high nor low set, carried gaily, but not curled over back.

Very important. Weather resistant. Must be double coated with profuse, harsh, but not coarse, outer coat; undercoat short, soft and close. A slight wave is permissible. Open coats are objectionable. 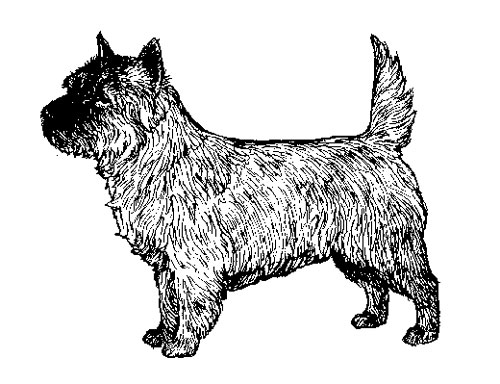