In its present form, this is a fairly new breed, developed about 1860. The purpose for the development of the breed (a 60% Mastiff, 40% Bulldog cross), was to stop poaching in the English estates. The landowners wanted the poachers thrown and held but not mauled. The Mastiff, while powerful and courageous, was not fast enough and sufficiently aggressive. The Bulldog was a little too ferocious and not large enough for the task. This cross resulted in the development of a breed that was totally utilitarian.

The Bullmastiff was recognized by the United Kennel Club in 1948.

The Bullmastiff is symmetrical in structure. The breed is powerfully built, showing great strength and endurance, and is active. It is alert and fearless, yet docile in manner. It may be red, fawn or brindle in color, with a natural tail and ears.

High spirited, alert and reliable, the Bullmastiff is a dependable family companion and protector.

The head is broad with well-developed cheeks and a fair amount of wrinkles showing when the dog is alert.

The skull is large and square; the circumference of the skull may be equal to the height of the dog at the shoulder. The stop is pronounced.

The muzzle is short, blunt and squared off. It is approximately one-third of the length of the entire head. The flews are not pendulous. A dark muzzle is preferred.

Serious Faults: Lack of foreface, with the nostrils set on top of the muzzle such as in the Bulldog.

A full complement of large, strong, white teeth meet in a level or slightly undershot bite. The canine teeth are large and set wide apart.

The nose is black. The nostrils are large and broad.

The eyes are dark and of medium size. They are set well apart, and there is a furrow between them.

The medium-sized, V-shaped ears are set wide and high on the skull, level with occiput and close to the cheeks, giving a squared-off appearance to the skull.

The slightly-arched, muscular neck is of moderate length; it has almost the same circumference as the skull.

The shoulders are muscular, sloping, and powerful, but not loaded.

The powerful, straight, well boned forelegs are set wide apart, showing a straight front. The pasterns are straight and strong.

In proportion, the Bullmastiff is just slightly longer, from the breastbone to the buttocks, than he is tall, resulting in a fairly square appearance. The chest is wide and deep, and well let down between the forelegs. The back is short and straight, giving a compact carriage. The loin is wide and has good depth.

Faults: Roached back; sway back.

The hind legs are strong and muscular, with a well-developed second thigh. When viewed from the rear, they are parallel. The hocks are moderately bent.

The feet are medium-sized, with well-arched, rounded toes. The pads are thick and tough. Dark toenails are desirable.

The tail is set high, and is carried straight or curved. It is strong at the root, and tapers, reaching to the hocks.

The coat is short and dense, and lies flat to the body, giving protection to the weather.

Any shade of brindle, fawn or red; to be pure and clean. A slight white marking on the chest is permissible. A dark muzzle is essential. The ears are darker than the body.

Free and powerful, indicating a sense of purpose. Legs do not cross or interfere and the back remains firm and level. 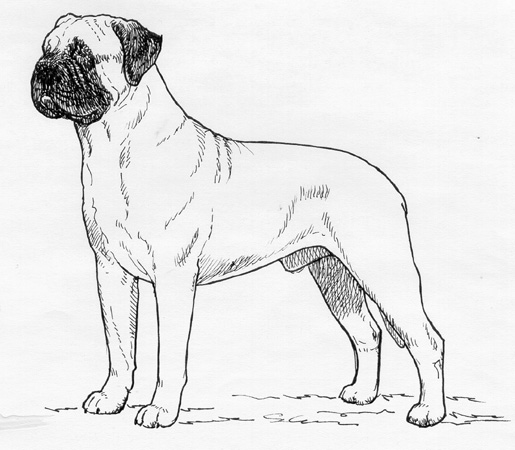