The goals and purposes of this breed standard include: to furnish guidelines for breeders who wish to maintain the quality of their breed and to improve it; to advance this breed to a state of similarity throughout the world; and to act as a guide for judges.
Breeders and judges have the responsibility to avoid any conditions or exaggerations that are detrimental to the health, welfare, essence and soundness of this breed, and must take the responsibility to see that these are not perpetuated.
Any departure from the following should be considered a fault, and the seriousness with which the fault should be regarded should be in exact proportion to its degree and its effect upon the health and welfare of the dog and on the dog’s ability to perform its traditional work.

The Brussels Griffon is a very old breed, being documented as far back as the 15th century in a painting by Jan Van Eyck, “The Marriage of Giovanni Arnolfini”. Developed in Belgium, it is thought that the breed's ancestors were German rat dogs. Initially used as stable “ratters,” the Brussels Griffon became popular as guardians of the horse-drawn cabs. It is thought that the original Brussels Griffon was crossed with the Pug, the Affenpinscher and the Ruby King Charles Spaniel in the early 19th century to produce the breed as we know it today. The breed found favor with the nobility, and this helped spread its popularity into England and other parts of the world.
The Brussels Griffon was recognized by the United Kennel Club in 1956.

The Brussels Griffon is small, robust, alert and intelligent. It is square, with a thickset body and an almost human expression. It comes in two coat types, rough and smooth, which are identical except for coat.
Disqualifications: Unilateral or bilateral cryptorchid.

Characteristics
This is an alert, watchful breed, very devoted to its owners. It is neither timid nor aggressive.
Disqualifications: Viciousness or extreme shyness.

An important component of breed type, the head is somewhat large in comparison to the size of the dog. In the rough coated dogs, the hair is upstanding and tousled, with furnishings above the eyes, on the foreface, cheeks and chin.
Absolute soundness and proper muscle tone is a must. Head properties should remain free of exaggeration so as to not compromise breathing and/or obstruct normal vision.

Relatively large and round, with a slightly domed forehead and a deep stop.

A full complement of strong, white teeth meet in an undershot bite. The incisors of the lower jaw protrude over the upper incisors and are straight and parallel.
Serious Fault: Wry mouth
Disqualification: Overshot jaw.

Relatively large in proportion to the skull, round and well set apart, but never bulging. They are very dark brown in color. The eyelids are edged in black.

The tip of the nose is set back between the eyes to form a lay-back. It is set on the same level as the eyes, and is black in color. Nostrils are wide open.
Disqualifications: Dudley nose. Butterfly nose.

The small ears are set rather high and, if cropped, are held erect. The ears may be cropped to a point, but this is not necessary. Natural, uncropped ears are carried semi-erect.

The gracefully arched neck is of medium length.

The straight, medium-length forelegs are well muscled, and have good bone. When viewed from the front they are set moderately wide apart and are straight from the point of the shoulder to the foot. The pasterns are short and strong. Dewclaws may be removed.

The brisket is broad and deep, and the breastbone is well-defined when viewed in profile. The ribs are well-sprung. The back is short and level, loin strong and slightly arched, croup flat or very slightly sloping. There is a slight tuck-up to well-defined flanks. The body is square, measured from point of shoulder to point of buttocks and top of withers to ground.

Angulation in balance with forequarters.

Strongly muscled with good bone. Straight and parallel from hip to foot when viewed from behind. There is sufficient angulation at the stifle and hock and the rear pasterns are short.

The feet are round, small and compact. They turn neither in nor out. The toes are well-arched. Black pads and black toenails are preferred.

Set and carried high. If docked, two-thirds is removed. If natural, the tail is carried upright with the tip towards the back, but never curled or touching the back.
Serious Faults: A naturally short, or curled tail.

Two distinct coat types: rough and smooth.
The rough coat is wiry, dense and double, long enough to be able to feel its harsh texture, but not so long as to obscure the outline of the dog. On the head, the hair forms a beard, moustache and eyebrows. A silky or wooly coat is a serious fault.
In the smooth coat, the hair is short, harsh, flat and gleaming.
There is no division by coat in conformation events; rough and smooth-coated dogs are shown together.

Acceptable coat colors, in both the rough- and smooth-coated dogs, include:
Reddish-brown; a little black at the whiskers and chin is allowed;
Black and reddish-brown mixed; commonly with a black mask and whiskers;
Black with uniform reddish-brown markings; commonly appearing under the chin, on the legs, over the eyebrows, around the edges of the ears and around the vent; and
Solid black.
Serious Faults: In either coat type, any white hairs (except for the natural “frost” found on the muzzle of mature dogs).
Disqualification: Albinism. Any color other than those described.

The Brussels Griffon ranges in weight from eight to ten pounds, and should not exceed twelve pounds.
Quality is not to be sacrificed in favor of size.

(A dog with a Disqualification must not be considered for placement in a conformation event, and must be reported to UKC.)
Unilateral or bilateral cryptorchid.
Viciousness or extreme shyness.
Albinism.
Dudley nose.
Butterfly nose.
A white spot or white blaze anywhere on the coat.
Tongue visible when the mouth is closed.
Overshot jaw.
Any color other than those described. 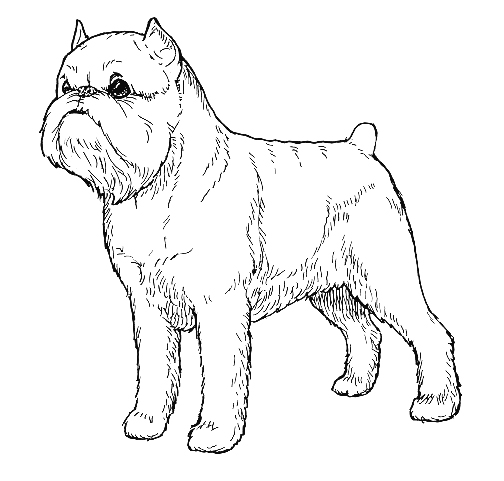