Any departure from the following should be considered a fault, and the seriousness with which the fault is to be regarded should be in exact proportion to its degree and its effect upon the health and welfare of the dog, and on the dog’s ability to perform its traditional work.

The Brittany originated in France and is the only pointing spaniel. Its name is derived from the French Province of Brittany. The first breed standard was written in France about 1907. The breed was introduced into America in the early 1930's.

It is to the credit of responsible and involved breeders that they have consistently maintained the versatility and multi-purpose characteristics of the breed. They have succeeded in not allowing the breed to be divided into two types, show versus working.

The Brittany was recognized by the United Kennel Club in 1948.

The Brittany is square and compact, and is rather leggy for a spaniel, with its height being the same as the length of body. They are quick in movement, strong, vigorous and energetic, rugged without being clumsy. The tail is customarily no more than four inches in length.

In temperament, the Brittany is friendly and eager to please. These friendly little dogs hunt more like a Setter due to their pointing ability, and are higher on their legs than other Spaniels. The Brittany does not require a heavy hand in training. In fact, they may quit if the discipline is too stern. Much more is accomplished with a gentle hand. They seek human attention, which makes them easier to train than some other hunting breeds. They make close working hunting dogs, fine companions, and family pets.

Rounded, of medium length, evenly made, and slightly wedge shaped.

Approximately two-thirds the length of the skull. It gradually tapers both horizontally and vertically. The lips are tight to the muzzle.

The eyes are well set into the head, and well protected from briars, etc., by heavy, expressive eyebrows. Darker colored eyes are preferred, but lighter shades of amber are not to be penalized.

In length, they reach approximately one-half the length of the muzzle. The short, triangular-shaped ears are set high on the head, above the level of the eyes. Ends of the ears are very slightly rounded. The ears are covered with dense, relatively short hair and have little fringe.

The slightly arched neck is of medium length and is free of throatiness. It is strong, but not overly muscled.

There is approximately two-fingers width between the top of the shoulder blades (at the withers). The shoulders have a 90-degree angle in the relationship of the blade and upper arm and to the point of the elbow nearest the ribs.

Viewed from the front, the front legs are perpendicular. Viewed from the side, the pasterns are slightly bent. Long bones are clean and graceful, but not too fine. Dewclaws may be removed.

The body is square. The length is approximately the same as the height, measured at the withers. The body length distance is measured from the point of the forechest (posternum) to the rear of the haunches (point of buttocks). The chest is deep, reaching to the level of the elbows. The ribs are well sprung. Adequate heart room is provided by depth and width. The back is short and straight. Topline is slightly sloped from the withers to the base of the tail. The loins are short, strong and firm. The flanks are fairly full, with a rounded, moderate tuck-up.

The hindquarters are strong and powerful, with broad, muscular thighs, and well bent stifles.

The ideal foot is halfway between a hare foot and a cat foot. The feet are small, strong and close-fitting, with well-arched toes and thick pads. Toes are not heavily feathered.

The tail is set high, as an extension of the spine. It is a natural bob or customarily docked to a length no longer than four inches.

The coat is wavy or flat, and dense. Feathering of moderate appearance is found on both the front and rear legs. The thighs are well feathered, but not profusely, halfway to the hock. The ears carry little fringe. The skin is fine and fairly loose.

Orange and white, liver and white, and black and white, in clear or roan patterns. Some ticking is desirable. Tri-colors are allowed but not desirable.

Height - 17½ to 20½ inches, measured at the withers. The Brittany’s preferred weight is from 30 to 45 pounds. Quality is not to be sacrificed in favor of size.

Eliminating Faults: Dogs measuring under 17½ inches or over 20½ inches.

Gait is always smooth, with powerful drive from the hindquarters. As speed increases, the dog single tracks. The Brittany is a hunting dog, and movement must convey that of a well-balanced, strongly-built, agile, athletic dog capable of great stamina in the field.

(An Eliminating Fault is a Fault serious enough that it eliminates the dog from obtaining any awards in a conformation event.)
Dogs measuring under 17½ inches or over 20½ inches. 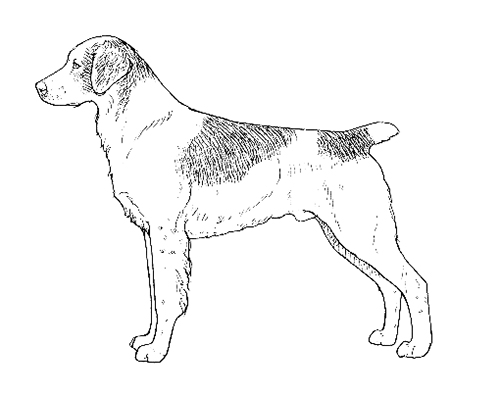