Briquet means “medium sized dog” in French, and this is the only breed to retain that name. The Briquet Griffon Vendeen was bred down in size from the Grand Griffon Vendeen, beginning before the First World War. They are used as pack animals on roe deer, wild boar and also on small game.

The Briquet Griffon Vendeen was recognized by the United Kennel Club January 1, 1996.

A Griffon of medium size, well proportioned, and somewhat stocky.

The Briquet is a headstrong, robust breed that hunts with stamina and enthusiasm. It is a passionate hunter, and not quick to obey.

The head is quite light. The toplines of the skull and muzzle should lie in parallel planes.

The skull is rather narrow, not too long, and slightly domed on top. The stop is well defined.

The muzzle is the same length as the skull, and not too broad at the tip. The nasal bone is straight. The lips cover the lower jaw but are not pendulous.

The Briquet Griffon Vendeen has a complete set of evenly spaced, white teeth meeting in a scissors bite.

Large and black, except in the orange and white dogs, where a brown nose is acceptable.

Large and dark, with a lively expression. The eyerims are tight and fully pigmented.

Set low, supple, narrow and fine, rolling inward, and not long enough to reach to the nose.

Long and elegant, with no dewlap.

Strong, but not heavy, with long, clean, sloping shoulders.

The legs are straight and strong. The elbows set close to the body, and the pasterns are strong.

The chest is quite deep, but not too wide. The ribs are moderately rounded. The back is short and solid, either level or rising slightly towards the hindquarters. The loin is straight, muscular and short coupled, and the croup is flat. The flanks are full, and there is little tuck up.

Well developed, with legs that are vertical and parallel.

The upper thigh is long and muscular. The hocks are moderately bent.

Set high, thick at the base, and tapering towards the tip. Carried up in saber fashion, but never curled over the back.

Fairly long, but not exaggerated, the outer coat is harsh and sometimes bushy. There is good undercoat. The eyebrows are well pronounced, but should not cover the eye. The muzzle is covered with a mustache. The skin is rather thick.

White and black, white and orange, black and tan, tricolor or fawn of any shade with black overlay, with or without white markings.

Disqualifications: Color that is solid white or solid black, without markings.

(An Eliminating Fault is a Fault serious enough that it eliminates the dog from obtaining any awards in a conformation event.)
More than one half inch over or under the allowable size.

(A dog with a Disqualification must not be considered for placement in a conformation event, and must be reported to UKC.)
Unilateral or bilateral cryptorchid.
Viciousness or extreme shyness.
Albinism.
Undershot or overshot bite.
Wall eyes.
Color that is solid white or solid black, without markings. 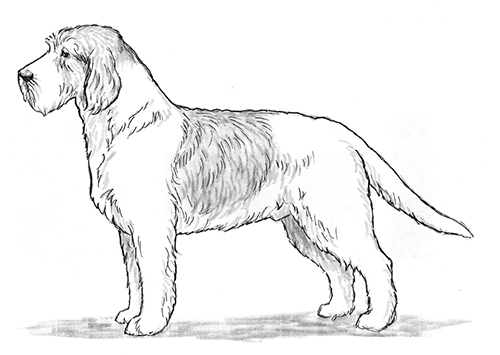