A French pointing breed that was created around 1830 by crossing an English Pointer with a Continental Pointer. The breed was in great vogue until the beginning of the 20th Century; being the most shown pointing breed in the first French dog shows.

The Braque Saint Germain was recognized by the United Kennel Club in 2006.

Sociable and easy to train, the Braque Saint Germain is an excellent hunter, with a soft mouth.

The skull is slightly rounded, with a prominent occipital protuberance. The stop is not too pronounced.

The muzzle is the same length as the skull. The bridge of the nose is straight or very slightly convex. The lips are fine, and cover the lower jaw. There is no black on the lips or the palate.

The Braque Saint Germain has a complete set of strong, white teeth meeting in a scissors bite.

Relatively large and well opened, set well into the orbits. Golden yellow in color, with a mild expression.

Set on a level with the eye, and not too long. Rounded at the ends, and slightly detached from the head.

The shoulder blades are long, oblique and muscular. The upper arm is slightly sloping.

Strong, muscular and vertical, with good bone. Pasterns are short and slightly sloping.

The chest is long, deep and broad, with a slightly protruding prosternum. The ribs are long and well sprung. The back is horizontal, and the loin is short, broad and sturdy. The croup is slightly sloping. There is a slight tuck up.

The limbs are well poised when seen from behind.

The thighs are long and well muscled. The rear pasterns are short, vertical and dry.

Long, with tight toes and firm pads. The nails are light.

Set relatively low, strong at the base, and tapering to a point. It does not reach further than to the point of the hock. In action, it is carried horizontally.

Short, and not too fine.

Dull white with orange (fawn) markings. Some ticking is tolerated but not sought after. The ear is fawn, some white is tolerated.

The Saint Germain covers ground well, regardless of the gait it is using. The head is carried above the topline, never lower.

(An Eliminating Fault is a Fault serious enough that it eliminates the dog from obtaining any awards in a conformation event.)
Height one inch or more outside the limits of the standard.

(A dog with a Disqualification must not be considered for placement in a conformation event, and must be reported to UKC.)
Unilateral or bilateral cryptorchid.
Viciousness or extreme shyness.
Albinism.
Overshot or undershot bite.
Brown or black eyes.
Black nose.
Black pigment.
Black in coat.
Black nails. 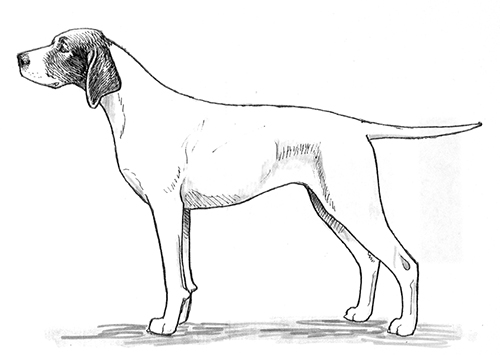