The Braque Francais De Grande Taille was recognized by the United Kennel Club in 2006.

A Braque type pointing dog of medium proportions and noble appearance, powerful, strong and robust but not overly heavy. The females are finer. The skin is supple and loose.

Substantial, but not too heavy.

Almost flat or very slightly rounded, with a slight median furrow. No prominence of occiput. The stop is moderate.

Somewhat shorter than the skull. Broad and rectangular, sometimes convex in profile. The toplines of the skull and muzzle are slightly divergent. The lips are pendant.

The Braque Francais, De Grande Taille has a complete set of evenly spaced, white teeth meeting in a scissors or level bite.

Disqualification: Split nose. Pronounced lack of pigment on the nose.

Deeply set and well opened, with a frank expression. Chestnut brown or dark yellow in color.

Disqualifications: Entropion, ectropion, or pink spots on the eyelids.

Medium length, set at eye level, and not too broad at the base. Slightly folded, and rounded at the tips. Must reach to the rear edge of the nose leather.

Of good length and slightly arched. There is always a slight dewlap.

The shoulders are very muscular, and moderately oblique. The upper arm is strong and well muscled.

The chest is broad and deep to the elbow. The ribs are well rounded. The back is strong and straight, sometimes a bit long, but always well supported. The loin is short, muscular and slightly arched. The croup is slightly oblique. The belly is flat with only slight tuck up.

Very straight and vertical, with fleshy, muscular thighs. The hocks are moderately angulated and the rear pasterns are short.

Nearly round with tight, well arched toes. The nails are strong and the pads are thick and fleshy.

Set off the natural line of the croup. Generally docked, but a natural tail or a natural bob are not a fault.

Disqualification: Complete absence of a tail.

Rather thick and well furnished, finer on the head and ears.

Chestnut brown, either solid or mixed with white. With or without ticking or roaning or tan markings.

(A dog with a Disqualification must not be considered for placement in a conformation event, and must be reported to UKC.)
Unilateral or bilateral cryptorchid.
Viciousness or extreme shyness.
Albinism.
Overshot or undershot bite.
Split nose.
Pronounced lack of pigment on the nose.
Entropion, ectropion, or pink spots on the eyelids.
Complete absence of a tail. 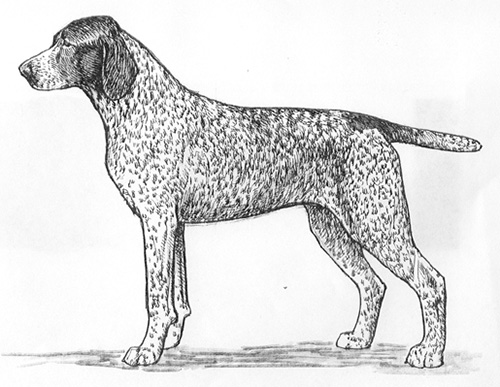