The Bulldog is an ancestor of the Boxer; various terriers were also part of its make-up, which gives the breed its speed, agility and more graceful body. The term “boxer” is British, but the most recent home country for the breed is Germany. “Boxer” seems appropriate since it has a mannerism of using its front legs in combat, much as a man would in fighting.

The breed was virtually ignored until World War II, when it was brought into use as a military or police dog. This helped to insure instant popularity with returning servicemen, and the breed became in demand in the United States.

The Boxer was recognized by the United Kennel Club in 1948.

The Boxer is a medium sized, square built, smooth coated dog, with strong bone and a sturdy but never cumbersome appearance. His muscles are taut, well-developed and molded in appearance. He appears lively and powerful and has a noble bearing.

A breed of completely trustworthy character, the Boxer is energetic, agreeable, self confident and fearless. He is devoted and loyal to his family and a studied watchdog and defender.

The head gives the Boxer its characteristic look. It must always be in correct proportion to the body, appearing neither too light nor too heavy. The harmony of the head depends upon the balance between the skull and foreface. The ratio of the length of the nose bridge to the length of the skull should be 1:2, measured from the tip of the nose to the inner corner of the eye, and the inner corner of the eye to the occiput.

Head properties should remain free of exaggeration so as to not compromise breathing and/or obstruct normal vision.

The skull should be clean and free from wrinkle; however, natural folds occur in the cranial region when the dog is alert. The skull should be lean and angular, slightly arched, never round or flat. The occiput is not too pronounced. There is a slight furrow in the forehead that must not be too deep. The forehead forms a distinct stop. The cheeks are well-developed but not bulging. They join the muzzle in a slight curve.

Powerfully developed, and influenced by the shape of the jaw, the position of the canine teeth and the shape of the lips. The canine teeth must be as far apart as possible and of good length, making the front of the muzzle broad and almost square. In front, the edge of the upper lip rests on the edge of the lower lip and the chin must not markedly protrude over the upper lip when viewed from the front. Neither should the chin be hidden by the upper lip. The tongue and the teeth of the lower jaw must not show when the mouth is closed. The upper lip is thick and padded and fills the space created by the undershot lower jaw. The lip is supported by the lower canines.

Faults: Heavy, “bulldoggy”, too light or non-typical head; teeth or tongue showing when mouth is closed; down face or snippiness; drooling; skull too round, too flat, too broad.

The Boxer's normal bite is undershot. The lower jaw protrudes beyond the upper and curves slightly upward. The canine teeth are widely separated in broad jaws. The teeth are strong and healthy and the incisors are even and set in as straight a line as possible.

The eyes are not too small or deep set, but never protruding. They are dark brown in color, with dark eye rims. Expression is energetic and intelligent.

The nose is broad and black and only slightly upturned. The tip of the nose lies somewhat higher than the root of the muzzle, but the nose must not be forced back into the forehead, as in the Bulldog.

The ears are set high and far apart on the skull. If cropped, they come to a point, are fairly long, and the base is not too broad. If natural, the ears fold forward and lie close to the cheeks.

The neck is clean, firm, and gracefully arched, blending cleanly into the shoulders. It is fairly long, round, strong and muscular.

The shoulder blades and upper arms are long and sloping, forming an apparent right angle. They are connected firmly to the body and should be smoothly muscled.

The forelegs, when seen from the front, have strong bone and are straight and stand parallel to one other. The elbows do not press too closely to the chest wall, nor do they stand off too far. The pasterns are short and almost perpendicular to the ground. The length of leg from elbow to ground is one-half the height at the withers.

The body is square and compact. The withers are pronounced and the back, including the loin, is short, straight, hard, broad and muscular. The chest is deep to the elbow and the forechest is well-developed. The ribs are well-sprung but not barrel shaped and extend well to the rear of the body. The croup is broad and slightly sloping. The underline is elegant due to an upward curve towards short, taut flanks which are slightly tucked up.

Well-angulated with strong, hard muscles that are visible under the skin.

Thighs are long and broad, lower thigh is very muscular. The hock is well defined but not exaggerated. The rear pastern is short. Viewed from the rear, the legs are straight and parallel from hip to foot.

The feet are small, round, tight and well-cushioned.

The tail is generally docked, set high and carried upward. If left natural, it is of normal length and in overall balance with the dog.

The coat is short, hard and shiny, and lies smooth and tight to the body.

Acceptable colors are fawn and brindle. The fawn is found in various shades, from light yellow to a deep dark red. The brindle variety has black stripes on a golden yellow or red brown background. The stripes are clearly defined.

White markings are permissible if attractively distributed, but not required. A black mask is absolutely required. When white stretches over the muzzle, that portion of the black mask disappears. However, there must not be so much white on the muzzle that all the black is displaced.

Disqualifications: Albinism. Any color other than fawn or brindle. White markings that exceed one-third of the entire coat.

Males: 22½ to 25 inches. Females: 21 to 23½ inches. Proper balance and individual quality are of primary importance.

The gait is alive with energy; firm, but elastic. The stride is free, roomy and ground-covering. The carriage is proud and noble.

(A dog with a Disqualification must not be considered for placement in a bench show/conformation event, and must be reported to UKC.)
Unilateral or bilateral cryptorchid.
Viciousness or extreme shyness.
Albinism.
Any color other than fawn or brindle.
White markings that exceed one-third of the entire coat. 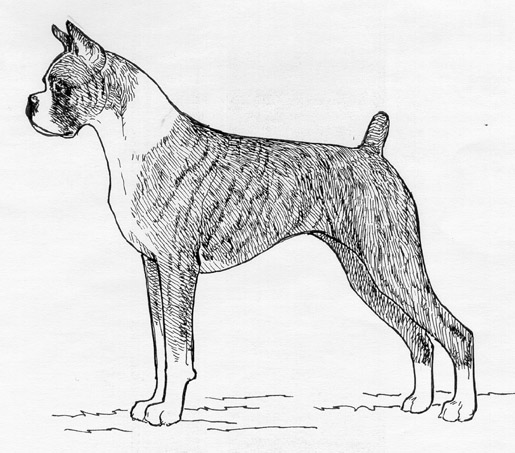