The Bouvier des Flandres breed originated in the agricultural plain of Flanders, Belgium, where it was used mainly for herding and driving cattle. Historically, the term "Bouvier" was applied to any dog that worked with cattle. This breed has also been known by various names, which include Vuilbaard (Dirty Beard), Koe Hund (Cow Dog), and Toucheur de Boeuf (Cattle Drover).

When the Machine Age arrived and it was more economical to transport cattle by truck, it seemed the breed's usefulness was at an end. Bouvier fanciers rallied to save the breed from extinction, therefore preserving this multi-talented dog. The Bouvier has since proven itself, being used for police and army work, as a personal guard dog, as a guide dog for the blind, and in Search and Rescue work. In 1922 the Club National Beige du Bouvier established a single type and drafted a breed standard with the assistance of Bouvier breeders. The breed was first introduced to the North American continent in the 1930's.

The exact origin and development of the breed remains in speculation. One theory states that it was developed using the blood of several of the continental herding breeds. Another states that it is a direct descendant of the Schnauzer.

The Bouvier des Flandres was recognized by the United Kennel Club in 1948.

The Bouvier des Flandres is a compact-bodied, powerfully built, short-coupled dog of upstanding carriage with a rugged appearance.

The Bouvier is even-tempered, agile, steady, resolute and fearless; his gaze is alert and brilliant, acting as a reflection of his intelligence, daring and vigor.

The head is impressive in scale, and is in proportion to body and build. It is accentuated by the characteristic beard and mustache.

The flat, well-developed skull is slightly less wide than long. When viewed from the side, the top lines of the skull and muzzle are parallel. The skull is wide between the ears; the frontal groove is barely marked. Due to the upstanding eyebrows the stop appears more definite than it actually is. The proportions of the length of the skull to the length of the muzzle are three to two.

The muzzle is broad, strong and well-filled-out, tapering gradually toward the nose. The cheeks are flat and lean. The lips are dry and tight-fitting. The jaws are powerful and of equal length.

A full complement of strong, white, even teeth meeting in a scissors bite.

The oval-shaped eyes have a bold and alert expression. When viewed from the front, the axis is on a horizontal plane. The eyes are a dark nut brown. The eye rims are black. The haw is barely visible.

The large, well developed nose is black and round at the edges, with flared nostrils.

The rough-coated ears are alert and placed high. If cropped, they are triangular in contour and in proportion to the size of the head. The inner corner of the ear should be in line with the outer corner of the eye. Natural ears are triangular in shape; slightly rounded at the tips. They fold vertically, and the fold must not stand higher than the top of the skull. The ears should lie flat against the cheeks and be covered with very short hair.

The neck is strong and muscular, widening gradually into the shoulders. When viewed from the side, it has a graceful arch with an upright carriage. There is no dewlap.

The forequarters are strong-boned, well-muscled and straight. The muscular shoulders are relatively long, with good layback. The shoulder blade and humerus are approximately the same length, forming an angle slightly greater than 90 degrees when standing. The elbows are carried parallel, and close, to the body.

The well-muscled and strong-boned forearms, from either view - front or profile - are perfectly straight, parallel to each other and perpendicular to the ground. The strong-boned wrists are exactly in line with the forearms. The pasterns are quite short and slope slightly forward. Dewclaws may be removed.

The body is powerful, broad and short. The length, from the point of the shoulder to the tip of the buttocks, is equal to the height from the ground to the highest point of the withers. The chest is broad, with the brisket extending in depth to the elbow. The ribs are deep and well sprung; the first ribs being slightly curved. The remaining ribs are well sprung and very well sloped as they near the rear, which gives the proper depth to the chest.

The horizontal line of the back should mold unnoticeably into the curve of the rump, which is characteristically wide. The hindquarters are firm and well-muscled, with large, powerful hams. They are parallel with the front legs from both a front and rear view.

The thighs are wide and muscular, with a moderate upper thigh, being neither too straight nor too inclined. The hocks are strong and rather close to the ground. When standing and viewed from the rear, the hocks are straight and perfectly parallel to each other and perpendicular to the ground. In motion they turn neither in nor out. There is a slight angulation at the hock joint.

The rear pasterns (metalarsi) are hardy and lean, rather cylindrical, and perpendicular to the ground when standing. Any dewclaws are to be removed.

Feet are rounded and compact, with close, well-arched toes, which have strong, black nails and thick, tough pads. Feet turn neither in nor out.

The tail is customarily docked to about four inches; leaving two to three vertebrae. It is set high and aligns normally with the spinal column. While in motion, it is preferred that the tail be carried upright. Dogs born tailless are not penalized.

The Bouvier has a rough, tousled coat, giving an unkempt appearance. Its characteristic double coat is capable of withstanding hard work and inclement weather. The outer coat hairs are rough and harsh; the undercoat is fine, soft and dense.

The outer coat is tousled without being curly. It is short on the skull. On the upper part of the back, it is particularly close and harsh, always remaining rough. The coat may be trimmed slightly only to accent the body line. Over-trimming that alters the natural rugged appearance is to be faulted. The undercoat is a dense mass of fine, close hair, which becomes thicker in winter. Together with the topcoat, it forms a water resistant covering.

The mustache and beard are very thick, with the hair being shorter and rougher on the upper side of the muzzle. The upper lip, with its heavy mustache, and the chin, with its heavy and rough beard, gives the gruff expression so characteristic of the breed.

The eyebrows are made up of erect hairs and accentuate the shape of the eyes without ever veiling them.

All colors from fawn to black, including salt and pepper, gray and brindle. A small white star on the chest is allowed. Other than the colors and patterns listed under "Serious faults" below, no one color or pattern is to be favored.

Any dog deviating from the minimum or maximum limits shall be severely penalized.

The complete Bouvier des Flandres is harmoniously proportioned to allow for a free, proud and bold gait. The reach of the forequarters compensates for, and is in balance with, the driving power of the hindquarters. While moving at a trot, the back remains firm and flat. The gait is the logical demonstration of the structure and build of the dog. As speed increases, the dog single tracks. 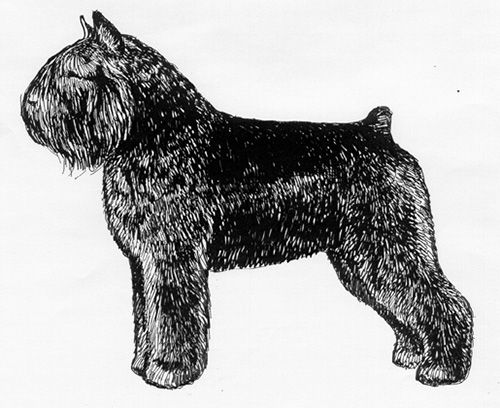