The Borzoi was once known as the Russian Wolfhound and did originate in Russia, where coursing hounds of this type have been known of since the 13th century. The breed was used by the Russian aristocracy to hunt the populous wolves. They were often presented as gifts to other members of the European nobility, and were almost never sold. Because the breed was seen as a symbol of the aristocracy, it was almost decimated during the Bolshevik Revolution. A few dedicated breeders managed to save the breed and exported specimens to other parts of the world, especially to Britain, Canada and the United States.

The Borzoi was recognized by the United Kennel Club (as the Russian Wolfhound) in 1914.

Since the Borzoi was originally bred and used for the coursing of wild game on an open terrain, they relied on sight rather than scent. The physical structure and characteristics of the breed mirror the need to chase, catch and hold their quarry. Primary emphasis is placed on sound running gear in a well-conditioned animal, accompanied by agility and courage and a strong neck and jaw.

The Borzoi always possesses unmistakable elegance and flowing lines, and is graceful whether in motion or at rest. Males are masculine while not being coarse; females are feminine and refined.

The Borzoi today is highly prized as a companion animal, being intelligent, calm and quiet.

Viewed from any angle, the head is lean, long and narrow, with an aristocratic appearance. In profile, the top lines of the skull and the muzzle form one long, slightly convex line.

The skull is narrow. In profile, it is nearly flat. From above, it appears to be an elongated oval. The stop is only very slightly marked.

The muzzle is at least as long as the skull. The underjaw is strong. The top of the muzzle is slightly arched near the nose. The lips are fine, clean and close, and black in color.

A full complement of large, strong, white teeth meet in a scissors or level bite.

The rather large, almond shaped eyes are set on the skull somewhat obliquely. They are dark In color, with a rather soft, intelligent expression. The eye rims are dark.

The black nose is large and considerably prominent in relation to the lower jaw.

The active, responsive ears are small and fine. When in repose, the ears lie back on the neck, with the tips almost touching behind the occiput. They are raised when the dog is at attention, the tips sometimes falling over.

Long, clean and flattened on the sides, the neck is slightly arched and never carried high.

The forelegs are long, clean, perfectly straight and parallel. The length of the foreleg from elbow to ground is equal to or slightly greater than half the height at the withers. The bone of the forearm is oval in shape; seen from the front it is narrow, seen from the side it is broad. The pasterns are slightly oblique.

In proportion, the Borzoi is slightly longer than tall. The chest is deep and oval in shape and there is a prominent forechest. The ribs are flatter right behind the shoulder blades and then gradually spring more towards the back of the ribcage. They are slightly prominent, and long. The withers are not high. The back is broad, well muscled and elastic, and together with the loin and croup forms a curve, which is more pronounced in the males. The highest point of the curve is situated in front of the middle of the loin, or at the 1st or 2nd lumbar vertebrae. The loin is long and prominent and the croup is long, broad and slightly sloping.

Viewed from behind, the rear legs are straight, parallel and set slightly wider than the forelegs. When the dog is standing naturally, a line dropped from the point of the buttocks should fall in front of the center of the hock joint.

The upper thighs are well muscled, long and obliquely placed. The lower thighs are long and there is good angulation at the stifle. The hock is well angulated and the rear pastern is vertical and not long.

The hare-shaped feet have well-arched knuckles. The toes are close and well padded.

The tail is low set, long and thin. It is sickle or saber shaped and long enough to reach to the hip when pulled between the rear legs. It is well furnished with hair. When the dog is moving, the tail is raised, but not above the level of the back.

The long, silky coat may be flat, wavy or loosely curled. It is short and smooth on the head, ears and front of the legs. On the shoulder blades and the croup the hair forms finer curls. The feathers on the hindquarters and tail are long and profuse, but they are less so on the chest and back of the forelegs. The coat on the neck is dense and abundant.

Any color or combination of colors is acceptable.

Mature males, measured at the withers, must be at least 28 inches in height.

Mature females measured at the withers, must be at least 26 inches in height.

Mature males and females above the respective limits should not be penalized, but quality must not be sacrificed in favor of size.

Serious Faults: Mature males and females below the minimum height.

The Borzoi moves with an extended trot that is very supple, effortless and lifting. When hunting, the gallop is extremely fast with very long strides. 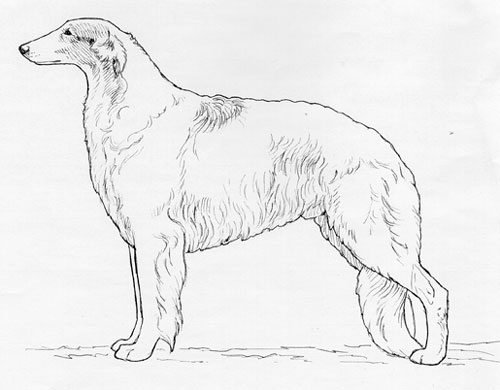