This standard has been framed for three real purposes. First, to act as a guide for the Judges at Bench Shows. Second, to furnish suggestions for breeders for improving the breed, and to promote higher ideals for their breeding programs. Third, to advance this breed to a state of similarity throughout the country.

It is most likely that the Bluetick is principally descended from the quick foxhounds of England with some introduction of the blood of various French hounds which were used for hunting big game. The French dogs were known as being very cold nosed. George Washington received five such French hounds from General Lafayette.

Blueticks were originally registered with UKC as English. In 1946, at the request of the Bluetick fanciers, UKC began registering Blueticks as a separate breed.

The Bluetick Coonhound should have the appearance of a speedy and well-muscled hound. He has a neat body that is well proportioned; not clumsy or chunky in build. He has a glossy coat, and clear, keen eyes, with a typical pleading hound expression, never wild or cowering. As a Scenthound, the Bluetick’s natural position of the head and tail in motion is parallel to the ground; the tail is not curled over the back or dropped between legs.

The Bluetick is active, ambitious and speedy on the trail. It should be a free tonguer on trail, with a bawl, squall, chop or bugle voice when striking and trailing, with a distinct changeover on tree of bawling, chopping, or combination of both, and be willing to be hospitable to both men and dogs which are around them.

The head is broad between the ears, with a slightly domed skull. Total length of head from occiput to end of nose is 9 to 10 inches in males, and 8 to 9 inches in females. The stop is prominent. The muzzle from the stop to the end of the nose should be well proportioned in width with the skull, with depth of flews well covering the lower jaw. Depth of foreface should be 3 to 4½ inches.

Rather large, set wide apart at the stop. Round in shape, and dark brown in color, but not lighter than light brown. Eyelids are tight and close fitting. No excess third eyelid should be apparent. Expression is a typical pleading hound expression, never wild or cowering.

A scissors bite is preferred; an even bite is acceptable.

The ears are attached slightly below top of skull, but set low enough on head to be devoid of erectile power. Should be thin, with a slight roll, taper well towards a point, and reach well towards the end of the nose when pulled forward. Well attached to head to prevent hanging or backward tilt.

From stop to end of nose should be square, well proportioned in width with the skull, with depth and flews well covering the lower jaw. Depth of 3 to 4½.

Muscular and of moderate length, rising with a slight taper from shoulder to head that allows the head to be carried well up but not vertical (goose necked). Throat clean, with only a slight trace of dewlap.

Shoulders clean and sloping, muscular, but not too broad or rough, giving the appearance of freedom of movement and strength.

The forelegs are straight from shoulders to feet, well boned, and muscular, with strong straight pasterns. Forelegs should appear straight from either side or front view.

The chest should show considerable depth (extending well down toward the elbow), rather than excessive width, to allow plenty of lung space. The forechest is moderate fairly even with the point of the shoulders. Girth of chest for males 26 to 34 inches, for females 23 to 30 inches. Ribs are long and well sprung, tapering gradually toward a moderate tuck-up. Back is muscular and firm, slightly lower at hips than at withers. Loin is broad, well muscled and slightly arched. Proportion (measured from point of shoulder to base of tail and withers to ground) is square or slightly longer than tall.

Hips are strong and well muscled, not quite as wide as rib cage.

Hind legs are straight from hip to foot when viewed from behind. The hocks strong and moderately bent when viewed from the side. Thighs have ample muscular development for an abundance of propelling power. Breeching full and clean down to hock.

Round (cat-like), with well-arched toes. Pads are strong, hard and thick. The size of the feet should be proportionate to the size of the dog.

Set on slightly below the line of the back, strongly rooted, and tapering to a moderate length. In balance to the overall length of the hound. Well coated but without flag. Carried gaily, slight curve or parallel to ground, but not turned forward over the back or dropped between legs.

Medium coarse, and laying close to the body, appearing smooth and glossy. Not too rough or too short.

A smooth lithe gait is essential. The action of the Bluetick Coonhound is a strong, driving, smooth gait. The over-all appearance in motion should be that of effortless power, endurance, speed, agility, smoothness and grace.

When viewed from the front, the front legs must reach well out in front in straight lines, with pasterns strong and springy as if to pull in the ground. Hackneyed motion is not desired, nor is paddling or weaving.

The rear legs follow the front legs, which give forceful propulsion, thus the Bluetick moves in a straight pattern forward.

When viewed from the side there should be a noticeable drive, with a ground-covering stride.

Ideal weight for males 55 to 80 pounds; females 45 to 65 pounds, to be in proportion to the size of the hound.

Preferred color is a dark blue, thickly mottled body, spotted by various shaped black spots on back, ears and sides. Preference is to more blue than black on body. Head and ears predominantly black. With or without tan markings (over eyes, on cheeks, chest and below tail), and red ticking on feet and lower legs. Red may be eliminated as to the desire of the breeder, as well as the amount of black on the body and the tan head coloring.

A fully blue mottled body is preferred over light ticking on the body. There should be more blue ticking than white in the body coat.

(A dog with an Eliminating Fault is not to be considered for placement in a bench show/conformation event, nor are they to be reported to UKC.)
Males under 22 inches or over 27 inches.
Females under 21 inches or over 25 inches. (Entries in Puppy Class are not to be eliminated for being undersize.)

(A dog with a Disqualification must not be considered for placement in a bench show/conformation event, and must be reported to UKC.)
Unilateral or bilateral cryptorchid.
Viciousness or extreme shyness.
Albinism.
Undershot or overshot.
Deaf.
Blind.
Any color or combination of colors other than described. 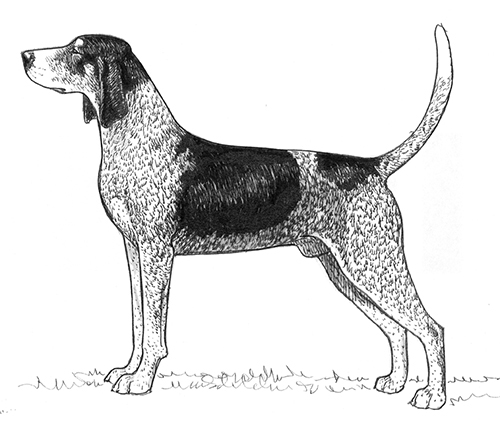