The Bloodhound is a trailing scenthound, tracing its origins to the ancient French St. Hubert Hound, a type of hound raised for their tracking and hunting ability. They are experts at cold-trailing - following an old, “cold” trail making them exceptional tracking dogs.

The Bloodhound was recognized by the United Kennel Club in 1914.

The Bloodhound is characteristically a trailing scenthound and possesses those characteristics indicative of that type of hound, which includes hanging ears, packing behavior and methodical tracking ability.

The breed is large, massive and very powerful, and stands over more ground than is usual with other scenthounds. The skin is thin to the touch and is extremely loose, being most noticeable about the head and neck, where it hangs in deep folds. No characteristic should be so exaggerated as to destroy the harmony of the whole dog or give an overdone appearance.

Gentle, placid, kind and sociable with people, the Bloodhound is particularly attached to its owner. It may be somewhat reserved and stubborn. It is tolerant of other dogs and domestic animals. It is sensitive to both praise and correction, and never aggressive.

The head is the most characteristic feature of the breed, being imposing, majestic and full of nobility. It is deep but narrow in relation to its length and long in relation to the length of the body. The bone structure is clearly visible.

The skull is deep, long and rather narrow, with flattened sides. The brows are not prominent and the occiput is distinctly marked. There is a slight stop. On the forehead and cheeks, the abundant thin skin forms wrinkles and deep folds that fall when the head is carried low and continue into the strongly developed folds of the dewlap. The skin is less abundant in the female.

The muzzle is as long as the skull, deep and of equal width throughout its length. The topline of the muzzle is either straight or slightly convex, and lies in a plane that is nearly parallel to the line of the skull. The cheeks are hollow and lean, especially under the eyes. The lips are very long and limp, forming a right angle with the upper line of the foreface, giving the muzzle a square profile. Towards the corners of the mouth, they become fleshy flews that blend into the dewlap. The edge of the lips is well pigmented, either black or brown depending on the color of the dog.

The Bloodhound has a complete set of strong, white teeth that meet in a scissors or level bite.

The eyes are dark brown or hazel, but may be amber in dogs without a black saddle or mantle. They are moderate in size, oval in shape and neither sunken nor protruding. The complete iris should be visible. The lids fit normally, but some slack in the lower lid that allows the haw to show is equally allowed. The eyelashes should not touch or interfere with the eyes. Expression is gentle, kind and dignified, with a rather melancholy air.

The nose is black or brown, but always black on black and tan dogs. It is broad and well developed, with wide open nostrils.

Thin and supple, delicate and velvety to the touch, with very long lobes that reach at least beyond the end of the nose. The ears are set very low and fall in graceful curves.

The neck is long and strong, with the skin of the throat very developed into a double dewlap that is less pronounced in the female.

The shoulder blades and upper arms are long and sloping, forming a good angle; they are well muscled without being over loaded.

The forelegs are straight, with strong, round bone. The elbows are set close to the body, turning neither in nor out. The wrist is firm and the pastern is strong and slightly sloping.

The body is slightly longer than tall in a ratio of 10:9. The topline and underline are almost parallel. The chest is oval in shape, broad and well let down, forming a keel between the front legs. The forechest and point of shoulder stand out. The ribs are well sprung. The withers are slightly pronounced. The back is straight, broad, solid and long. The loin is short, strong and slightly arched. The croup is well muscled and nearly horizontal, never falling away. The underline is almost horizontal, with the belly only slightly tucked up.

The hindquarters are solid, powerfully muscled, and balanced with the forequarters.

The upper and lower thighs are of good length, and strongly muscled. The stifle and hock are well angulated. The rear pastern is short and strong.

The feet are compact and very solid, with well arched, tight toes and solid, thick pads.

Long, strong, thick and set high, the tail tapers gradually towards the tip and is carried in saber fashion, never curled or twisting sideways. The underside of the tail is furnished with harsh hair that becomes shorter towards the tip.

On the body, the close lying hair is short, dense, quite harsh and weather proof. On the head and ears the coat is very short and soft to the touch. The underside of the tail is furnished with hair that is a little longer and harsher.

Supple, loose and elastic. Overdone wrinkles and folds must never harm the eyes. Folds of skin on the body are not desirable.

The acceptable colors are black and tan, liver and tan, and solid red. On the bi-color dogs, the amount of saddle or mantle varies. The colors are not always clearly stated or distinctly defined. In the darker areas, the coat may be interspersed with lighter or badger hairs.

For the solid red dogs, the color may vary from light to dark red. Washed out colors are not desirable.

A small amount of white is permissible on the chest, feet and tip of the tail.

Disqualification: Any color other than those described in the standard. Excessive white, such as white going up the legs, white spreading beyond a patch on the chest, or patches of white anywhere else on the body.

At a trot the movement is easy, springy and free, covering more ground than any of the other scenthounds. There is some roll but no crabbing. The topline remains horizontal.

(A dog with a Disqualification must not be considered for placement in a conformation event, and must be reported to UKC.)
Unilateral or bilateral cryptorchid.
Viciousness or extreme shyness.
Albinism.
Overshot or undershot bite.
Wry jaw.
Lips pink without pigmentation.
Yellow (hawk) eyes.
Any color other than those described in the standard.
Excessive white, such as white going up the legs, white spreading beyond a patch on the chest, or patches of white anywhere else on the body. 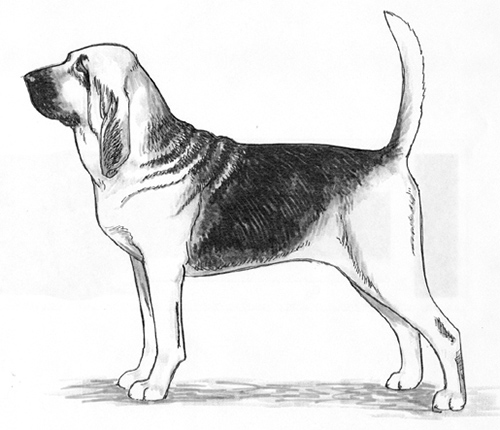