The Black Russian Terrier was created in Russia during the late 1940s and early 1950s by selective interbreeding of several breeds, including the Rottweiler, Giant Schnauzer, Airedale Terrier and Newfoundland. The Giant Schnauzer is considered to be the main ancestor of the breed.

The initial breeding was supervised by the military cynological school outside Moscow, and the dogs were based in their kennels named “Red Star”. The aim of the creators of the breed was the development of a large, brave, strong and manageable working dog with pronounced guarding instinct; a dog that could be useful for many services. The breed was recognized by the FCI in 1984.

The Black Russian Terrier was recognized by the United Kennel Club on January 1, 1995.

The Black Russian Terrier is a strong, agile, large dog. It is heavily boned, and has well-developed muscles. The length of the body is slightly longer than the height at the withers; may be more pronounced in females. The skin is tight and well-fitted without folds, elastic, and evenly pigmented. The breed is capable of great endurance and is adaptable to a wide range of climates, including harsh conditions. Males are masculine and larger, stronger, bulkier and more powerful than bitches.
Disqualifications: Unilateral or bilateral cryptorchid.

The breed is energetic, stable, dignified, confident, and lively. They are friendly, but assertive, wary of strangers and have strong protective instincts, but quickly calm down at the disappearance of a threat. Black Russian Terriers have great endurance, are capable of being trained to a wide variety of tasks, and adapt well to various climate conditions. Disqualifications: Extreme viciousness or shyness.

Large, massive, and in proportion to the body. The length of the head should not be less than 40 percent of the dog’s height at the withers. The muzzle is slightly shorter than the skull.

Moderately broad, with a flat forehead and well-rounded cheekbones. The toplines of the skull and muzzle are parallel. The stop is marked, but not too pronounced.
Fault: Round skull.

Strong, broad, and slightly tapering in width from stop to tip, the muzzle is slightly shorter than the skull. The moustache and beard give the muzzle a rectangular appearance. The lips are thick, well pigmented and tight.
Faults: Coarse head. Light, weak head. Fine head. Stop too steep. Snipey muzzle. Slack or loose lips.

The medium-sized, triangular ears are high set and symmetrical. They are pendant; the front of the ears must fit closely to the cheeks. Ear leather is dense, without folds.
Faults: Long or low-set ears. Flying ears set away from the cheekbones. Erect or semi-erect ears.

The nose is large and black.
Disqualification: Nose color other than black.

Strong, dry and muscular; and set at an angle of 45 to 50 degrees. The length of the neck is approximately equal to the length of the head. The nape is strong and well developed.
Faults: Neck too short; not muscular enough.

The shoulders are long, broad, and well laid back. The angle between shoulder blade and upper arm is approximately 100 degrees. The distance from the elbow ulna to the ground is equal to from 50 to 52 percent of the dog’s height at the withers.

The thick forelegs are straight and parallel when viewed from the front.

Muscular, no shorter than the shoulder blades.

Straight, thick, round bone. Vertical when viewed from the front and side.

The elbows lie close to the body.

Short, massive, and slightly sloping when viewed from the side.
Faults: Shoulders too straight. Forearms too short. Elbows turned in or out. Little or no angulation between the shoulder blade and upper arm. Weak pasterns.
Serious Faults: Bowed forearms.

Slightly sloping, from the withers to the root of the tail.

High and well-developed. More pronounced in males than in females.

Strong, straight and muscular. The length of the actual back is equal to half the length measured from the withers to be base of the tail.

Wide, short, muscular and slightly arched. The length is equal to half the length of the actual back.

Deep, long and broad, with slightly sprung ribs. The shape of the thorax (in cross section) is oval. The breast bone is long, and the forechest slightly extends the shoulder joint, and is well-muscled. Depth of chest should not be less than half of the height at the withers.

On the same line as the elbow joint, or slightly below. Belly is moderately tucked up. Flanks only slightly developed.
Faults: Withers not pronounced. Sway back. Narrow back. Loin too long; narrow; not muscular enough.
Serious Faults: Croup horizontal. Croup too steep. Shallow chest. Short chest.

The well-muscled hindquarters are in balance with the forequarters.

No shorter than thighs.

Front feet a large, compact and round. The hind feet are slightly smaller than the front feet, tending toward an oval shape. Nails and pads are black.
Faults: Feet turning in or out.

Thick at the root, and set high. When the dog is moving, the tail is carried jauntily, but the root of the tail does not incline over the back (squirrel tail). The tail is traditionally docked in the country of origin. The length and shape of an undocked tail had no influence on the evaluation of the dog. The preferable shape of an undocked tail is sabre or sickle.
Serious Fault: Squirrel tail.

Rough and thick double coat. The outer coat is coarse, extremely dense, and wavy. The undercoat is soft, short and dense. The natural, untrimmed coat varies from two inches to six inches in length. The legs are covered in a long, dense hair. The head furnishings form a fall over the eyes, and mustache on the muzzle. Recommended grooming for presentation in the show ring. The clipped coat should emphasize the character of a strong and assured dog, and by no means be excessively decorative. Clipping should accentuate the massive head with flat forehead, well-lying ears, strong neck, and well-constructed, strong body. The coat is left longest on the legs, the fall, and around the muzzle.
Faults: Soft guard coat. No undercoat.
Serious Fault: Silky guard coat.
Disqualifications: Smooth guard coat. Lack of head, chest and leg furnishings.

Black. Solid black is the most desired. Black with insignificant, scattered gray hair, not to cover more than a third of the entire body; and Black and Tan (black with tan points) are permissible, with soundness, structure and overall breed type being of the utmost importance. Tan points on Black and Tan dogs are found over each eye, on the sides of the muzzle and cheeks, on the undersides of the ears, on all feet and/or legs, and under the tail. Tan points on the chest on Black and Tan dogs are optional; neither absence nor presence is penalized.
Fault: Rusty shading in the guard coat.
Eliminating Fault: Any other color than described above.
Disqualifications: Albinism. White spots or markings. Clearly defined patches of gray.

Free, and well-balanced, with smoothly bent joints. Typical gait is an energetic trio with long strides which comes from the powerful rear drive and significant reach in the forequarters. Topline to remain firm.
Fault: Pacing.
Serious Faults: Movement restricted; sluggish or heavy.

(An Eliminating Fault is a Fault serious enough that it eliminates the dog from obtaining any awards in a conformation event.)
Any other color than described above.

(A dog with a Disqualification must not be considered for placement in a conformation event, and must be reported to UKC.)
Unilateral or bilateral cryptorchid.
Extreme viciousness or shyness.
Any bite deviation from scissors.
Missing teeth.
Nose color other than black.
Wall eye.
Different colored eyes.
Albinism.
White spots or markings
Clearly defined patches of gray hair.
Smooth guard coat. Lack of head, chest and leg furnishings. 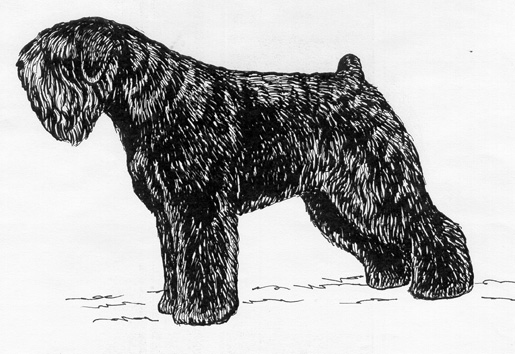