The Black Forest Hound (also known as the Slovakian Hound) is an endurance trailing hound used on wild boar and predators.

The Black Forest Hound was recognized by the United Kennel Club in 2006.

A solid, yet lightly build, rectangular hound that is always solid black with tan markings.

The breed is spirited, and it has an extraordinarily well developed sense of direction.

The skull is a fairly long, rectangular shape. It is slightly domed. The frontal furrow is marked. There is no prominence of occiput. The stop is fairly abrupt.

The muzzle is long and not too broad. The nasal bridge is straight, and lies in a plane that is parallel to the skull.

The Black Forest Hound has a complete set of evenly spaced, white teeth meeting in a scissors bite.

The black nose is relatively large.

The deeply set eyes are almond shaped and dark, with a lively, courageous expression.

The ears are set above the line of the eye. They are medium length, have rounded tips and are carried flat against the cheeks.

Rather short and clean.

The shoulder blades and upper arms are rather short. They meet at an angle of 110 degrees.

The legs are straight and dry. The pasterns are short and sloping.

The body is somewhat longer than it is tall. The chest is deep and broad, with well developed forechest. The ribs are well sprung and slanting. The back is straight and medium long. The loin is broad, firm and muscular. The croup is rounded. There is moderate tuck-up.

The angulation of the pelvis and femur is 130 degrees.

The thighs are long, broad and muscular. The angulation at the stifle is 130 degrees, and at the hock it is 150 degrees. The rear pasterns are moderately slanting.

Set somewhat low, tapering to the tip and reaching to the hock, the tail is pendant in repose and carried in an upward curve but not above the back.

The outer coat is one to two inches long, medium coarse, close fitting and dense. The undercoat is dense, especially in winter.

Black with tan markings on the legs. 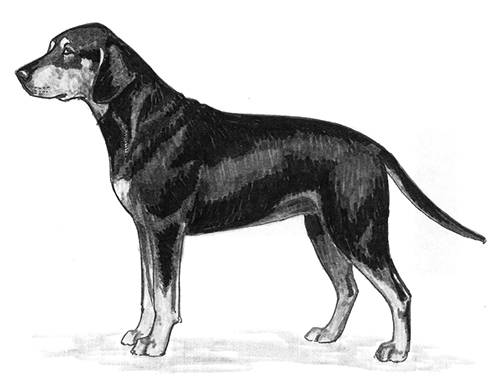