The Billy originated in the 19th Century in Western Central France. They were created by combining a number of hound breeds which are now all extinct. They were, and still are, used to hunt roe deer and wild boar in packs.

The Billy was recognized by the United Kennel Club January 1, 1996.

Difficult off lead, and extremely fast. Intelligent and courageous, and they can be other dog aggressive.

Forehead slightly domed, and not very broad. The occipital crest is prominent. The stop is well defined.

Rather square, and moderately long, with upper lips that cover the lower lips, but are not pendulous or thick.

The Billy has a complete set of evenly spaced, white teeth meeting in a scissors bite. A slight overshot bite is acceptable.

Well developed, and black or red brown in color.

Medium in size, and set on relatively high for a French hound. They are rather flat and the ends turn in slightly.

Strong, rather round, and of medium length. A slight dewlap is accepted.

The shoulder blades are clean and fairly long.

Strong and vertical, with flat bone.

The chest is very deep, and quite narrow. The ribs are flat. The back is rather wide, strong and lightly arched. The loin is wide and slightly arched, and the croup is sloping. The flank is fairly long and has a slight tuck up.

The thighs are moderately muscled. The hocks are slightly bent, wide and strong.

The feet are rather round, with tight toes.

The tail is long, strong, and is sometimes slightly feathered.

Pure white or off white, with or without orange or lemon patches or mantle.

(A dog with a Disqualification must not be considered for placement in a conformation event, and must be reported to UKC.)
Unilateral or bilateral cryptorchid.
Viciousness or extreme shyness.
Albinism.
Black or red hair.
Pronounced overshot bite. 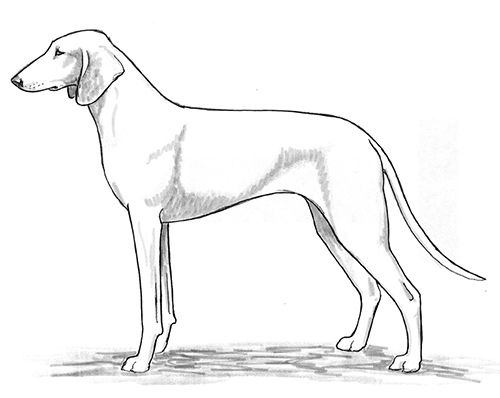