The goals and purposes of this breed standard include: to furnish guidelines for breeders who wish to maintain the quality of their breed and to improve it; to advance this breed to a state of similarity throughout the world; and to act as a guide for judges.
Breeders and judges have the responsibility to avoid any conditions or exaggerations that are detrimental to the health, welfare, essence and soundness of this breed, and must take the responsibility to see that these are not perpetuated.
Any departure from the following should be considered a fault, and the seriousness with which the fault should be regarded should be in exact proportion to its degree and its effect upon the health and welfare of the dog and on the dogs ability to perform its traditional work, which includes acting as a companion.

The Biewer Terrier is a fine- to medium-boned, elegant, long haired, tri-colored toy-type terrier. Ideally, the hair parts down the middle and hangs straight and evenly on both sides of the dog as though a comb was used to part the hair from the nose to the end of the topline. Hair is straight and without an undercoat and should be at least three-quarters of the way to the ground, but any length hair is acceptable. Dogs used in performance events may be clipped for safety purposes.
Although the outline of the dog gives the impression of a square, the body length can be slightly longer than tall.
Disqualifications: Unilateral or bilateral cryptorchid.

The Biewer Terrier is intelligent, loyal and very devoted to their human family. They have a fun-loving, child-like attitude that makes them a great companion for all ages.
Disqualifications: Viciousness or extreme shyness.

Slightly round, with a moderate stop.

A full complement of strong, white teeth meet in a level or scissors bite.

The eyes are dark brown, and medium in size, and either round or almond shaped. They are placed to look straight ahead. They have an intelligent expression. Eye rims are black.
Disqualification: Liver colored eye rim pigment.

The small, v-shaped, upright ears are covered with hair. They are set moderately wide and to the back of the head. The base is level with the eyes. Tips should be shaved.
Fault: Ears that are not erect.

The neck is of good length, is set to allow for high head carriage, and blends smoothly into the shoulder region.

The forelegs are absolutely straight, muscular, and covered with hair. Dewclaws may be removed, but it is not mandatory.

The topline is level. The point of the shoulders is level with the point of the buttocks. The chest is of good width and reaches to the elbows. The rib cage is moderately sprung. The loin is short, but strong. The underline is slightly tucked up.
Faults: Roach back. Rounded back.

Stifles are well bent when viewed from the side.

Hind legs are straight when viewed from the rear, and well-covered with hair.

The feet are round. Nails may be white or black.

The full tail is carried high over the body in a teacup handle (curved) fashion. It is covered with a long, flowing plume of hair. When the tail is at rest, it reaches to or past the stifles.

All colors are strong, clear and rich. The Biewer Terrier is black or blue and white, with tan/gold trim on the head, and around the anal opening, only. The amount of black/blue and white present on each dog is up to personal preference, with none preferred over another.
The head coloring is (Blue/Black, White, Gold/Tan); (Blue/Black, Gold/Tan); (Gold/Tan, White) in good symmetry.
There must be black or blue on the topline, the amount of which is immaterial. It may vary anywhere from a full saddle to individual spots, as long as there is some black or blue.
The white from the chest should come up the neck to cover the chin. Stomach, legs and tip of the tail is white.
Disqualification: Albinism.
Eliminating Faults: Patches of brown, gold or tan hair anywhere on the body or legs. Any solid color hair, other than white, coming down the leg to the feet.

The preferred weight range is from four (4) to eight (8) pounds.

They exhibit a smooth and flowing movement, with good reach and strong drive and straight action front and rear. The topline remains level while gaiting.

(An Eliminating Fault is a Fault serious enough that it eliminates the dog from obtaining any awards in a conformation event.)
Patches of brown, gold or tan hair anywhere on the body or legs.
Any solid color hair, other than white, coming down the leg to the feet.

(A dog with a Disqualification must not be considered for placement in a conformation event, and must be reported to UKC.)
Unilateral or bilateral cryptorchid.
Viciousness or extreme shyness.
Albinism.
Liver colored pigment (nose, eye rims). 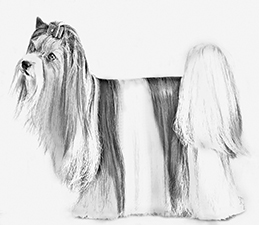