The Bergamasco is an ancient North Italian breed, a shepherd used for guiding herds in the Po Valley during the winter and in the mountains of the Alps during the summer. The number of dogs is great in the Bergamasco Valleys, where the breeding of sheep developed in ancient times.

The Bergamasco was recognized by the United Kennel Club January 1, 1995.

The Bergamasco is herding dog of medium size and rustic appearance. The body is compact and square in profile. The Bergamasco’s characteristic feature is its unique coat, made up of three types of hair. The coat forms “flocks” or loose mats, which cover the dog’s body and legs, and protect the dog from weather and predators. The hair on the head is typically long and hangs over the eyes.

The function of the Bergamasco is to both guide and guard the herd. He is vigilant and determined when working. His learning faculty and determination, combined with his moderation and patience, make him an excellent guard and companion dog, suited to the most different uses. He is able to establish a close relationship with man.

The head is proportionate to the size of the dog, with the skull and muzzle of equal length, parallel to one another, and joined at a pronounced stop. The skin on the head is tight with no wrinkles.

The skull is slightly domed between the ears, and rounded at the forehead. The skull is at most as wide as it is long, and features a prominent occiput and a marked median furrow.

The depth and width of the muzzle, measured at midpoint, are each about half the length of the muzzle. The muzzle is blunt, tapering only slightly toward the nose. The lips are tight and of black pigment. They just cover the teeth. The inner corner of the mouth reaches back to a vertical line drawn down from the outside corner of the eye. The cheeks are not very prominent.

The jaw is wide, with a full complement of strong, evenly spaced, white teeth meeting in a scissors bite. The lower jaw is large and strong. The incisors are regularly aligned.

Disqualifications: Overshot or undershot bite that is accentuated or disfiguring.

The dark nose is fully pigmented.

The eyes are large, slightly oval, and set just slightly obliquely. Eye color is dark chestnut, with the darkness of the color varying with the color of the coat. The eye rims are tight-fitting and black. The eyelashes are particularly long so they can lift the hair that falls over the eyes. The expression is attentive and calm.

The ears are soft and thin, and hang down on either side of the face. The ears are set on high. At its widest point, the ear is from 2½ to 3 inches wide. Ear length does not exceed half the length of the head, and shorter is preferred. The top two-thirds of the ear is triangular in shape, with slightly rounded tips. When the dog is alert, the ears prick up at the base, with the top two-thirds semi-drooping. Viewed from the side, the ears appear to be an extension of the curve of the back of the neck. The ears are covered with soft, slightly wavy hair, forming fringes at the tip.

The neck is strong, slightly arched, and, measured from the nape to the forward edge of the withers, should be about 20 percent shorter than the length of the head. In its center, the perimeter of the neck must be at least twice its length. There is no dewlap. The hair on the neck must be dense.

The upper arm is just slightly longer than the scapula, about 7 inches. The angle formed by the scapula and upper arm varies between 105 and 125 degrees.

The vertical forearm is about the same length as the upper arm and is placed so that the point of the elbow is on a vertical line falling from the tops of the scapulae. The elbows are neither close to the body nor out, but are set on a plane parallel to the body. The wrist follows the vertical line of the forearm and is very mobile. The pisiform bone protrudes. The pasterns are straight when viewed from the front, and slightly sloping when viewed from the side.

The Bergamasco is square, with the length of body measured from point of shoulder to point of buttocks equal to the height measured at the withers. Permitted, but not desirable, is a slight margin of tolerance which in no case must be more than ¾ (three-quarters) of an inch. The ribs are well-sprung and let down to the elbows. The depth of the rib cage is equal to half the dog's height at the withers. The line of the back inclines very slightly downward from prominent withers to a strong, broad back with a straight upper line. The loin is well-muscled and broad. The croup is slightly sloping, about 30 degrees downward from the horizontal. Tuck-up is nearly absent.

The lower thigh is as long as the upper, with strong bone and lean muscles. It slopes downward and backward, forming a moderate angle of about 135 degrees at the stifle. There is a well-defined furrow between the tendon and the bone above the hock.

The distance from the point of hock to the ground is no less than 25 percent of the height at the withers. Viewed from behind, the rear pasterns should be vertical and parallel to one another. Viewed from the side, the rear pasterns are vertical and placed so that the hocks just slightly extend past a vertical line dropped from the point of buttock. The angle of the hock joint is about 140-145 degrees.

The feet are oval, with toes well knit and arched. The pads of the feet are tough and dark. The toenails are strong and black. The feet are well feathered with hair, including between the toes. Rear dewclaws must be removed. Front dewclaws may be removed.

Disqualifications: No tail. Stump tail. Tail rolled over the back.

The Bergamasco coat is made up of three types of hair: Undercoat, “goat hair,” and outer coat.

The undercoat is short, dense, and of fine texture. It is oily to the touch and forms a waterproof layer against the skin. The “goat hair” is long, straight, and rough in texture. The outer coat is woolly and somewhat finer in texture than the “goat hair.”

The “goat hair” and outer coat are not distributed evenly over the dog and it is this pattern of distribution that is responsible for the formation of the characteristic flocks. The coat from the withers down to the midpoint of the body is mostly “goat hair” which forms a smooth saddle in that region. On the back of the body and the legs, the woolly outer coat is abundant and mingles with the reduced quantity of “goat hair” in that region to form the flocks. The flocks are larger at the base than the end, flat, irregular in shape, and may sometimes open in a fan-shape. The hair on the legs also hangs in flocks rather than feathering. The flocks are never combed out. The hair on the head is mostly “goat hair” but is somewhat less rough in texture and hangs over the eyes.

Solid gray or with gray patches, all possible shades of gray (including shadings of isabella and fawn), up to and including solid black, provided it is not shiny or lustrous. Solid white is not allowed but white markings are acceptable if they cover no more than one-fifth of the coat.

Disqualification: White on more than one-fifth of the total area of the coat; albinism.

Males ideally stand 23½ inches, and females 22 inches, measured at the withers. One inch taller or shorter than the ideal is acceptable.

Because a herding dog is required to be in constant motion while the flock is being driven, correct, efficient movement is essential. The natural and preferred gait for the Bergamasco is a free, extended, elastic trot with both front and rear feet remaining close to the ground. Pasterns are supple and flex freely. When moving, the dog’s head moves forward so that the head is nearly even with the back.

(A dog with a Disqualification must not be considered for placement in a conformation event, and must be reported to UKC.)
Unilateral or bilateral cryptorchid.
Viciousness or extreme shyness.
Bridge of muzzle decidedly convex or concave.
Overshot or undershot bite that is accentuated or disfiguring.
Dudley nose or nose partially depigmented.
Total bilateral depigmentation of the eyelids.
Bilateral cross-eyes.
Wall eyes.
No tail.
Stump tail.
Tail rolled over the back.
White on more than one-fifth of the total area of the coat.
Albinism. 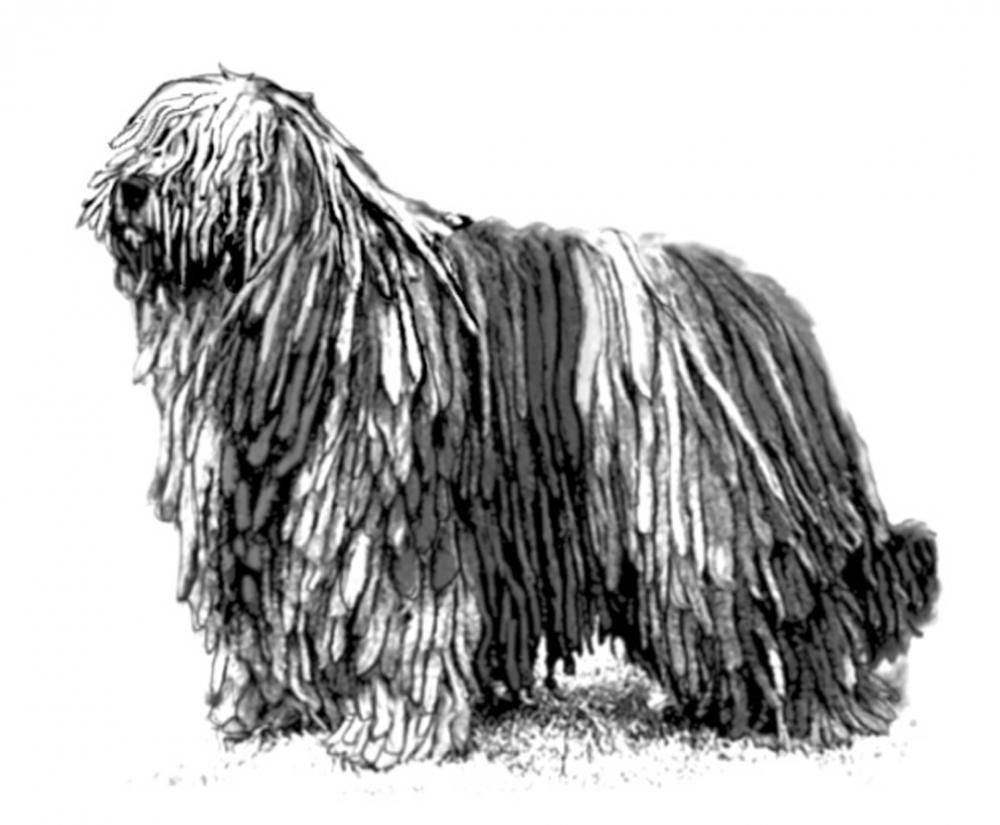