The Bedlington Terrier is thought to have originated in Cumberland County of north England sometime in the late 18th century. After being crossbred with several other terrier types and then the Whippet, their characteristic body type was set. The Bedlington was considered the gamest terrier and best vermin killer by the local miners, who are credited with developing the breed.

The Bedlington Terrier was recognized by the United Kennel Club in 1948.

The Bedlington Terrier is graceful, well balanced and lithe without any sign of coarseness, weakness or shelliness. His body style shows him to be capable of galloping for sustained periods of time.

The Bedlington is confident, intelligent and a keen hunter. He has an affectionate, dignified nature and is never shy or nervous. When at rest, the dog has a mild and gentle expression. When alert, the dog is full of immense energy and courage.

Shorter in the skull than the foreface. There is no stop; the unbroken line from the crown to the end of the nose reveals a slender head with no cheekiness or snippiness. The head is covered with a profuse topknot, the hair color of that is lighter than that of the body. The topknot is highest at the crown and tapers gradually to just back of the nose.

Narrow, but deep and rounded.

The muzzle is strong, long and tapering and is well filled up with bone beneath the eye. The lips are close fitting, with no flews. Lip pigment is black in the blue-and blue and tan-colored dogs, and brown in all other colors.

A full complement of strong, large, white teeth meet in a scissors bite.

The ears are triangular in shape, the point of greatest width being approximately three inches. They are attached low and hang flat to the cheek. When pulled forward, the ear tips reach the corners of the mouth. The ears are thin and velvety in texture and are covered with fine hair, forming a small, silky tassel at the tip.

The long, tapering neck is deep at the base and rises well from the shoulders. The head is carried high.

The shoulders are flat and sloping, with no excessive musculature.

The forelegs are lithe and muscular. They are straight and wider apart at the chest than at the feet. The long, sloping pasterns are slightly bent.

Muscular and flexible. Deep and fairly broad in chest with the brisket reaching to the elbow. Flat ribbed. Good, natural arch over the loin with a definite tuck-up. In proportion the Bedlington is slightly longer than tall.

The hind legs give the appearance of being longer than the front legs. The stifles are well angulated. The strong hocks are well let down, turning neither in nor out.

The long hare feet have thick, well-closed-up, smooth pads. Dewclaws should be removed.

Set low, thick at the base and tapering to a point. Reaches to the hock.

Distinctive stand away coat. A mixture of hard and soft hair covering the body of the mature dog. Never wiry, but having a wool-like texture. Tending to twist, especially on the head and face. When shown, the hair on the body must not exceed 1 inch in length, with the hair on the legs somewhat longer.

Acceptable colors include blue, blue and tan, sandy, sandy and tan, liver, and liver and tan. In the bi-colored dogs, the tan markings are found on the legs, chest, and underside of the tail, inside the hindquarters and over each eye. In all colors, darker body pigmentation is encouraged.

The topknots on adults are lighter than the body color. Darker colored patches from an injury are acceptable, as they are temporary.

Preferred heights, measured at the withers: dogs, 16½ inches, bitches, 15½ inches. Quality is not to be sacrificed in favor of size.

Preferred weights fall in the range of 17 to 23 pounds, proportionate to the height of the individual dogs.

The Bedlington displays a unique lightness of movement, somewhat mincing and springing in the slower gaits, and showing a slight roll when in full stride. 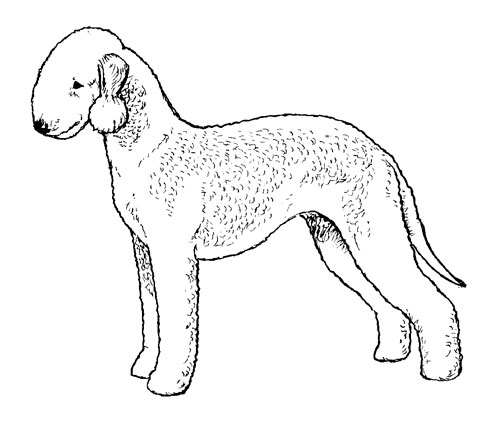