The Beauceron, or Berger de Beauce, is relatively unknown outside of its native France, although the breed is gaining popularity in the United States. It is a cousin of the Briard, and before the French Revolution both were used mainly as livestock guarding dogs. After the French Revolution, the breed developed into a herding dog. Since the French farmer was not concerned with anything but the working ability of the dogs, it wasn't until the late 19th century that a clear distinction was made between the two breeds - the long-haired variety was called the Briard, and the short-haired was called the Beauceron.

The Beauceron was recognized by the United Kennel Club on January 1, 1994.

The Beauceron is a large animal with a rustic look and a powerful, muscular build, without heaviness. Appearance emphasizes effortless movement and a direct and fearless manner.

The conformation of the Beauceron is balanced, harmoniously constructed and free from exaggeration.

The Beauceron is gentle, fearless and self-assured. He has an open and candid expression. This breed must never appear mean, timid or worried.

The head is long and well-chiseled. The width and the depth of the head are slightly less than half of its total length. There is a moderate stop that is placed equidistant from the nose to the occiput. The skull and muzzle are of equal length and their top lines should lie in approximately parallel planes.

The skull may be flat or slightly arched. The furrow between the eyes is slight. The occiput is well marked.

The muzzle is neither narrow nor pointed. In profile, the nose must be in line with the upper lip. The tight lips are always well pigmented. The upper lip should overlap the lower without any looseness. The slight flews at the corner of the mouth are always firm.

A full complement of strong, white teeth meet in a scissors bite, with the upper teeth lightly touching the lower teeth.

Disqualifications: Undershot or overshot with teeth not touching. Three or more missing teeth, not counting pre-molars.

The eyes are always dark, never being lighter than dark hazel even if the markings are light in color. The eyes are oval in shape, and set on the horizontal. Wall eyes are acceptable in the harlequin color.

The ears are set high. They may be cropped or left natural. Cropped ears are erect, never converging nor diverging, and point slightly forward.

Disqualification: Natural, uncropped ears that are carried upright and rigid.

The neck is muscular and of good length, allowing the head to be carried proudly. It blends smoothly into the shoulders.

The shoulder blades are moderately long and sloping.

The forelegs are perfectly straight when viewed from the front or from the side. The forearms are muscular.

The hindquarters are powerful and well-muscled, with angulation that matches the forequarter.

The thighs are strongly muscled. The hock joint is strong and not too close to the ground. The rear pasterns are vertical and form a well open angle with the second thigh. When viewed from behind, the rear pasterns are parallel to one another. The toes turn out slightly.

There must be double dewclaws on the inside of the hind legs. They are well defined, placed close to the foot, and distinct from one another.

Disqualification: Lack of double dewclaws on the rear legs.

Large, round and compact with hard pads and black nails.

The tail is not docked. It is carried low and straight down, reaching at least to the hock. It is in the shape of a hook at the tip.

Disqualifications: Docked tail, or a tail carried over the back.

The Beauceron is double coated, with a coarse, dense, flat lying outer coat that is approximately 1½ inches long on the body; and a fine, dense undercoat that is mouse gray and does not show through the outer coat. Coat on the head, ears and lower legs is short and fine. The hair is somewhat longer around the neck and the tail and the back of the thighs are lightly fringed.

The acceptable colors are Black and Tan and Harlequin.

The black is deep. The bright rust markings appear above the eyes; on the side of the muzzle, fading off on the cheeks and never reaching under the ear, on the chest (where two spots are preferred to solid markings across the chest); on the throat; under the tail; on the feet up to the hocks and wrist. On the limbs, the markings should become progressively narrower upwards. On the outside, they should not go higher than one-third at the leg. They will blend higher on the inside of the leg. A few white hairs on the chest are permissible.

Blue mottled with tan markings - Gray, black and tan, in a pattern of blue-gray patches evenly distributed over the body. Sometimes there is a predominance of black. The tan markings are the same as for the Black and Tan.

Disqualifications: A complete absence of tan markings. Any color other than Black and Tan or Harlequin. A visible white spot on the chest that measures more than 1 inch in diameter. In the Harlequin, an entirely gray head or a body that is gray on one side and black on the other.

The movement is supple and free, showing a long, extended stride at the trot. The head is carried somewhat low, along the line of the topline.

(An Eliminating Fault is a Fault serious enough that it eliminates the dog from obtaining any awards in a conformation event.)
Over or under the specified height.

(A dog with a Disqualification must not be considered for placement in a conformation event, and must be reported to UKC.)
Unilateral or bilateral cryptorchid.
Viciousness or extreme shyness.
Albinism.
Undershot or overshot with teeth not touching.
Three or more missing teeth, not counting pre-molars.
Yellow eyes.
Wall eyes in the Black and Tan dogs.
Split nose.
Nose other than black.
Unpigmented areas in nose.
Natural, uncropped ears that are carried upright and rigid.
Lack of double dewclaws on the rear legs.
Docked tail, or a tail carried over the back.
Shaggy coat.
A complete absence of tan markings.
Any color other than Black and Tan or Harlequin.
A visible white spot on the chest that measures more than 1 inch in diameter.
In the Harlequin, an entirely gray head or a body that is gray on one side and black on the other. 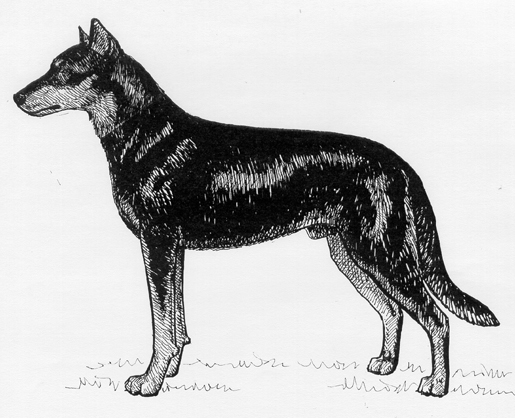