Beagle Harriers were bred in France in the 19th Century. They were bred to hunt hare or deer in packs. They could be a mixture of the Beagle and the Harrier breeds, or they could be the mid-point between the two breeds, the truth is not really known. They were recognized by the FCI in 1974. The breed is very rare.

The Beagle Harrier was recognized by the United Kennel Club January 1, 1996.

A typical small foxhound, halfway in size between the smaller Beagle and the larger Harrier.

Rather broad. No prominence of occiput. The stop is not pronounced.

Roughly equal in length to the skull. Never square; tapering without being pointed. The nasal bridge is straight, and the lips cover the lower jaw.

The Beagle Harrier has a complete set of evenly spaced, white teeth meeting in a scissors bite.

Well open, and dark in color, with a frank, lively and intelligent expression.

Set at eye level, quite short and medium broad, the ears lie flat against the skull but turn slightly at the tips, which are rounded.

The shoulders are long, oblique and muscular.

The ribs are moderately arched, and the sternum is long. The back is short, firm and muscular. The loin is strong and muscular, and may be slightly arched. There is very little tuck up.

The hips are oblique and strong.

The upper thighs are fleshy and muscular. The hocks are close to the ground, and the rear pasterns are vertical.

Set on high, long enough to reach the hock, and carried gaily in saber fashion.

Thick, not too short, and flat.

Supple, lively, and sure footed. 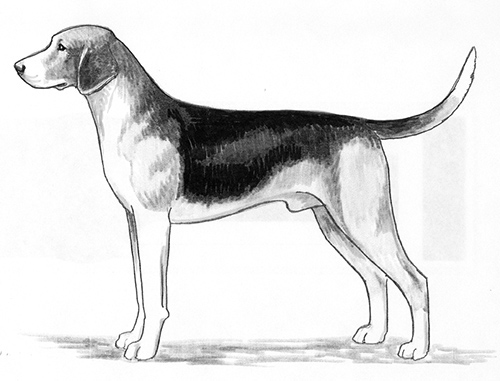