The Basset Hound originated in France, possibly as early as 1585. After the French Revolution, the breed again rose in popularity among the peasants. Before the Revolution, hunting hounds were used only by the nobility. The peasants could not hunt from horseback, only on foot, so they required a shorter-legged, slower hound. The Basset Hound was also ideal for hunting in heavy cover due to its shape and size.

The breed found its way to England in the 1860's, the initial dogs were gifts from Comte de Tuornow to Lord Galway.

The Basset Hound was recognized by the United Kennel Club in 1928.

A short-legged, long-bodied, well-balanced hound of considerable substance. Legs are short, but with enough length to afford proper movement at all times. Bone is heavy in relation to the size of the dog, but movement is not compromised and is not clumsy. Any good hound color is acceptable. The coat is short, close and smooth, and a certain amount of loose skin is desirable. There must be adequate clearance between the lowest part of the chest and ground to allow the dog to move freely over all types of terrain.

This is a working hound and therefore must be strong, active, and capable of great endurance in the field.

Serious Fault: Dewlap so exaggerated or excessive as to appear “sloppy”, which would be a detriment in the field. Excessive wrinkles. Overweight.
Disqualifications: Unilateral or bilateral cryptorchid.

The Basset is a tenacious hunting hound of ancient lineage. It hunts by scent, and has a pack instinct, and a deep, melodious voice. The breed is capable of great endurance. It is friendly and affectionate, never aggressive or timid.

The head is large, lean and well proportioned. The skin over the entire head is loose and it is wrinkled over the brow and beside the eyes when the head is lowered but not so much as to impede its health or performance.

The muzzle is lean and deep; never snipey. The flews of the upper lip overlap the lower substantially. The top of the muzzle is nearly parallel, with a line from the stop to the occiput.

The eyes are brown, but they may be hazel in light-colored hounds. The eyes are lozenge-shaped, and neither too prominent nor too deep. The expression is calm and serious, and the third eyelid is visible, but not excessively.

Entirely black, except in light-colored hounds, where it may be brown or liver. Large, wide-opened nostrils may protrude a bit over the lips.

The ears are set low on the skull, just below the line of the eye. They are long, reaching beyond the end of the nose when pulled forward. They are thin and velvety in texture; narrow and curl inward.

Muscular, well arched and fairly long, with a slight dewlap.

The shoulder blades are well laid back. The shoulders are not heavy. The elbows fit neatly into the sides. There are wrinkles of skin on the lower legs.

The forelegs are short and powerful, and heavy in bone. Skin may be slightly wrinkled. The forearms incline inward slightly, but not so much as to prevent free action or result in the legs touching each other when standing or in action. Dewclaws may be removed.

The body is long and deep throughout its length. The withers and the hindquarters are approximately the same height. The chest fits neatly into the crook of the forearm when seen from the front. The breastbone is prominent, and the chest is neither narrow nor unduly deep. The topline is straight and level, and the back is fairly broad. The loin may arch slightly.

Serious Faults: Roach back. Sagging back. Slackness of loin. Flatsidedness.

The hindquarters are full of muscle, standing out well and rounded. Approximately equal to the shoulders in width.

The stifles are well bent. Wrinkles of skin may appear between the hock joint and the foot, and at the back of the hock joint there might be a slight pouch resulting from loose skin. The hocks are well let down and slightly bent under, but turn neither in nor out and are just under the body when standing naturally.

Massive, well-knuckled and well-rounded; with tough, heavy pads. The front feet may turn slightly out or point straight ahead, but in any case the hound always stands true, with the weight equally distributed so the toes and pads all touch the ground.

Well set and rather long, strong at the base and tapering towards the end. It appears to be a continuation of the spine, but with a slight curve. It is carried well up and in saber fashion, never curled over the back.

Smooth, close and hard with sufficient density for protection. The skin is loose and elastic while remaining free from exaggeration.

Generally black, tan and white, or lemon and white, but any good hound color is acceptable. The distribution of color and markings is not important.

Serious Fault: Over 15 inches in height.

The gait of the Basset Hound is a most important feature. It must be smooth, free and true, with good reach in front and strong thrust from behind. The hocks and stifles should never be stiff, and no toes should drag on the ground.

(A dog with an Eliminating Fault is not to be considered for placement in a bench show/conformation event, nor are they to be reported to UKC.)
Knuckling over on front legs.

(A dog with a Disqualification must not be considered for placement in a conformation event, and must be reported to UKC.)
Unilateral or bilateral cryptorchid.
Viciousness or extreme shyness.
Albinism.
Entropionism, ectropionism. 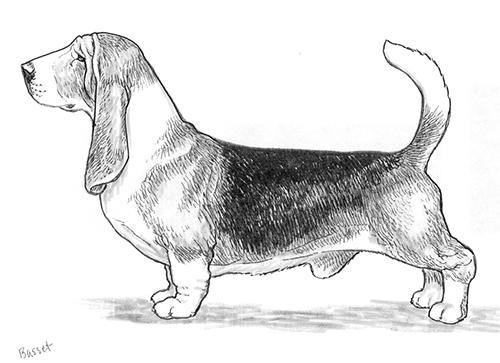