The Basset Fauve de Bretagne originated in France for use as a scenting hound on rabbit, hare, fox, roe deer and wild boar. It is a descendant of the larger Griffon Fauve de Bretagne. The breed has been popular as a hunter in its native region since the 19th Century, and earned a national reputation as an outstanding rabbit hound during the latter part of the 20th Century.

The Basset Fauve de Bretagne was recognized by the United Kennel Club on January 1, 1996.

A small, stocky hound, rectangular in shape, the Basset Fauve de Bretagne is rough coated and fawn in color. It is a very hardy breed, energetic and fast for its size.

Smart, courageous and determined, the Basset Fauve de Bretagne is a serious hunter, easily adapting to different types of game or terrain. It is also an excellent companion, being cheerful, friendly and agreeable.

Rather long, and broadest between the ears, tapering in width to the eyes. Slightly flattened on top, arched on the sides. Stop is moderate, but a little more than in the Griffon Fauve de Bretagne.

Same length as the skull, tapering slightly in width from the stop to the nose. Lips well cover the lower jaw, but there is no excess of flew. Hair covering (moustache) is moderate.

Strong teeth meet in a tight scissors bite. The absence of the first premolars is not faulted.

Set well into the skull, neither prominent nor too deep, with no haw visible. Dark brown in color. Expression is lively. Rims are fully pigmented.

Drop ears are set low, on a line with the eye. When pulled forward, they reach just to the end of the nose. The ears taper to a point at the end and turn inwards. They are covered with shorter, softer hair than that on the rest of the dog.

Rather short and well-muscled. No dewlap.

Legs have good bone. Elbows are held close to the body. Legs are preferably straight from elbow to foot, but a slight curve in the forearm is allowed. Pasterns slope slightly. Distance from elbow to ground is slightly less than distance from withers to elbow.

Deep and broad, with moderately rounded ribcage. Back is rather short for a Basset, broad, strong and level. Loin is wide and muscular with little tuck-up.

Well muscled, with long thighs. Moderate angulation matches that of the forequarter.

When viewed from behind, legs are straight and parallel from hip to foot. Rear pastern is short and vertical.

Medium in length, strong at the base, tapering to a point. Carried above the line of the back in sickle shape with side to side action.

The coat is very rough, harsh and not too long. Moderate facial furnishings. Skin is thick and supple.

Various shades of fawn, from golden wheaten to brick red. A few black hairs on the ears or the back are acceptable but not desirable, as is a small white spot on the chest.

For both males and females, acceptable height is from 12.5 inches to 15.5 inches, with a minor variation up or down acceptable for otherwise outstanding specimens.

(An Eliminating Fault is a Fault serious enough that it eliminates the dog from obtaining any awards in a conformation event.)
Characteristics: aggressiveness or overt shyness.
Teeth: jaws overshot or undershot.
Head: totally or partially unpigmented areas on nose, eye rims or lips. Extremely light eyes. Forequarters: excessive crook in the foreleg.
Feet: presence of dewclaws on the hind legs. Tail: kinked tail.
Coat: long or woolly coat, or any coat not described by the standard. Height: more than one inch over or under the specified size. 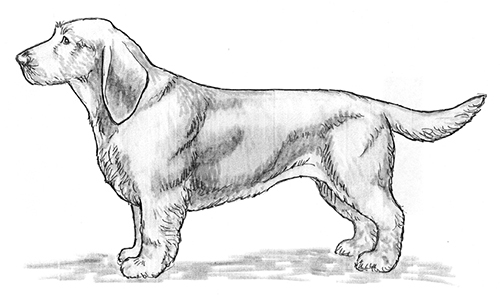