The Basset Bleu de Gascogne was recognized by the United Kennel Club in January 1991.

The first and immediate impression of a Basset Bleu de Gascogne should be that of a hound with substance and staying power. Rather large, but not too heavy. A Basset (low-slung) hound of superior type, denoting great ancestry, reflecting in both form and action, the extreme physical and hunting characteristics of its ancient stem. Every point of the Basset Bleu de Gascogne is for a purpose relevant to preserving the breed and its uniqueness. Judges are asked to keep this fact in mind when evaluating the merits of an individual hound.

Active, agile and lively with a fine nose and strong hunting ability, excellent in a pack or on his own. Affectionate and happy.

Slightly domed and not too wide. The occiput is well pronounced. The stop is hardly accentuated. The cheeks are lean and may show one or two folds of skin.

As long as the skull and slightly aquiline. The lips are ample without exaggeration, giving the front part of the muzzle a square profile.

Oval in shape, deep set and brown in color. The expression is gentle and slightly sad.

Set on low and leaving the skull well. Long, fine and curling, coming at least to the end of the muzzle, and ending in a point.

Faults: Ears that are set high, broad, thick or round.

Rather long and arched, with dewlap showing, but without excess.

The shoulders are oblique and well muscled without heaviness.

Strong, straight or with a slight crook. The elbows are very close to the body.

Faults: Straight shoulders. Out at the elbows. Crooked pasterns. Knuckling over.
Disqualification: Front legs with more than a semi-crook.

The body is longer than it is tall in a ratio of 8:5. The depth of the chest is two-thirds the height at the withers. The chest is roomy and long, extending below the elbows. The sternum is prominent and the ribs are well sprung. The back is long and well supported. The loin is short and sometimes arched, and the croup is slightly sloping. The body is deep at the flank.

Seen from behind, a vertical line will pass from the point of the buttocks through the middle of the leg, the hock joint, the rear pastern and the foot.

The thighs are long and muscular. The hock joint is large and slightly bent. The rear pasterns are short.

A slightly elongated oval, with lean, tight toes and black pads and nails.

Well attached, strong at the set on, and carried in saber fashion.

Black or white, but never completely white, but strongly speckled with black dots. The palate, lips, genitals and the soles of the feet are black.

Fault: Fine, smooth coat.
Disqualification: Any coat other than described.

Entirely black and white mottled, giving a slate blue effect, with or without black patches. Generally there are black patches on either side of the head that cover the ears, surround the eyes and stop at the cheeks. There is a white blaze in the middle of the skull which usually has a breed typical oval shaped black spot in its center. There are tan markings above the eyes, on the cheeks, lips, inside of the ears, on the legs and under the tail.

Fault: Pale tan.
Disqualification: Any color other than described.

Because the Basset Bleu de Gascogne is first and foremost a hunting hound, scars, the result of honorable wounds, shall not be considered faults, nor shall they be penalized by Judges. This includes cuts, nicks, notches on the ears, and/or ears that are frayed at the edges from working in brush, tall grass, etc.

(A dog with a Disqualification must not be considered for placement in a conformation event, and must be reported to UKC.)
Bilateral or unilateral cryptorchid.
Viciousness or extreme shyness.
Albinism.
Any color other than described.
Undershot or overshot bite.
Front legs with more than a semi-crook.
Lack of type.
Serious anatomical malformations that cause a disabling effect.
Any coat other than described. 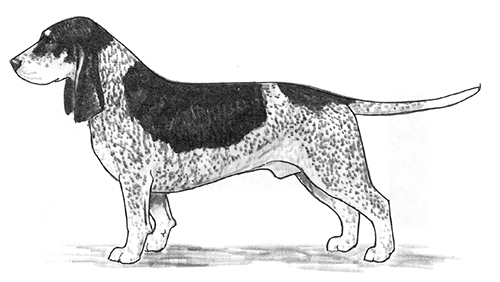