A group of serious French breeders formed a breed society to combine the Normand (from Normandy) and Artesien (from Artois) Bassets strains, merging them to develop the one breed that we have today. Although the breed has been streamlined from the original cumbersome, unwieldy dog, some people feel that this resulted in a lack of stamina and hound voice. No one can argue, however, that the resulting Basset Artesien Normand has a good temperament and is an energetic extrovert. The appealing nature of the breed makes them attractive to pet homes and families. Dedicated breeders strive to maintain the hunting instincts of the breed.

The Basset Artesien Normand was recognized by the United Kennel Club on January 1, 1995.

The B.A.N. (as it is often referred to), is a well-made, long dog, with the ratio of length of body to height at withers being about 8:5. It stands firm and balanced. It is a sound breed, and moves well, with great gaiety. Because the Basset Artesien Normand is first and foremost a hunting hound, scars (the result of honorable wounds) shall not be considered faults nor shall they be penalized by Judges. This includes cuts, nicks, notches on the ears, and/or ears that are frayed at the edges from working in brush, tall grass, etc. Hounds lacking in substance should be penalized.

The breed is extremely intelligent and full of energy. They are eager to please and are generally obedient. All parts of this dog indicate a long history of pure breeding and adherence to the standard.

The width of the skull is approximately equal to half the length of the entire head. The skull is domed shaped, and dry in appearance, with a prominent occiput. The stop is marked but not exaggerated.

The muzzle is approximately the same length as the skull and slightly aquiline. The upper lips well cover the lower lips without being too pendulous.

The nose is black and wide, coming a little over the lips. The nostrils are well open.

The large, dark oval shaped eyes have a calm, serious expression. A haw may be present.

The ears are set as low as possible, never above the line of the eye. They are supple, very fine and delicate in texture. They are narrow where attached to the skull, and curl well inward in the characteristic corkscrew fashion. The ears are very long and preferably have pointed ends.

The neck is fairly long. There may be a dewlap, but it should never be exaggerated.

The shoulders are muscular and oblique. Some folds of skin, without exaggeration, on the pasterns are considered a quality.

The short forelegs are heavy boned. They are half crooked or a little less than half crooked, providing there is a sufficient principle of crook present. The elbows are close to the body.

The chest is oval in shape, with a long sternum that is prominent in front and carries well back. The brisket is well developed and descends distinctly below the elbows.

The wide, well-supported back is straight and level. The loins are slightly tucked up. The full flanks extend downward. The croup is slightly slanted.

The thighs are well developed, fleshy and muscular.

The hind legs are short, corresponding in balance to the forelegs. The strong hocks are relatively bent, which places the hind foot slightly under the dog when he is at rest. A small pouch of skin at the point of the hock is not a fault. The rear pasterns are short and strong.

The feet are oval in shape and a little elongated. The toes are rather close and placed firmly on the ground for maximum support.

The tail is quite long, thick at the base, and tapering toward the end. At rest, the tip must just touch the ground. The tail is carried in saber fashion but never falling on the back. It must not have a plume and the hair on the tail may never be trimmed.

The coat is short, close and smooth, without being too fine. The skin is supple and fine.

Tri-color or fawn and white. In the tri-color, the head should be largely covered with tan hair, and show a circle of darker hairs on the temples. The black blanket or patches should be comprised of solid black hairs or black hair with ‘grizzle’.

Disqualification: Too much black mottling in the white, giving it a bluish tint.

The acceptable height range for males and females is 12 to 14 inches, with a slight tolerance in either direction for exceptional individuals.

Even, effortless and steady.

(A dog with a Disqualification must not be considered for placement in a conformation event, and must be reported to UKC.)
Unilateral or bilateral cryptorchid.
Viciousness or extreme shyness.
Albinism.
Undershot or overshot bite.
Completely straight forelegs.
Albinism.
Too much black mottling in the white, giving it a bluish tint. 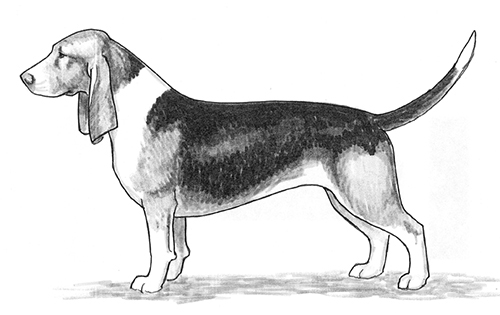