The Basenji is a small, short-haired hunting dog that originated in the Zaire region of Africa. They are also often referred to as the "Congo Dog". The breed stems from the very earliest pariah-type dogs, being used as hunting dogs as long ago as 3600 B.C.

The breed has maintained its original form for centuries, and was "rediscovered" in the Congo around 1936, when a few specimens of the breed were imported to England.

The Basenji was recognized by the United Kennel Club in 1948.

The Basenji is a lightly built, short-backed dog, appearing high on the leg in comparison to its length. It has a wrinkled head that is carried proudly upon a well-arched neck. The tail is set high and is curled. The dog conveys an elegant and graceful appearance; its whole demeanor is one of poise and inquiring alertness. Its balanced structure and smooth musculature enable it to move with ease and agility. Its wrinkled forehead, tightly curled tail and swift, effortless gait (which resembles a racehorse trotting at full speed), are breed typical. The breed is exceptionally clean.

The Basenji is a hound, equipped with sharp eyesight and a remarkable scenting ability, which hunts by using both sight and scent. This breed should not bark, but it is not mute. It does growl and yodel. The Basenji is alert, intelligent and independent; affectionate to its "family". The breed is characteristically aloof with strangers and protective of its territory. It is not well-suited for structured obedience work.

The head is carried proudly.

The skull is flat, well-chiseled, and of medium width; and tapers toward the eyes. There is a slight stop. Fine, profuse wrinkles, a breed characteristic, appear on the forehead when the ears are erect. Side wrinkles are desirable, but are not exaggerated into a dewlap. The wrinkles are most noticeable in puppies. Because of the lack of shadowing in blacks, tricolors and brindles, the wrinkles are less noticeable.

The foreface tapers from the eye to the muzzle. The muzzle is shorter than the skull, with rounded cushions.

A full complement of strong, white, even teeth meet in a scissors bite.

The eyes are dark in color. They are almond-shaped, obliquely set and far-seeing, with a rather inscrutable expression. The eye rims are dark.

A black nose is greatly desired.

The ears are small, erect, of fine texture and slightly hooded. They are set well forward on top of the head.

The well-crested neck is of good length, is slightly full at the base of the throat and is well set into the shoulders, giving the head a high carriage.

The shoulders are well laid back, the shoulder blade and upper arm being of approximately equal length. They are muscular, but not loaded. The elbows are tucked firmly against the brisket.

Legs are straight, with clean, fine bone. The forearm is long, with well-defined sinews. The strong, flexible pasterns are of good length.

The body is square and short coupled. The back is short and level. The oval ribs are well sprung, and reach down to the elbows. The chest is deep and the underline runs up into a definite waist.

The strong and muscular hindquarters are of medium width.

The hocks are well let down and turned neither in nor out. The second thighs are long and the stifles are moderately bent.

The tail is set high on the topline. It bends acutely forward and lies, well-curled (in a single or double curl), over to either side, close to the thigh.

The coat is short and fine. The skin is very pliant.

Color and markings should be rich, clear and well-defined, with a distinct line of demarcation between the black and red of tricolors and the stripes of brindles.

Ideal height for males is 17 inches. Ideal height for females is 16 inches. The breed is lightly built, considering the height to weight ratio. Approximate weights are: males, 24 pounds; females, 21 pounds.

The breed exhibits a swift, tireless trot, during which the topline remains level. The stride is long, smooth and effortless. Coming and going, the straight column of bones from the shoulder joint to foot, and from the hip joint to the pad, remains unbroken. As speed increases, the dogs single track.

Any departures from the above standard are to be considered faults. The seriousness of the fault is determined by the degree of deviation from the standard. The Basenji is a hunting dog, and all physical characteristics relative to that purpose are to be maintained. 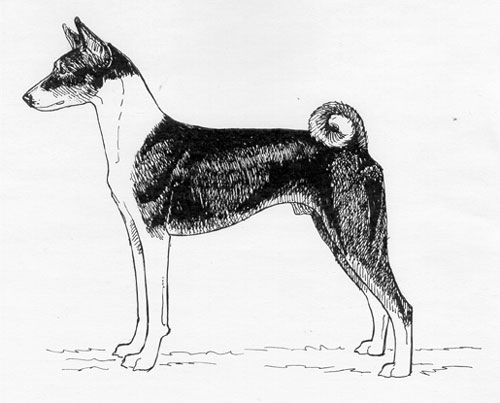