The Austrian Pinscher descends from the ancient Austrian country pinschers that were still widespread in the second half of the 19th century and used as versatile farm dogs. Pure breeding of this breed began in 1921.

The Austrian Pinscher was recognized by the United Kennel Club in 2006.

A stocky, short coated dog of medium size, with a bright expression.

Assertive, lively and alert, the breed is devoted to people it is familiar with and suspicious of strangers, making it a useful guard dog.

The head is pear shaped.

The skull is broad and rounded, with a pronounced frontal furrow and groove. The zygomatic arches are distinctly developed, and the stop is well marked.

The muzzle is slightly shorter than the skull, strong, with a straight nasal bridge. The lips are tight and smooth, with dark pigmentation.

The Austrian Pinscher has a complete set of evenly spaced, white teeth meeting in a scissors bite.

Large and round, with close fitting, dark rims.

The shoulder blades and upper arms are long and well laid back.

The legs are straight and well muscled, with strong bone and slightly sloping pasterns.

In proportion, the body is slightly longer than tall. The chest is long, deep, broad and barrel shaped, with a well developed forechest. The withers are well defined, and the back is short, broad and straight. The loin is short and broad, and the croup is long and broad. The belly is slightly tucked up.

The upper thighs are broad. The hocks are strong, and the rear pasterns are short.

The feet are close knit, with strong nails.

Russet gold, brownish yellow, stag red, or black. with tan markings. White markings are allowed on the chest, muzzle, neck, throat, nape, feet and tip of tail. Lack of white markings is not a fault.

(A dog with a Disqualification must not be considered for placement in a conformation event, and must be reported to UKC.)
Unilateral or bilateral cryptorchid.
Viciousness or extreme shyness.
Albinism.
Undershot or overshot bite. 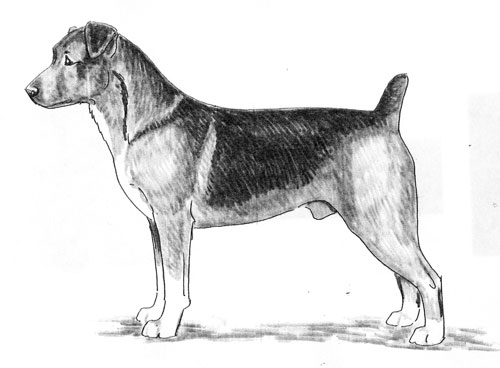