The Australian Kelpie originated around 1870 and played a major role in the development of the sheep and wool industry in Australia. Descended from the British and Scottish "working Collies" (an origin shared with the Border and Scotch Collies and the English Shepherd), the Kelpie was developed to handle the harsh, hot landscape, extensive acreage and unruly Merino sheep on Australian stations.

The Kelpie is a gathering style dog, using eye, bark and bite (grip) to move stock, as conditions warrant. In the Australian bush, Kelpies often worked unsupervised, relying on their own wits to find and gather livestock. Kelpies are keen and active dogs, always ready to work.

The foundation of the Australian Kelpie breed came from the Scottish Rutherford, or North Country strain, of working collies. This included smooth-haired, prick or semi-prick eared dogs, which were black and tan in color. The foundation female was born from an imported pair owned by a Mr. George Robertson of Victoria, Australia. This female came into the possession of J.D. Gleeson, who named her "Kelpie." Mr. Gleeson's friend, Mark Tully, had an outstanding black dog named "Moss", bred from imported Rutherford stock. Kelpie was mated to Moss and produced an extremely good line of working sheepdogs.

Two other imported black and tan dogs named Brutus and Jenny were also mated, and their pup, Caesar, was later mated back to Kelpie. From this litter came a black and tan female, also named Kelpie, who went to Mr. C.W. King and later made the Kelpie name a household word by winning the Forbes Sheepdog Trial. Stockmen everywhere wanted a "Kelpie" pup. By the 1890's the "Kelpie” as a strain was well established.

The Australian Kelpie is primarily imported and bred by ranchers and farmers for use as a working stock dog. Australian Kelpies in the United States are used on all types of livestock, on large and small operations. They are also entered in various herding trials, as well as participating in Obedience and Agility.

The general appearance shall be that of a lithe, active dog showing hard, muscular condition, and conveying the capability of untiring work. It must give the impression of suppleness, and be free from any suggestion of weediness.

The Kelpie is extremely alert, eager and highly intelligent, with a mild, tractable disposition, marked loyalty and devotion to duty. It has a natural instinct and aptitude in the working of livestock, both in a confined area and in open country. An open, friendly, alert but placid disposition is essential, with a good balance between keenness to work and ability to rest.

The head is in proportion to the size of the dog.

The skull is slightly rounded and broad between the ears. The forehead remains straight in profile to a pronounced stop. The cheeks are not coarse or prominent, but round to the foreface.

The muzzle is cleanly chiseled and defined. It is slightly shorter than the skull, with tight, clean lips.

The teeth should be a full complement of strong, white, evenly spaced teeth meeting in a scissors bite. Dogs displaying broken or extracted teeth due to herding injuries should not be penalized.

The eyes should be almond shaped, of medium size and widely spaced; clearly defined at the corners. The color of the eye should be brown, harmonizing with the color of the coat. In the case of blue (gray) dogs, a lighter-colored eye is acceptable. Expression should be intelligent and eager and is somewhat fox-like.

The ears should be widely-spaced, pricked, and running to a fine point at the tip; inclining outward and slightly curved on the outer edge and of moderate size. The ear leather is fine, but strong at the base.

The neck should be of moderate length, strong and slightly arched, gradually molding into the shoulders. It is free from throatiness, and has a fair amount of ruff.

The shoulders should be clean, muscular and well sloping, with close-set withers, the upper arm forming a right angle with the shoulder blade. The elbows set parallel to the body.

Straight and parallel when viewed from the front, with strong but refined bone and good musculature. The pasterns should slope slightly for flexibility.

The length of the dog from the point of the breastbone, in a straight line to the buttocks, should be greater than the height at the withers, as 10 is to 9. The chest is deep rather than wide and the ribs are well-sprung. The topline is firm and level. The loin is well-muscled, with good depth at the flank.

These should show breadth and strength. The rump should be rather long and sloping, the upper thigh set into the hip socket at the pelvis at a corresponding angle to the shoulder blade.

The stifles should be well turned, and the hocks fairly well let down. Viewed from behind, the rear pasterns should be parallel.

Round and strong, with deep pads, and tight, well-arched toes. Nails are strong and short.

Set on to follow the natural line of the sloping croup, the tail should be long enough to reach nearly to the hock. At rest, it hangs in a very slight curve. During movement or excitement it may be raised, but it should never be carrier higher than horizontally. It should be furnished with a good brush.

The outer coat should be moderately short, flat, hard, straight and weather resisting, with dense undercoat. On the head, ears, feet and front of the legs, the hair should be short. The coat can be longer at the neck, showing a ruff; and at the rear of the thighs, forming mild breeching; the hair on the tail sufficient to form a brush.

Minimal white markings such as a spot, strip, or at most, a blaze on the chest are acceptable. White stockings are a serious fault.

It is essential that the Kelpie be perfectly sound, both in construction and movement. The gait should be smooth, free and tireless with the tendency to single track becoming more pronounced as speed increases. There must be ability to turn suddenly at speed, and the capability of crouching, stealthy movement demanded by its work. Any tendency to cow hocks, bow hocks, stiltedness, loose shoulders, restricted movement, weaving or plaiting is a serious fault. 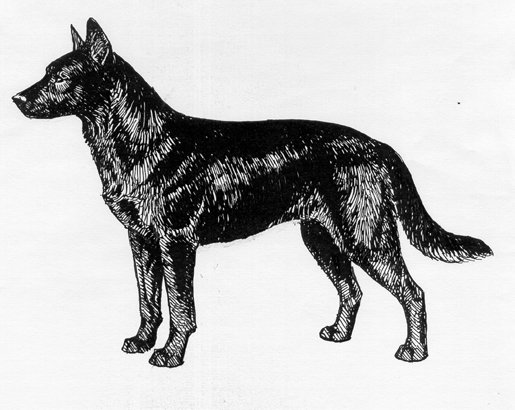