The breed came into being in Australia. It took many crosses of various breeds to produce this tough, versatile herding dog. Crosses were made with the wild native Dingo, Bull Terrier, Dalmatian, blue merle Collies and the Kelpie. The breed is born white, which is an oddity inherited from the Dalmatian. The breed has been pure since 1893. It is a silent heeler and is able to withstand the heat better than any other herding breed. The breed has also been known as the Australian Queensland Heeler, Blue Heeler and Red Heeler.

The Australian Cattle Dog was recognized by the United Kennel Club in 1985.

A medium-sized, blue or red speckled dog that is strong, compact and symmetrically built. The breed conveys the impression of great agility and the capacity for endurance, and any tendency to being either overdone or weedy should be seriously faulted.

Working dogs are not to be penalized under any conditions for scars or blemishes that are due to occupational injuries.

Loyal and protective, the Cattle Dog is an outstanding guardian. The breed is naturally suspicious of strangers but must be amenable to being handled in the show ring.

The head is wedge-shaped and in balance with the other proportions of the dog and in keeping with its general conformation.

The skull is broad and slightly curved between the ears, flattening to a slight but definite stop. The cheeks are muscular but not prominent.

The foreface is broad and well filled in under the eyes, tapering gradually to a medium-length, deep, powerful muzzle. The topline of the muzzle lies in a plane that is parallel to the topline of the skull. The lips are tight and clean.

Oval shaped and of medium size, neither prominent nor sunken. Must express alertness and intelligence. Eye color is dark brown.

Black, regardless of the coat color.

Should be of moderate size. Preferably smaller than large, broad at the base, muscular, pricked and moderately pointed. Ears set wide apart on the skull, inclined outwards, sensitive in their use and firmly erect. The leather should be thick, and the inside of the ear should be fairly well-furnished with hair.

The neck is of exceptional strength, muscular, and of medium length, broadening to blend into the body, and free from throatiness.

The shoulder blades are muscular, sloping and well-angulated with the upper arm. The blades should not be too close together at the tips. While the front assembly is muscular, overly heavy or loaded shoulders will hamper working ability and should be penalized.

Straight and parallel when viewed from the front, with strong, round bone that continues straight to the foot. The pasterns should show some flexibility.

The length of the body, from the point of the breastbone to the buttocks, is greater than the height at the withers as 10 is to 9. The topline is level, back strong, with ribs well sprung, not barrel-chested. The chest is deep, muscular and moderately broad. The loins are broad, deep and muscular with deep flanks; showing strength joining the fore and hindquarters. The croup is slightly sloping, broad, strong and muscular with very little tuck-up.

The upper thigh is long, broad and well developed. The lower thigh is long and well muscled. There is good angulation at the stifle. The hocks are strong and well let down. When viewed from the rear, the hind legs are parallel, neither too close nor too far apart.

The feet should be round, with short, strong, well-arched toes that are held close together. The pads are hard, deep and strong. Dewclaws are found only on the front legs and may be removed.

Low set, following the slope of the croup. At rest, it hangs in a slight curve and reaches the hock. The hair on the tail is furnished sufficiently to form a good brush. The tail is customarily not docked, however, a docked tail should not be penalized.

Fault: A gay tail (carried above the horizontal).

The weather-resistant outer coat is moderately short, straight, hard and flat lying. There is a short, dense undercoat. Under the body the coat is longer, and it forms slight breeching on the backs of the thighs. Along the neck it is thicker and longer. On the head, front of legs and feet the coat is short. On an average, the body coat should be 1 to 1½ inches in length.

Faults: Coat either shorter or longer than described.

The color should be blue, blue mottled or blue speckled with or without other markings. The permissible markings are black, blue or tan markings on the head, evenly distributed for preference. The forelegs tan midway up the legs and extending up the front to breast and throat, with tan on jaws; the hindquarters tan on inside of hind legs, and inside of thighs, showing down the front and the stifles and broadening out to the outside of the hind legs from hocks to toes. Tan undercoat is permissible on the body providing it does not show through the blue outer coat. Black markings on the body are not desirable.

The action is true, free, supple and tireless. The movement, front and rear, should be in unison. As speed increases, the feet converge toward a center line of travel. Soundness is of paramount importance. Capability of quick, sudden movement is essential.

A dog with a Disqualification must not be considered for placement in a conformation event, and must be reported to UKC.
Unilateral or bilateral cryptorchid.
Viciousness or extreme shyness.
Albinism. 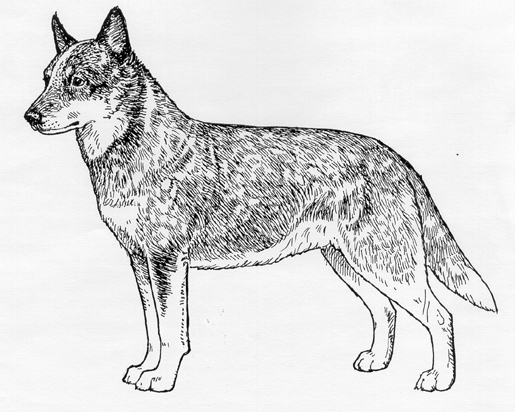