The Atlas dog has existed for many centuries in the mountains and on the plateaus of North Africa. It can currently be found in large numbers in the mountains of Morocco, where it is used by the semi-nomadic people of the mountainous regions as a guard dog. The breed has never been used in the traditional flock herding sense.

The Atlas Mountain Dog was recognized by the United Kennel Club July 1, 2006.

Solid and powerful, yet sinewy and never cumbersome, the Atlas Mountain Dog possesses a thick, bushy coat that protects it from sun and cold and provides a protective armor in the fights that it must engage in with predators.

Always alert and very instinctive in assessing the threat of danger, the Atlas dog has inherent guarding and protective behavior. The breed is very docile and affectionate with its family.

Strong, broad and conical in shape, with no wrinkles. The cheekbones are not chiseled, and there is no indention on the sides of the head at the juncture of the skull and muzzle. The stop is slight and sloping.

Flat and broad, as long as it is wide. There is a slight frontal groove and the occipital bone is not prominent.

Shorter than the skull, with thin, tight pigmented lips that are black or brown depending on the color of the coat.

The Atlas Mountain Dog has a complete set of evenly spaced, white teeth meeting ideally in a level bite. Scissors or reverse scissors, without loss of contact, are acceptable.

Broad with open nostrils. Fully pigmented, either black or brown depending on the color of the coat.

Moderate size and varying in color from amber through brown depending on the color of the coat. Expression is very direct.

Medium length with slightly rounded tips, set on the side of the head and carried semi-prick. May be thrown back in the ruff when in repose.

Well muscled and free of throatiness.

Angulation of the shoulder blade and upper arm is approximately 100 degrees.

Straight and solid with moderate muscle and short, nearly vertical pasterns. Length of leg from elbow to ground is one-half the height at the withers.

Longer than tall in a ratio of 10:9. The chest is deep, reaching at least to the elbow, and only moderate in width. The back is broad and well muscled, of reasonable length, and the topline must show a slight dip behind the withers, without being sway backed. The loin is slightly arched and the croup slopes gently. The underline is gently tucked up but without exaggeration.

The angles at the stifle and hock are obtuse, which raises the croup and gives the dip behind the withers.

The thighs are well muscled.

Practically round, with solid pads and nails that are black or brown depending on the coat color.

Set on low and reaching at least to the hock joint, the tail is carried low in repose but much more gaily when the dog is on the move, however it should never be permanently curled over the back. The richness of the tail plume denotes pure breeding.

Disqualifications: Tail permanently curled over the back. Lack of tail plume.

Thick and rather harsh except on the face and ears where it is short and fine. Moderate length on the body, with a distinct mane, especially in males, and long breeches and tail plume.

Extremely variable.
Black.
Fawn - ranging from pale sand to deep red, with or without sable or brindle markings.
Brown - ranging from beige to deep, dark brown, with the lighter shades sometimes mantled in deep brown.

All of these colors may be spotted with white to any degree.

Ideal height at the withers for both males and females is from 20½ inches to 24½ inches.

A tireless, single tracking trot, with reasonable reach and the feet kept close to the ground.

(A dog with a Disqualification must not be considered for placement in a conformation event, and must be reported to UKC.)
Unilateral or bilateral cryptorchid.
Viciousness or extreme shyness.
Albinism.
Tail permanently curled over the back.
Lack of tail plume.
Undershot or overshot without contact.
Prick ears.
Bird of prey eye.
Harlequin, blue or Isabella.
Distinctly short coat. 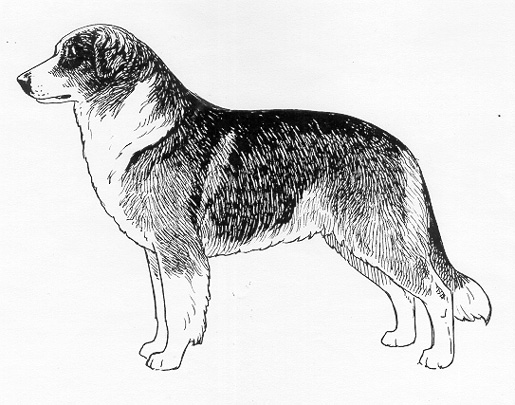 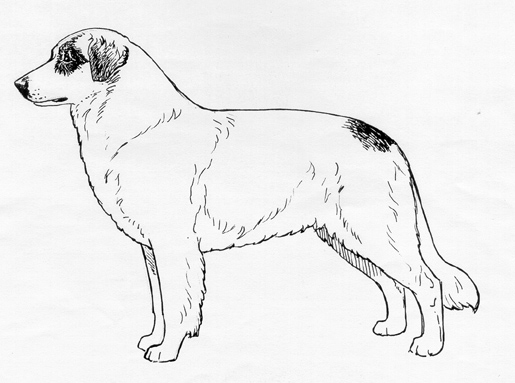