Competition Coonhound History & What It Means for the TOC

67 years, 6 months, and 14 days ago UKC held their first official licensed nite hunt. The license was issued, by then CEO Dr. Fuhrman, to a collaboration of three clubs: the Clay County Sportsmens Club, the Jasper County Coonhunters Association, and the Illinois Coonhound Breeders Association.

That first UKC licensed nite hunt was held on the weekend of September 18 & 19, 1953 in Ingraham, Illinois. Records indicate that first hunt drew a whopping 33 entries. The points system used had hunting worth 15, strikes 15, trailing 15, treeing 15, holding the tree 15, and then five points for, get this, "handler obedience, dog obedience, hound voice, watering, and fencing." There would be 15 demerit points awarded for a false trail and babbling, and 30 points for a false tree. 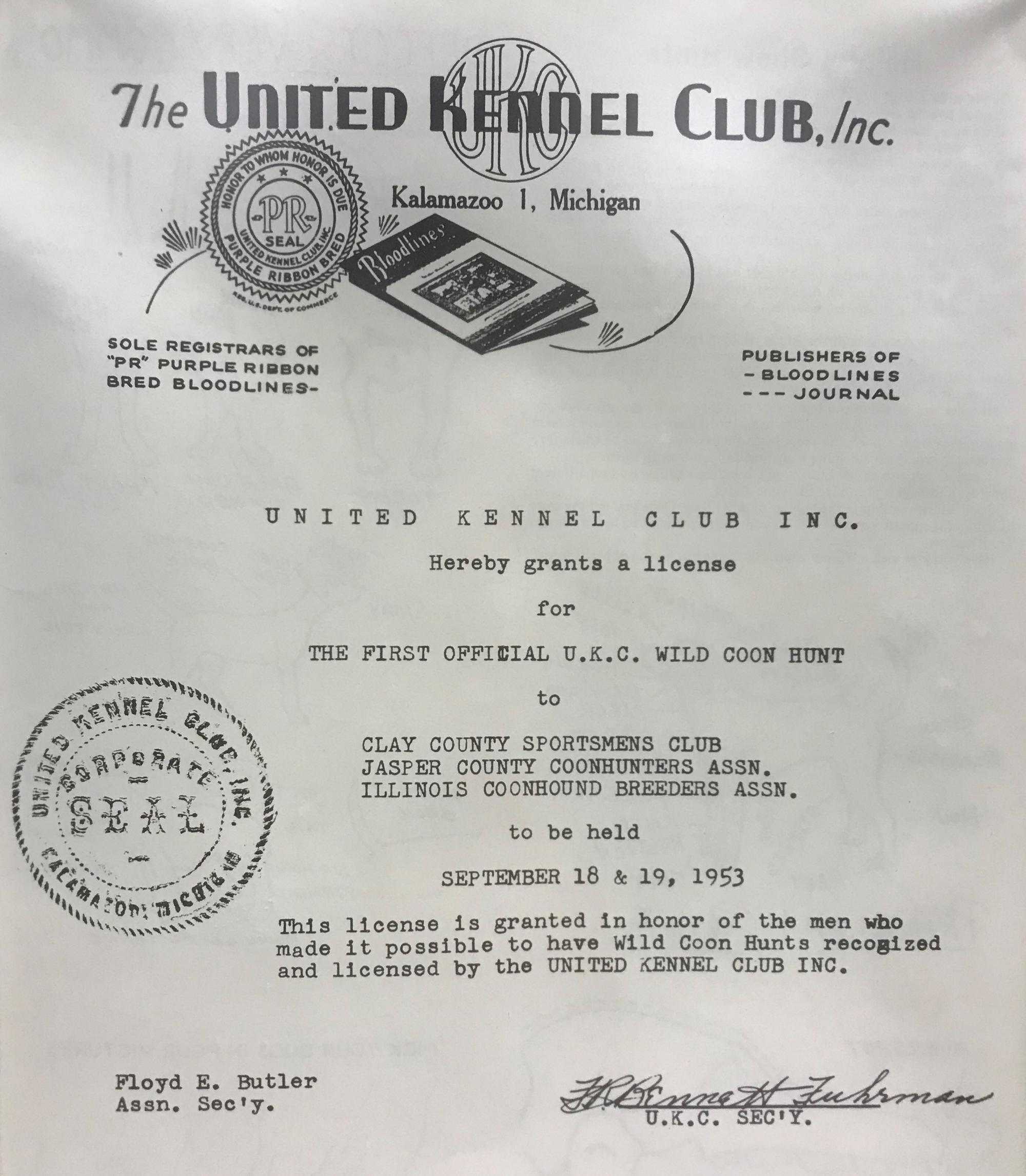 In an article written about the early days of nite hunts, the author Steve Fielder described the start of the hunt as follows.

From the beds of each truck, hounds whine anxiously; their tails thumping against the sides of their custom boxes. Doors swing open and men, five total, emerge from within. Each wears a headlamp and helmet in the fashion of a coal miner. As they move toward the backs of the trucks, light beams from their heads swing across the dark landscape like miniature beacons in the night. Ironworker's overalls to repel the sting of briar, the nettle and the itch weed are worn over jeans and flannel shirts. Rubber hip boots, rolled just below the knees top off wardrobes designed to shield the hunter from the perils of coon country.

One of the men, obviously the field general, turns his head to the side and squirts an amber stream from his mouth, the byproduct of a dip of smokeless tobacco packed snuggly between his cheek and gum. At his command, four hounds are freed from the boxes and leap from tailgate to ground, straining at the chain and leather leashes held firmly in the hands of the men.

The field general, removing a piece of paper from the pouch in the bib of his overalls, looks at a stopwatch dangling from a rawhide string circling his neck. Walking to the edge of a slough, a natural boundary between an endless cornfield and a vine-and-briar entangled woodlot, he speaks. As his first word, the hunters pull the hounds up short, scolding firmly at their attempts at freedom.

"Gentlemen, if there's anything you want to tell me about your dogs, let's hear it now. If not, the time is 9:05. All I need to hear from you is when you strike and tree your dog. If you have a question, we will discuss it and take a vote. Majority wins. When the dogs tree, the first one who beats me to the tree is the first one scratched. Got it? Good. Now let's cut'em loose!"

At the judge's command, the dogs lurch forward like Kentucky Thoroughbreds leaving the gate, their splashing fading into the summer night. Soon, the mournful call of a night bird and the electric-drone of a mosquito are the only sounds to be heard. Each holding his breath, the men strain to hear the bark of a familiar hound carried on the night breeze. The hunt has begun!

The author continues the article how competition is the heartbeat of the of the sport of coon hunting. Whether at its highest pitch in the heat of a World Championship or at its fundamental level as two hunting buddies sit on the tailgate on a Saturday night, the spirit of competition is what keeps the coon hunter coming back for more.

The article ends noting there were many who said it couldn't last and, in fact, there were still scoffers who say that competition hunting will go by the way of the steam engine and the 2c stamp

That article was written nearly 25 years ago. Here we are today, the second day in April of 2021 entering the weekend of Regions for the first ever UKC Tournament of Champions, leading up to Finals where UKC offers a purse of $200,000 to its winners. Did those pioneers of the sport ever dream such a day would come? I seriously doubt it. A lot of things have changed since then but that spirit of competition remains as high as it ever was.

With that I'd like to thank every hunter who qualified and wish everyone a good safe hunt and the best of luck to all!