Developed in the French province of Ariege, from a series of matings between the Grand Bleu de Gascogne, Grand Gascon-Saintongeois and local Briquet hounds, the Ariegeois excels in hunting hare in the dry, rocky regions of its homeland. (Note: “Briquet” is often mistakenly translated as “Beagle”, but actually does not denote any certain breed. Rather, the term is used to describe medium-sized hounds which are finer-boned, shorter-coupled and more compact than the larger “Grand” breeds.)

The Ariegeois was recognized by the United Kennel Club on January 1, 1993.

Lighter of frame and finer built than their Grand Bleu de Gascogne and Grand Gascon-Saintongeois forebears, the Ariegeois hounds nevertheless have retained a great amount of the character and quality enjoyed by their parent breeds.

Although the smallest and most finely-built of the “Blue mottled breeds of the Midi” (Grand Bleu de Gascogne, Grand Gascon-Saintongeois and Ariegeois), the Ariegeois is still a hound whose endurance and staying power is highly regarded by French houndsmen, and the breed must therefore immediately impress as a hound of substance. Considering the breed's hunting history, individual hounds should have moderate bone, and ample muscle.

Males are heavier than females. Defects such as bull necks, out at the elbows, loaded shoulders, or a beef steer profile should not be confused with masculinity. Likewise, defects such as a shallow muzzle, poorly-formed chest, extremely narrow pelvic region, and general frailty should not be confused with femininity.
Because the Ariegeois is first and foremost a hunting hound, scars (the result of honorable wounds) shall not be considered faults nor shall they be penalized by Judges. This includes cuts, nicks, notches on the ears, and/or ears that are frayed at the edges from working in brush, tall grass, etc.

Good speed; a degree of endurance not generally found in hounds of this size. A surprisingly deep, powerful voice and remarkable scenting ability. Of even temperament, essentially friendly and social. As a hunting/working scenthound breed, and being called upon to work in close proximity with other hounds and their handlers, aggression towards other hounds and people is to be considered a fault.

The muzzle is the same length as the skull, with a straight nasal bone. The lips are rather thin and tight. The upper lip must just cover the lower jaw, without giving the muzzle a pointed appearance.

The eyes are well opened and brown in color, with tight rims and an alert, bright expression.

The nose is black, with well-developed nostrils.

The thin ears are set on low and well back, turning well inwards; coming to the end of the nose when held along the jaw line.

The long, slightly arched neck is light and fine, without any trace of dewlap.

The somewhat sloping shoulders have ample muscle, but are not loaded; appearing as part of the body.

The forelegs are strong and straight.

The chest is moderately wide, deep and long and let down to the elbow. The ribs are long and moderately arched. The level back is short coupled and well supported. The well-muscled loins are moderately wide. The croup is fairly horizontal. The flanks are flat, with a slight tuck-up.

The thighs are long and muscular without excess. The hocks are well let down. No dewclaws.

The well-knit feet are of hare type.

The well-attached tail tapers to a point, and is carried saber fashion when working.

The fine coat is close and ample.

Skin pigment is pink under white hairs and black under black hairs. The lips, palate, sex organs and pads of the feet are black. The fine, supple skin is somewhat loose on the body, to allow for freedom of movement, but there are no wrinkles.

Disqualification: Any coat other than described in the standard.

White with jet black markings that are well defined. Sometimes mottled. Pale tan on the cheeks and above the eyes.

(A dog with a Disqualification must not be considered for placement in a conformation event, and must be reported to UKC.)
Unilateral or bilateral cryptorchid.
Viciousness or extreme shyness.
Albinism.
Undershot or overshot bite.
Any coat other than described in the standard.
Light (yellow) eyes. 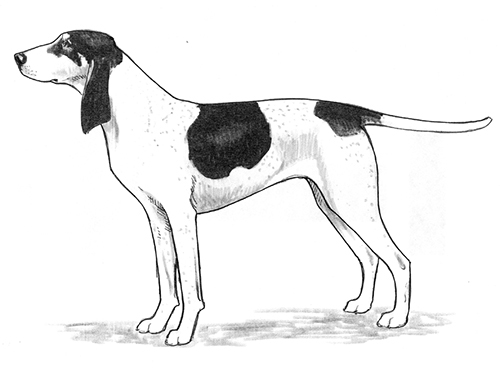