The four Sennenhunds were developed by the crossing of the Roman Mastiffs with the local Swiss working dogs during the time of the Roman invasion and conquest of Europe. These four breeds include the Greater Swiss Mountain Dogs, the Bernese Mountain Dog, the Entlebucher and the Appenzeller. It is generally accepted that the Greater Swiss Mountain Dog was the first of the breeds to develop, and the other three descended from it.

Some Spitz influence is also suspected in the heritage of the Appenzeller, reflected by the carrying of the tail curled over the back, in its high energy level and watchfulness, and a more refined head and body than those of the other three Sennenhunds.

The breed was and still is used as a cattle herder, as a home guardian and as an all-around farm dog. Currently the Appenzeller is also campaigned in obedience and Schutzhund work.

The Appenzeller was recognized by the United Kennel Club on January 1, 1993.

The Appenzeller is a medium-sized breed. They are muscular, but not massive. They have a short, smooth coat and a tail that is carried curled over the back. The Appenzeller is always tri-colored - with a black ground coat and rich rust and clear white markings.

Lively and high spirited, the Appenzeller is an intelligent, trainable breed that is a reliable worker and an excellent watchdog, due to its natural suspicion of strangers.

The slightly wedge shaped head is balanced in proportion to the body.

The skull is fairly flat on top and broadest between the ears, tapering in width towards the eyes. The occiput is not prominent. There is a moderate frontal furrow, and the stop is slight.

The muzzle is slightly shorter in length than the skull. It tapers gradually in width toward the nose but is never snipy. The lips are clean and rather tight. The cheeks are barely pronounced.

A full complement of strong, white teeth meet in a scissors bite. A level bite is acceptable. Missing premolars (PM1) and M3 molars are not faulted.

The rather small eyes are almond shaped, not protruding and set slightly obliquely. In Black dogs they are brown to dark brown; in Havana brown dogs, they may be lighter brown, but the darker the better. Eye rims black or brown depending on the color of the coat.

The nose is black or brown, depending on the color of the coat.

Faults: Short, pointed ears. Ears laying away from the head or carried badly.

Rather short, strong and clean.

The shoulder blade and upper arms are long and sloping, forming a moderate angle.

The forelegs are straight, lean and muscular. The pasterns slope slightly. Dewclaws may be removed from the forelegs.

In proportion, the Appenzeller is slightly longer than tall in a ratio of 10:9. The chest is broad and deep and there is definite forechest. The ribs are round to oval in shape. The topline is level; there may be a slight rise at the withers. The back is firm. The loin is strong. The croup is broad and flat, not sloping. There is a slight tuck up.

The well muscled hindquarters are moderately angulated at the hip.

Seen from the rear, the hind legs are straight and parallel and not too close together. The hock joint is fairly high and the rear pasterns are longer than the front pasterns. Dewclaws should be removed except in countries where it is not allowed.

The high set, strong tail is densely coated. It is carried curled tightly over the back when the dog is in movement. When the dog is relaxed the tail may be pendant in various positions.

Disqualification: A tail that does not curl tightly when the dog is in motion.

Double, firm and close fitting. The topcoat is thick and shiny; the undercoat is thick but should not show through the topcoat. Coat on the withers and back that is slightly wavy is acceptable, but not desirable.

The Appenzeller is tri-colored, with a base color of black or Havana brown, each having rust and white markings that are as symmetrical as possible.

White markings:
• Distinct white blaze which runs from the skull without break over the bridge of the nose and can reach totally or partially round the muzzle.
• White from chin, covering throat without break at chest.
• White on all four feet.
• White on tip of tail.
• White spot on nape of neck or half collar tolerated.
• Thin white ring all around neck tolerated but not desirable.

Disqualifications: Any base color other than black or Havana brown. Lack of tricolor markings. Albinism.

There is good reach in the forequarters and a powerful drive from the hindquarters, without any wasted action. As speed increases, the dog tends to single track.

(A dog with a Disqualification must not be considered for placement in a conformation event, and must be reported to UKC.)
Unilateral or bilateral cryptorchid.
Extreme viciousness or shyness.
Albinism.
Overshot or undershot bite.
Entropion or ectropion.
Wall eyes.
A tail that does not curl tightly when the dog is in motion.
Single coat.
Any base color other than black or Havana brown.
Lack of tricolor markings. 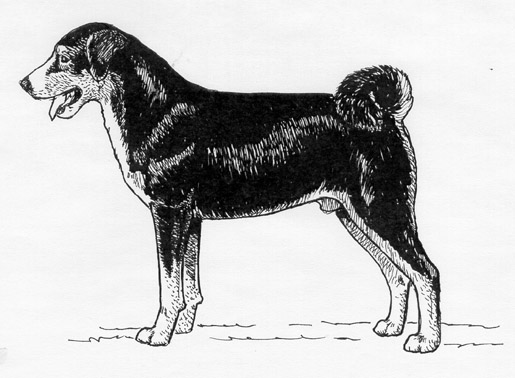