The first American Hairless Terrier, a female named Josephine, was born in 1972, part of a litter of purebred coated Rat Terriers. The breeder, Edwin Scott, began to develop the breed from Josephines descendants. Although he never used any dogs but Rat Terriers in his breeding program, it was always Scotts intention for the hairless dogs to be a separate breed. However, in 1999, when United Kennel Club recognized the Rat Terrier, Scott and his fellow breeders agreed to allow the hairless dogs to enter the UKC registry as Rat Terriers, hairless variety. Upon separation, all of the hairless Rat Terriers and all of their coated descendants, products of careful breeding to the finest coated Rat Terriers, were given the name originally chosen for the breed by Edwin Scott: American Hairless Terrier. While it may seem contradictory to have coated dogs in a hairless breed, it will be necessary for the foreseeable future to continue to include some Rat Terrier crosses until there are sufficient hairless dogs to maintain a separate and healthy gene pool.

The American Hairless Terrier was recognized by the United Kennel Club on January 1, 2004.

The American Hairless Terrier is a smoothly muscled, active, small-to-medium terrier. The preferred ratio of length of body (prosternum to point of buttocks) to height (withers to ground) to is 10:9. The head is broad, slightly domed, wedge-shaped, and proportionate to the size of the body. Ears are V-shaped, set at the outside edges of the skull, and may be erect, tipped or button. Both varieties may have a natural tail carried in an upward curve, or the tail may be docked in dogs of the coated variety. The American Hairless Terrier comes in a number of skin colors and patterns (hairless variety) and coat colors and patterns (coated variety).

Disqualifications: A short-legged dog whose proportions vary significantly from the 10:9 ratio lacks breed type and must be disqualified. Unilateral or bilateral cryptorchid.

The skull is broad and slightly domed. It tapers slightly toward the muzzle. The jaws are powerful with well-muscled cheeks.

The muzzle is well filled-out under the eyes, well-chiseled, and tapers slightly from the stop to the nose. Jaws are powerful and hinged well back allowing the dog to open his mouth wide enough to catch rats and other rodents. Lips are dry and tight with no flews. Lip pigment matches nose pigment.

The American Hairless Terrier has a complete set of good-sized, evenly spaced, white teeth. A scissors bite is preferred but a level bite is acceptable.

The nose is black or self-colored.

Eyes are set obliquely and are round, moderate in size, and somewhat prominent. Eye rims match nose pigment.

Eyes may be any color found in the coated variety.

Eye color ranges from dark brown to amber and corresponds with coat color. Hazel eyes are acceptable in dogs with lighter coat color. Blue or amber eyes are permitted in blue-colored dogs only, but a dark gray eye with gray eye rims is preferred.

Faults: Bulgy eyes; deep-set eyes; light-colored eyes in a dog with black coat color or black pigment; both eyes not of matching colors; eye with iris containing more than one color; wall or china eye.

Ears are V-shaped, set at the outside edges of the skull. Erect ears are preferred but tipped or button ears are acceptable. Matching ears are strongly preferred. Non-matching ear carriage should be penalized to the degree of the variation. Note: Ear carriage may not stabilize until a dog is mature. Dogs under one year of age should not be penalized for variations in ear carriage.

The neck is clean, moderately long, smoothly muscled, slightly arched, and tapers slightly from the shoulders to the head. The neck blends smoothly into well laid back shoulders.

Shoulders are smoothly muscled. The shoulder blades are well laid back with the upper tips fairly close together at the withers. The upper arm appears to be equal in length to the shoulder blade and joins it at an apparent right angle. The elbows are close to the body. Viewed from any angle, the forelegs are straight, strong, and sturdy in bone. The pasterns are strong, short, and nearly vertical.

A properly proportioned American Hairless Terrier is slightly longer (measured from prosternum to point of buttocks) than tall (measured from the withers to the ground), and length of the front leg (measured from point of elbow to the ground) should approximately equal one-half of the dogs height. Whether the dog is standing or moving, the line of the back is strong and level. The loin is moderately short, slightly arched, and muscular, with moderate tuck-up. The croup is slightly sloping. The ribs extend well back and are well sprung out from the spine, forming a broad, strong back, then curving down and inward to form a deep body. The brisket extends to or just below the elbow. Viewed from the front, the chest between the forelegs is well filled and of moderate width. Viewed from the side, the forechest extends in a shallow oval shape in front of the forelegs.

The hindquarters are muscular with the length of the upper and lower thighs being approximately equal. The angulation of the hindquarters is in balance with the angulation of the forequarters. The stifles are well-bent, and the hocks are well let down. When the dog is standing, the short, strong rear pasterns are perpendicular to the ground and, viewed from the rear, parallel to one another.

The feet are compact and slightly oval in shape. The two middle toes are slightly longer than the other toes. Toes may be well split up but not flat or splayed. Front dewclaws may be removed. Rear dewclaws must be removed.

The tail is set on at the end of the croup. The natural tail is thick at the base and tapers toward the tip. When the dog is alert, the tail is carried in an upward curve. When relaxed, the tail may be carried straight out behind the dog. The tails of the coated variety dogs may be docked. If so, docking should be between the second and third joint of the tail.

Puppies are born with a soft, vestigial down that generally covers the body. This down gradually diminishes until age 6 to 8 weeks, by which time the pup should be completely hairless. A mature American Hairless Terrier, Hairless variety, is free from hair except for whiskers and guard hairs on the muzzle, and eyebrows. Short, very fine (vellus) hair may be present on the body of a mature dog. The skin is smooth and warm to the touch. The hairless variety may sweat when overheated or stressed, but this is not to be faulted in the ring.

The coat is short, dense, and smooth, with a sheen. Whiskers are not removed.
Serious faults (Hairless variety): Vellus hair longer than 1mm on a dog over six months of age.

Hairless Variety: Any skin color is acceptable. The skin is usually parti-colored with an underlying skin color and freckles or spots of contrasting color. Freckles enlarge with age, and skin color will darken when exposed to the sun.

Disqualifications (Coated variety): Merle; absence of white; any solid color other than white.

The American Hairless Terrier ranges in height from 10 to 18 inches tall.

Faults: Height under or over allowed range; obesity.

The American Hairless Terrier moves with a jaunty air that suggests agility, speed, and power. American Hairless Terrier gait is smooth and effortless, with good reach of forequarters without any trace of hackney gait. Rear quarters have strong driving power, with hocks fully extending. Viewed from any position, legs turn neither in nor out, nor do feet cross or interfere with each other. As speed increases, feet tend to converge toward center line of balance.

(A dog with a Disqualification must not be considered for placement in a conformation event, and must be reported to UKC.)
Unilateral or bilateral cryptorchid.
Viciousness or extreme shyness.
Unilateral or bilateral deafness.
A short-legged dog whose proportions vary significantly from the 10:9 ratio. Hanging ears.
Natural bobtail.
Wire or broken coat.
Long coat.
Albinism.
(Coated variety): Merle; absence of white; any solid color other than white.

In UKC Conformation Shows, this breed is shown by variety in this order - Coated, Hairless. 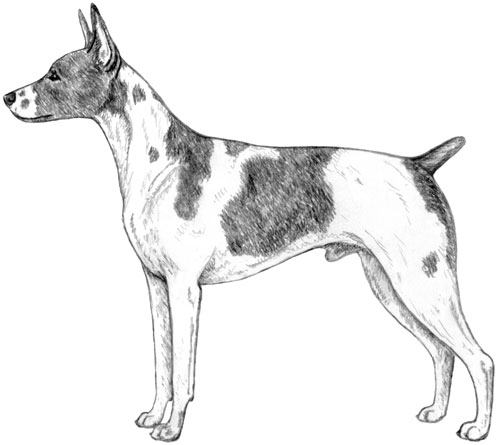 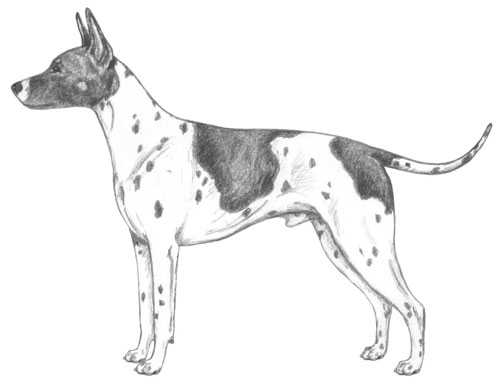 For more information on this breed, please visit the American Hairless Terrier Association