We are currently processing incoming Registration applications received through September 19.

Any departure from the following should be considered a fault, and the seriousness with which the fault should be regarded should be in exact proportion to its degree and its effect upon the health and welfare of the dog and on the dogs ability to perform its traditional work, which includes acting as a companion.

The American Eskimo is a member of the ancient and wide ranging Spitz family of dogs. One 18th century German historian claimed that the Spitz was the ancestor of all domestic breeds. White Spitzes were popular in Pomerania and in the coastal regions of Germany. Sailors traded the white dogs throughout Europe. When Queen Charlotte of England acquired several white Spitzes, the dogs became fashionable among British aristocrats. White Spitzes appear in several Gainsborough paintings.

German immigrants probably brought the white Spitz dogs to the United States, where they served as watchdogs, family pets, and circus dogs.

Known as the German Spitz in its homeland, the breed was renamed the American Eskimo in 1917. This was probably a reaction to the unpopularity during World War I of anything associated with Germany.

The American Eskimo was recognized by the United Kennel Club in 1913.

The American Eskimo is a well-balanced typical model of a working type Spitz dog, ranging in size from 9 to 19 inches. The body is well balanced and proportioned, appearing neither clumsy nor racy. The length of body from point of shoulder to the point of buttocks is the same as the height from withers to ground, presenting an overall square appearance. The head is wedge-shaped, with erect triangular ears, and readily distinguished black points (nose, lips, and eye rims). The American Eskimo has a thick, white double coat. The chest, neck, and forepart of the shoulders are typically covered with a lion-like mane. The backs of the forelegs are well feathered. The rump and hind legs down to the hock are covered with thick hair that forms the characteristic trousers. The ruff (mane) and long outer guard hairs are typically more profuse on males than females. The tail is richly plumed and carried over the back. With its alert, smooth carriage, the American Eskimo presents a picture of natural beauty, alertness, strength, and agility.

Disqualifications: Unilateral or bilateral cryptorchid, Any alterations of the dog other than allowed by the standard.

The American Eskimo is intelligent, alert, and energetic. This breed is loyal and friendly, but can be conservative with strangers. Overly aggressive or overly shy dogs are penalized.

Head size conforms proportionately to body size. The wedge-shaped head denotes power. The stop is well defined, but not abrupt.

The skull is broad and slightly crowned.

The muzzle conforms proportionately to head size and is covered with short, smooth hair. The jaws are strong. Lips are tight and black to dark brown in color.

A full complement of sound, white teeth that meet in a scissors bite is preferred. A level bite is permissible.

The nose leather is black to dark brown.

The eyes are medium, oval in shape but not slanted. Eyes are dark to medium brown and set well apart, giving an intelligent expression. Eye rims are black to dark brown. Eyelashes are white.

Ears conform to head size and blend softly with the wedge-shaped head. The ears are set well apart, and are triangular, slightly rounded at the tips, and held erect. The outer and inner parts of the ear are covered with short, smooth hair, with longer tufts in front of the ear openings. The skin on the inside of the ear is pink or slightly tinged with gray.

The neck is medium in length, conforming proportionately to the body; strong, carried proudly erect, and blending into the shoulders with a graceful arch.

The shoulders are laid back at an apparent 45-degree angle and are firmly set. The forelegs are parallel and straight, with strong, flexible pasterns to add spring to movement. The elbows are close to the body, turning neither in nor out. Leg length from elbow to ground is approximately equal to half the dogs height at the withers.

The body is strong and compactly built, but not too short-coupled. The length of body from point of shoulder to the point of buttocks is the same as the height from withers to ground, presenting an overall square appearance. Females may be slightly longer. The withers are the highest portion of the topline and blend gracefully into the back. The back is straight, level, broad, and muscular. The loins are well muscled and of adequate length to facilitate the easy rhythmic movement and powerful drive of the back legs. The chest is strong, showing broadness and depth. Depth of chest is at approximate point of elbows. The ribs are well sprung and begin an upsweep behind the ninth rib, which assures adequate room for heart and lung action. The belly has a slight tuck up just behind the ribs.

The hind legs are muscular and of adequate bone to conform to body size. The upper thighs are well developed and muscled. The stifles lay approximately 30 degrees off the pelvis. The hock joint is sharply defined and the hocks are well let down. When the dog is standing naturally, the hind legs are parallel when viewed from the rear, turning neither in nor out.

The feet are compact, oval in shape, and well padded with hair. The pads are tough and deeply cushioned. The feet neither toe in nor out when the dog is standing naturally. Front dewclaws may be removed at the owners discretion. Rear dewclaws are objectionable and should be removed.

The tail is set moderately high and is covered with long, profuse hair. It is carried over the back, not necessarily centered, when the dog is alert or moving. When the dog is relaxed, the tail may drop. When hanging down, the tailbone reaches to the hock joint.

The body is covered with a soft, thick, short undercoat. Longer guard hair grows through the undercoat to form the outer coat. The guard hair is free of any curl or wave. The mane covering the neck area is noticeably thicker, forming the ruff, which is typically more profuse on males than females. The front of the forelegs are covered with short, smooth hair, while the back sides are well feathered. The rump and hind legs down to the hock are covered with thick hair that forms the characteristic trousers. The tail is richly plumed.

Coat length will vary from dog to dog. Quality is more important than quantity.

Pure white is most desired. The ONLY other permissible colors are: white with biscuit or cream, and cream.

Disqualifications: Any color other than those stated above. Albinism.

Females: From 9 inches up to, and including, 14 inches.

The American Eskimo is a trotting breed. The dog does not pace at a trotting speed. The stride is quick, agile, and well timed. The gait, viewed from the side, is efficient, balanced, and vigorous, showing good reach in the forequarters matched with a strong rear action drive in the hindquarters during the trot. When walking, the dog will not single track, or brush, but as speed increases, they single track, the legs gradually angling inward until the pads fall on a straight line directly under the longitudinal center of the body. When moving, the topline remains strong, level, and firm.

Any departure from the ideal described in this breed standard is faulted to the extent of the deviation. Structural faults common to all trotting breeds are undesirable in the American Eskimo, even though such faults may not be specifically mentioned herein.

(A dog with a Disqualification must not be considered for placement in a conformation event, and must be reported to UKC.)
Unilateral or bilateral cryptorchid. Viciousness or extreme shyness. Blue eyes. Albinism. Blindness. Deafness. Any color other than those stated above. Any alterations of the dog other than allowed by the standard.

In UKC Conformation Shows, this breed is shown by variety in this order - Miniature, Standard. 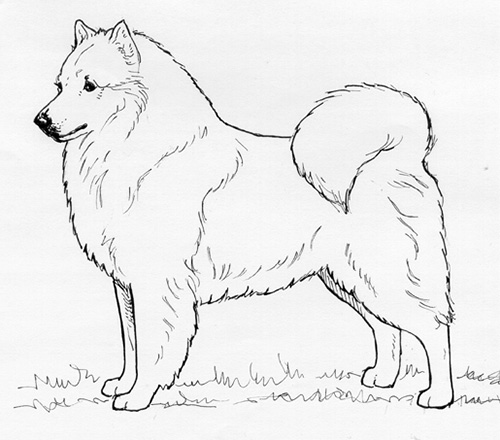