This standard was framed for the purpose of furnishing suggestions for breeding to the breeders in their aims toward improving the breed to higher ideals and to try and establish an international breed on this particular hound strain of bloodlines to look alike and have universal conformation. It will be noted that this standard has been in existence for more than 60 years and the hounds that we are following to day are the result of the loyal, dedicated, hard work of those that have preceded us.

The Black & Tan is one of many tracking breeds that were developed in the southern United States. The breed can trace its immediate ancestry to the American Foxhound and the Virginia Foxhound of colonial days, with probably the introduction of some Bloodhound stock. This latter would not only explain the coloration of the Black & Tan, but its tendency toward being larger boned than other breeds, its long ears and its famous cold nose.

The Black & Tan Coonhound is a working hound that trails his quarry completely by scent. He is strong and sturdy without being coarse or cloddy. He is balanced, agile and sound, with the ability to cover ground easily, efficiently and tirelessly in the pursuit of game.

Carried well up, very slightly domed and broad between the ears, never narrow.

Well-balanced with the other features of the head, medium square, with flews sufficient to give a square appearance. Nostrils large, open; black in color, never butterfly or pink.

Set medium low, well attached to head and devoid of erectile power, should reach approximately to end of nose when drawn out. Should hang gracefully, inside part tipping toward muzzle, should not be too pointed at tip, slightly oval, soft and velvety, hanging in a roll when head is raised.

Not too thick, nor too long, but graceful and strong; minimum of dewlap.

Short and slightly arched, well muscled and strong. This is one important part of the breed. A good rule to breed to is the same distance from root of tail to shoulder as height at shoulder.

Strong and muscular above hock. Slightly bent at hock and stifle, not cow hocked, free of dewclaws.

Tight and well padded. Toes short to medium and close knit. Neither cat-footed nor splay-footed. Foot to be proportionate to the size of the body.

Heavy, strong at root tapering there, rather long without brush, carried free, well-up, saber like.

Predominately deep, rich black, with tan trim covering not more than 10-15 percent of body. Small pumpkin seeds over the eyes. A little white on breast is not a fault, but no white elsewhere.

Disqualifications: Albinism. White anywhere other than a small patch on the breast.

Dogs being shown slightly under weight due to hunting will not be penalized. This is a working breed and should appear as such. Males: 50-75 pounds. Females: 40-65 pounds.

(A dog with an Eliminating Fault is not to be considered for placement in a bench show/conformation event, nor are they to be reported to UKC.)
Males under 23 inches or over 27 inches.
Females under 21 inches or over 26 inches. (Entries in Puppy Class are not to be eliminated for being undersize.)

(A dog with a Disqualification must not be considered for placement in a bench show/conformation event, and must be reported to UKC.)
Unilateral or bilateral cryptorchid.
Viciousness or extreme shyness.
Undershot or overshot.
Albinism.
Deaf.
Blind.
White anywhere other than a small patch on the breast. 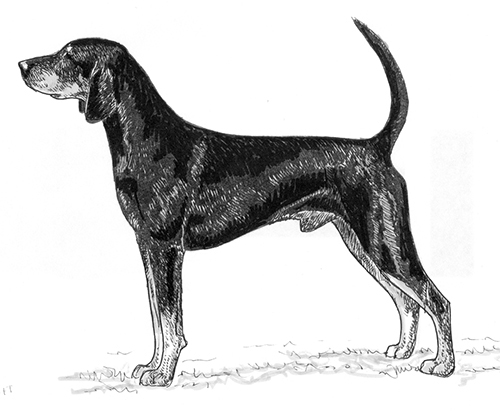