In the late 19th Century, the gamekeepers for Crown Prince Rudolf were using a hunting/shooting dog that bore a strong resemblance to the modern Alpine Drachsbracke. The breed was used as a tracking dog for wounded deer and a scenthound for hare and fox. In 1932 the breed was recognized in Austria, and in 1991 it was accepted as a Scenthound by FCI.

The Alpine Drachsbracke was recognized by the United Kennel Club January 1, 1996.

The breed has a fearless personality.

The skull is slightly arched. There is a well pronounced furrow between the eyes. The occiput is barely prominent. The stop is distinct.

The muzzle is strong and slightly shorter than the skull. The lips are close fitting, moderately rounded and have black pigment.

The Alpine Drachsbracke has a complete set of evenly spaced, white teeth meeting in a scissors or level bite. The absence of the first or second premolars is tolerated.

Set on high, without folds, hanging close to the cheeks, well rounded at the tips, the ears should reach nearly to the end of the muzzle.

Muscular, and not too long.

The shoulder blades are close-fitting, long, sloping, and strongly muscled.

The front legs are straight and strong. They appear short in relation to the length of the body.

The trunk is strong and well muscled, and elongated, in a ratio of length to height of 3:2. The chest is deep and broad, and there is a pronounced forechest. The depth of chest should be about one half the height at the withers. The back is straight, and the loin is short and broad. The croup is barely sloping. The belly is moderately tucked up.

The hindquarters are muscular, strong, and well-angulated.

Seen from the rear, the hind legs are straight.

Round, with tight toes, strong pads and black nails.

Set on high, strong at the root, reaching barely to the ground in length, and carried somewhat low. There is a brush of hair on the underside of the tail.

The preferred color is dark deer red, with or without interspersed black hairs. Also acceptable is black with clearly defined rust red markings on the head, chest, legs, feet and underside of tail. A white star on the chest is permitted.

Ideal height for males is 15 inches. For females it is 14 inches.

(An Eliminating Fault is a Fault serious enough that it eliminates the dog from obtaining any awards in a conformation event.)
Height less than 13 inches or greater than 16.5 inches. 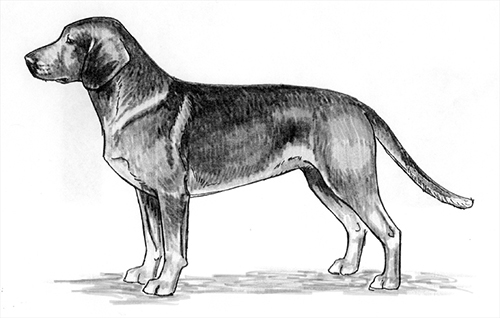