The Alentejo Mastiff (Rafeiro do Alentejo) originated in Portugal and was used as a herd guardian, moving with large herds of cattle as they were driven from pasture to pasture. The breed is likely to be descended from the huge dogs of the Tibetan highlands.
The Alentejo Mastiff was recognized by the United Kennel Club in 2006.

The Alentejo Mastiff is a large, powerful dog of rustic appearance. He has a bear-like head with a sober expression, a long, curving tail and a medium length, straight, dense coat that comes in a variety of colors.

A self-confident guard dog, this breed is particularly alert and vigilant at night. They are calm, self assured, independent and brave but not aggressive. Affectionate with their family and docile with children, they are suspicious of strangers and very useful as a defense, not an attack, dog.

The head is bear-like in shape, proportionate to the size of the body. The toplines of the skull and muzzle should be divergent.

Broad and rounded with a slight furrow between and above the eyes. Occipital bone not too prominent. The stop is not pronounced.

Medium in width, shorter than the skull, with a straight nasal bridge. The lips are thin and firm, black in color, slightly rounded in front and overlapping, giving a slight curve to the lower profile. The jaws are strong and well developed.

The Alentejo Mastiff has a complete set of evenly spaced, white teeth meeting in a scissors bite.

Oval in shape, with a slightly blunted tip, the nose is black in color.

Small and dark, set on a horizontal plane, giving a calm expression. The eye rims are black and fully pigmented. There should be no haw visible.

Triangular in shape, small, set on medium high and carried folded. The ears have little mobility. When the dog is attentive, they rise slightly at the base.

Straight, short and strong with a dewlap.

The shoulder blades are of medium length and set so that they are fairly apart at the tips. They are well covered with strong muscles. There is moderate angulation of the shoulder blade and upper arm.

Long, strong, straight and well muscled, set well apart. The pasterns are of medium length and sloping. The length of the forelegs from elbow to ground is slightly more than half the height at the withers.

The body is slightly longer than tall and bulky, with a topline that slopes slightly from withers to tail. The chest is very wide and deep. The back is long and straight. The loin is wide and slightly arched with muscles. The croup is broad and slightly sloping.

The hindquarters are strong and moderately angulated. The legs stand well apart.

The upper thigh is long and broad, the lower thigh of medium length. The hock joint is lean and moderately angulated and the rear pastern is not too short, slightly sloping, and may have single or double dewclaws.

The toes are long, well closed and not too arched. The pads are thick and tough. The nails vary in color.

Set on a gently sloping croup, the tail is long, thick and slightly curved at the base. When at rest, it should fall between the hocks and reach below them. In action the tail may roll upward.

Preferably of medium length, straight, dense and evenly covering the body. The skin is thick and rather close-fitting.

Black, fawn, yellow or wolf-like, with white markings, or white with markings of any of these colors, either dappled, streaked or brindled.

(A dog with a Disqualification must not be considered for placement in a conformation event, and must be reported to UKC.)
Unilateral or bilateral cryptorchid.
Viciousness or extreme shyness.
Undershot or overshot bite.
Yellow eyes.
Docked or naturally bobbed tail.
Albinism. 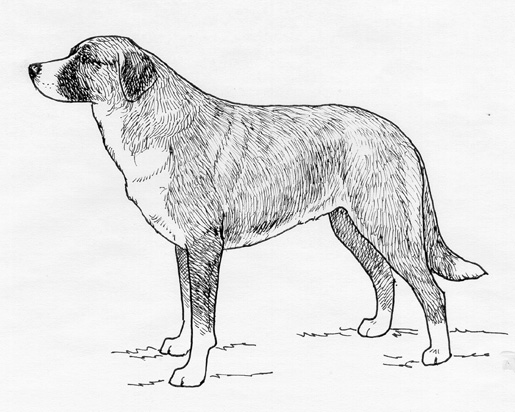