The Alaskan Malamute is one of the oldest Arctic sledge dog breeds. It was named after the native Innuit tribe called Mahlemuts that settled along the shores of Kotzebue Sound in the northwestern part of Alaska. The origins of the native people and their dogs is unknown, but it is certain that they were in the region for generations prior to the Asiatic sailors coming to Alaska and returning home with stories of native people who used dogs to pull sledges. When Alaska was settled by white men, the Arctic dogs were mixed with outside blood, but when the sport of sled racing became popular interest in maintaining a pure strain of Alaskan Malamutes rose and since 1926 the breed has been maintained in its original state.

The Alaskan Malamute was recognized by the United Kennel Club in 1947.

The Alaskan Malamute is a powerfully built, substantial dog with a deep chest, strongly muscled body and a thick, double coat that consists of coarse guard hairs that protect a wooly undercoat. He must have heavy bone, sound legs, good feet and all the other physical characteristics that are necessary for strength and endurance. The Malamute stands well up on his feet, giving him the appearance of activity and alertness. His gait is steady, balanced and tireless. He is not meant to be a speed dog; instead he is a dog that must be capable of pulling heavy loads for long distances at a reasonable pace.

When judging the Alaskan Malamute, their suitability for sledge hauling in the Arctic must be given first consideration, and the degree to which a dog is penalized should be in direct proportion to how much the particular fault would hamper the dog from doing his job.

An affectionate and friendly breed, the Malamute is not a one-person dog. He is a loyal and devoted companion, playful when young and impressive in his dignity when mature.

The head is broad and deep, but never coarse or clumsy. It should be in proportion to the rest of the dog.

The muzzle is large and bulky in proportion to the skull. It tapers just slightly in width and depth from stop to tip. The lips are close fitting.

Almond-shaped, brown in color, moderately large and set obliquely. The expression is soft and indicates an affectionate disposition.

Medium in size, but small in proportion to the size of the head. They are triangular in shape, slightly rounded at the tips, and set wide apart at the back of the skull. When erect, the ears should point forward. When the dog is working, the ears are often folded against the skull.

Black, as are the eye rims and lips, except in the red dogs, where brown pigment is acceptable. Snow nose is not a fault.

The shoulders are powerful and moderately sloping.

The forelegs are heavily boned and well muscled, indicating unusual strength. They are straight down to the pasterns, which should be short, strong and slightly sloping when viewed from the side.

In proportion, the Alaskan Malamute is slightly longer than tall. He is compactly built, but not short coupled. The breed should carry no excess weight. The chest is deep and well developed. Its depth is half the height of the dog, with its lowest part being just behind the elbows. The back is straight and slopes gently towards the hips. The loin is hard and well muscled, not so long as to compromise the strength of the back.

The hind legs should be broad and powerfully muscled through the thighs.

The stifles are moderately bent. The hock joints are broad and strong, moderately bent and well let down. When viewed from behind, the hind legs should be vertical standing, and move true in line with the movement of the front legs, not too wide or too close at any gait. Dewclaws on the hind legs are undesirable and should be removed.

The feet are large, tight and deep with well cushioned, tough pads and arched toes, giving them a compact appearance. There is a protective growth of hair between the toes.

The tail is set following the natural line of the spine. It is well coated and plume-like, carried over the back when the dog is not working. The tail should not snap or curl tightly against the back.

The Malamute is double coated, with a thick, coarse guard coat (which must never be overly long or soft) and a dense, oily, wooly undercoat that is one to two inches in length. The guard hairs vary in length, usually being the longest around the neck, down the back, over the croup, on the breeching and the tail. The coat tends to be shorter and less thick in warm climates. The coat is untrimmed except for the feet.

Colors range from light gray through the intermediate shadings to black, sable, and shadings of sable to red. Color combinations are acceptable in undercoats, points and trimming. Always with white on the underbody, parts of legs, feet and part of face markings. The markings should be either cap-like or mask-like on the face. A white blaze on the forehead, white collar or a spot on the nape is acceptable and attractive. Broken color extending over the body in spots of uneven splashing is undesirable. The only solid color allowable is all white.

The ideal freight size and weight for males is 25 inches at the withers and 85 pounds; for females it is 23 inches and 75 pounds. However, size consideration should not outweigh that of type, proportion and function. When all else is equal, the dog nearest the ideal freight size is preferred.

The gait is steady, balanced and powerful, showing agility for a dog of this size. From the side, there is strong drive from the rear and the forequarters have smooth reach. From the front and rear, the legs move true, not too close or too wide, though at a fast trot the feet will converge more towards a center line. A gait that is stilted or inefficient in any way is to be faulted.

(A dog with a Disqualification must not be considered for placement in a conformation event, and must be reported to UKC.)
Unilateral or bilateral cryptorchid.
Extreme viciousness or shyness.
Albinism.
Blue eyes. 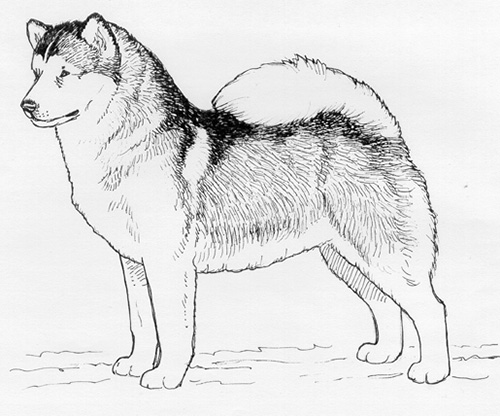