The Akita is the largest of Japan’s native breeds. It is a member of the spitz family, originally used for bear hunting, but at one point in history it was crossed with Tosas and Mastiffs to increase its size and value as a fighting dog. When dog fighting was prohibited in 1908, the breed was preserved and improved as a large Japanese breed. During World War II, the breed was nearly lost, and following the war, due to crossbreeding, the Akitas that remained were of three distinct types. Akitas of the Dewa lines, which had characteristics from Mastiff and German Shepherd crosses, were brought to the United States by members of the Military Forces. These dogs fascinated American dog fanciers and the breed rose quickly in popularity. Akitas in the United States developed as a type unique to this country and they are now quite different than the breed in its country of origin.

The Akita was recognized by United Kennel Club in 1980.

The Akita is a large, heavily boned spitz type dog that is sturdily built and well balanced. Its broad, triangular shaped head, which has small eyes and erect ears that are carried forward almost in line with the back of the neck, is a distinctive characteristic of the breed.

The Akita is friendly, alert and responsive, with a dignified and courageous demeanor.

The head is in the shape of a blunt triangle. It is massive, but in proportion to the size of the body. When the dog is relaxed, the head is free of wrinkles.

The skull is flat and broad between the ears. There is a shallow furrow between the eyes that runs well up the forehead. The stop is well defined but not abrupt.

The muzzle is broad, deep and full. It is two-thirds the length of the skull. The lips are clean and black in color. The tongue is pink.

A full complement of strong white teeth meeting in a scissors bite is preferred, but level bite is acceptable.

Black and broad. Liver color is permitted on white Akitas, but black is preferred.

Strongly erect and small in relation to the rest of the head. If folded forward to measure for length, the tip should reach to the upper eye rim. Triangular shaped, slightly rounded at the tip and wide at the base, the ears are set wide on the head but not too low. Viewed from the side, the ears are angled forward over the eyes, following the line of the neck.

The neck is muscular and thick, comparatively short, and widens gradually toward the shoulders. There is a pronounced crest that blends in with the base of the skull. There should be no excess of dewlap.

The shoulders are strong and powerful, with moderate layback.

The forelegs are heavily boned, and straight when viewed from the front. The angle of the pasterns is 15 degrees forward from vertical.

Faults: Elbows in or out. Loose shoulders.

In proportion, the Akita is slightly longer than tall, with females being slightly longer in body than males (a height to length ratio of 9 to 10 in males and 9 to 11 in females.) The chest is wide and deep, and the ribs are well sprung. The back is level and the loin is firmly muscled. There is moderate tuck up. The skin is pliant but not loose.

The hindquarters are strongly muscled, with width and bone that is comparable to the forequarters.

The upper thighs are well developed. There is moderate angulation at the stifle. The hocks are well let down. Dewclaws on the rear legs are generally removed.

Large and full, set high, and carried over the back or against the flank in a three-quarter, full or double curl, the tail always dips to or below the level of the back. On a three-quarter curl, the tip drops well down on the flank. The tail is strong at the root and reaches the hock when let down. The coat on the tail is coarse, straight and dense with no appearance of a plume.

The Akita has a double coat, with a thick, short undercoat and a straight, harsh outer coat that stands somewhat off the body. The hair on the head, lower legs and ears is short. The coat over the withers and croup is slightly longer than on the rest of the body, and on the tail it is longest and most profuse.

Disqualification: Altering of coat or general appearance by clipping or scissoring.

Any color including white. Colors are brilliant and clear, and markings are well balanced, with or without a mask or blaze. White Akitas have no mask. Pintos have a white background with large, evenly-placed patches covering the head and more than one-third of the body. Undercoat may be a different color than outer coat.

Brisk and powerful. with strides of moderate length. Back remains firm, strong and level. Rear legs move in line with front legs.

(An Eliminating Fault is a Fault serious enough that it eliminates the dog from obtaining any awards in a conformation event.)
Adult males under 25 inches, or females under 23 inches.

(A dog with a Disqualification must not be considered for placement in a conformation event, and must be reported to UKC.)
Unilateral or bilateral cryptorchid.
Viciousness or extreme shyness.
Overshot or undershot bite.
Pink noses, eyelids, or rims, butterfly nose.
Excessive entropion or ectropion.
Drop or broken ears.
Uncurled or sickle tail.
Altering of coat or general appearance by clipping or scissoring.
Albinism. 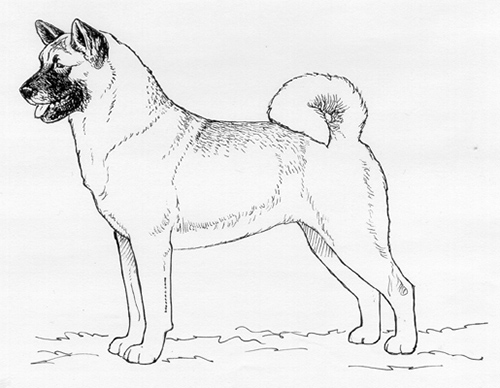